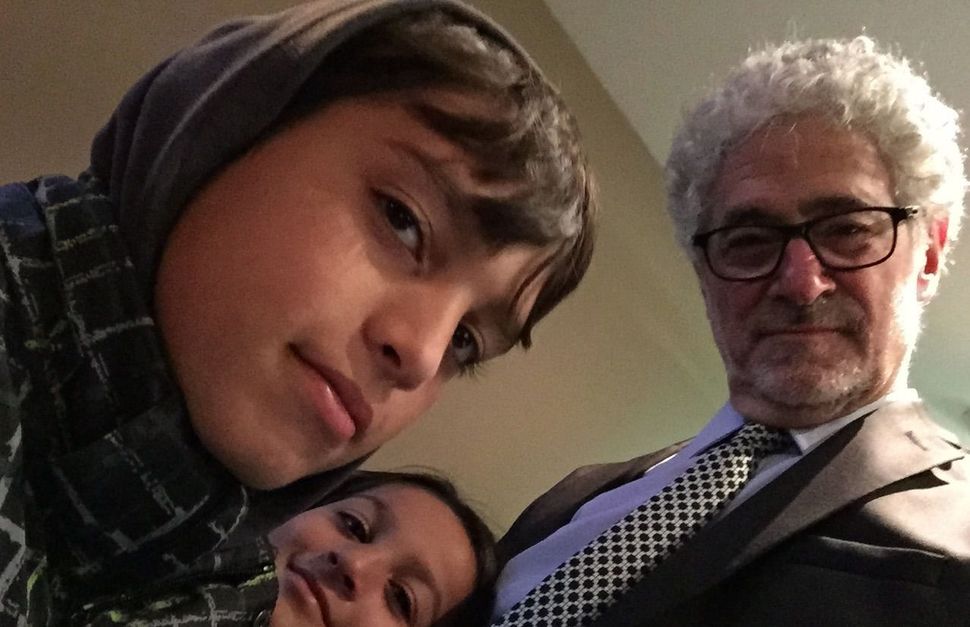 OK, here I am on the platform, waiting for my second tram. Midnight.

What’s this on the bench? A mother, a sick-looking baby, two children, two men. Obviously Syrians. Oh how sad.

But there are no refugees around here. They must be lost.

OK, back to the tram stop. Waiting, waiting.

Whoa, what’s that — something’s taken my hand? I look down. Oh no, the little girl. What are you doing holding my hand and looking up at me and smiling?

So you can say thank you in English. Nice. I got my own problems. Cute little thing, though, aren’t you.

Halla? Sweet name. Didn’t meet too many Halla’s in my Hebrew school. Ha ha. She shrugs.

What’s this? The Turkish guy running the noodle stand (in Vienna, most of the kebab stands now sell Asian food) has brought all these plates of food to the family. Won’t take money.

He looks at me, comes over and yells

I have this child holding on to my hand. She is like all children. About nine. She seems to think she has a friend. That makes her feel better. Which makes me feel worse.

“Uncle,” the Turkish guy says to me in German. “Can you help them? They are really lost.”

“Thank you,” says Halla again. Then she yawns. God knows how long she’s been awake, slept in a real bed.

Halla’s mother Rabia comes over and in broken English and with some gestures, tells me her baby, Nadia, was sick, she went to a hospital after they got off the train from Hungary, and now she, her husband Mohammed and Mohammed’s father Mais are separated from those who were going to a refugee center.

Halla’s 11-year-old brother Rabi is playing with baby Nadia, but he’s looking like he’s about to fall asleep and the two men are sitting there wringing their hands, looking all the world like a husband and father who cannot protect their wives and children.

I think of what I learned from interviewing Holocaust survivors: men live in the future — always planning. Women live in the now. Take away a man’s ability to plan for his family, and he can break down.

Well I can plan. Come with me, I say, and we go into the underground station. I put my credit card in the machine and tell Rabi to push this button and that, and out spit five tickets. He likes that. Then I show him where to punch the tickets to validate them. Suddenly he’s not so sleepy. He has a job to do. Halla is still looking up at me, searching my eyes.

We get off at the West Station and I ask a policeman about the refugee center. It’s full he tells me, raising his eyebrows.

Any suggestions? I ask. He sighs. Says nothing. Raises his hands like a man overwhelmed, then lets them fall.

I see a hotel. We enter. The desk clerk tells me if that I need two rooms I need two passports. Between all five of them, only Mohammed, Rabia’s husband, has a weathered Syrian passport. Then you can have one room, he says, but I’ll make it a big one for the mother and her three children.

Rabia talks with Mohammed. I go up to the desk, hand over my credit card, add breakfast to the bill and shake loose Halla’s hand so I can sign.

You’re going to have a hot shower, a clean bed and a great breakfast, I tell them. Rabia nods. Thank you. Halla repeats it. So does Rabi.

I turn to find that Mohammed and Mais are nowhere in sight, and Rabia says they have gone away to spend the night wherever they can. But why, I say, I’m just getting warmed up.

I walk this Syrian mother and her three children to the elevator and explain how a key card works to Rabi.

He nods, seriously. I got this, he says with his eyes. Wait a minute, I say. A selfie.

Halla lets go of my hand, and waves goodbye as the glass elevator ascends.

Edward Serotta is the director of the Vienna based Jewish historical institute, Centropa