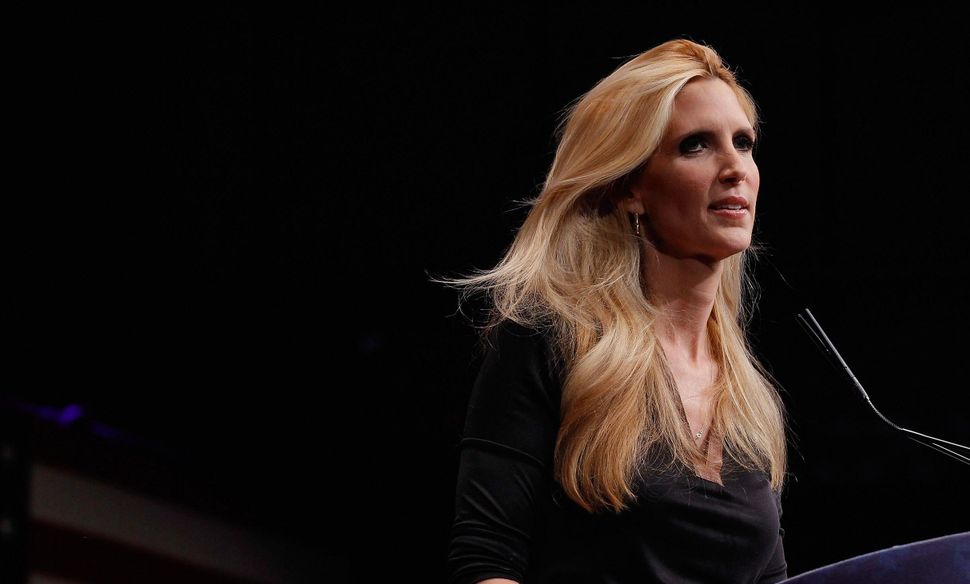 You don’t have to be paranoid to sense a new strain of anti-Semitism surfacing in American politics of late. Paranoia helps, but it’s not required.

We sense anti-Semitism when a media personality of Ann Coulter’s stature tweets about “f—king Jews” looming too large in Republican thinking. When The New York Times runs lists of Congress members with Jews marked in yellow. When President Obama and his allies speak loosely of big money and foreign influence while debating Middle East policy. When these things start happening almost weekly, it doesn’t require paranoia to sense an ancient prejudice rearing its head.

Paranoia helps, but it’s not necessary. All that’s really needed to see this as a wave of anti-Semitism is a very short attention span, or a willful obtuseness about the fast-changing nature of Jewish activism in the American political arena.

The change is tectonic; it affects not only the Jewish community, but also the larger American public square. This past summer, the organized Jewish community — that is, the major Jewish advocacy organizations, backed by much of the most militant grass-roots — plunged headlong into an intensely partisan battle against the administration. It landed some punches and drew some blood. That’s changed the rules in several important ways that most of us have barely recognized, much less adapted to.

For anybody keeping score in the Iran debate, how the Jews match up against their political foes is too important an issue to ignore. Unfortunately, it’s an issue nobody knows how to talk about. Tradition and instinct tell us there’s a special name for foes of the Jews: anti-Semites. Individual Jews may be good or bad, but the Jews as a collective are, we insist, on the side of the angels. If the Jews — the collective — are in a fight, someone must be picking on them. It can’t be a fair fight.

But what should we call it when the organized Jewish community plunges willingly, en bloc, into a pitched battle — White House vs. Congress, Washington vs. Jerusalem — and gives as good as it gets? Observers don’t know how to keep score when all the normal political calculations end up sounding like anti-Semitic tropes: How much money is on the table, What factors are influencing lawmakers’ decisions? What role do other countries play? What’s the likelihood failure will lead to war?

The answer is, people will keep score the best they can, because it’s too important to ignore. The discussion will be messy, because the old rules may be obsolete, but nobody knows what the new rules are. Advocates of Jewish rights — often the same advocates battling the administration — will howl about the overtones of anti-Semitism in the debate. But that will only fuel more debate, as cynics assume that the advocates are crying victimhood for political advantage. Or perhaps just trying to keep their tactics hidden.

What’s more, the very novelty of the newly exposed Jewish profile has sparked a minor flood of media coverage, with special focus on the apparent rift within the Jewish community between the pulpit and the pews. It seems as though nearly every major media outlet, from The New York Times, The Washington Post and The Wall Street Journal to The Nation, Slate and The Weekly Standard, has weighed in at least once on the parochial minutiae of American Jewish opinion and the legitimacy of Jewish leadership. Our anguish has become water-cooler gossip.

This is not the first time the Jewish organizational establishment has clashed with the White House. It happened in 1991, when the first President Bush linked Soviet Jewish resettlement aid to West Bank settlement construction. It happened in 1981, when President Reagan decided to sell AWACS spy planes to Saudi Arabia. It happened in 1974, when President Nixon tried to block the Jackson-Vanik Amendment linking Soviet-U.S. trading rights to Soviet Jewish emigration rights. There have been wins and losses, but nobody ever feared for the future of America-Israel relations or the fate of the Jewish community. Not until now.

The change has a number of causes. One is the growing comfort and affluence of American Jews. It’s easier than previously to throw one’s weight around. There’s less caution. Jewish advocacy is thus a more unabashedly visible political force, prompting more comment — and pushback.

Another factor is the nature of this fight. Past disputes usually concerned issues of primal urgency to Israel but of only secondary importance to Washington. On Iran, both governments are defending their own fundamental national security. That’s raised the stakes, and the heat.

Yet another is Washington’s toxic partisan atmosphere. Jewish community advocates used to stay above the partisan fray and maintain good ties with all sides, even when they disagreed. That’s much harder in today’s atmosphere.

And Prime Minister Benjamin Netanyahu’s affinity for Republicans and suspicion of Democrats makes the old nonpartisanship nearly impossible. Every previous Israeli prime minister made preserving U.S.-Israel ties his top priority. Netanyahu seems to see little point in currying favor with the Obama White House. That forces Jewish institutional leaders to make a choice. For those who believe Israel’s survival is at stake, the choice seems inevitable.

Remember, too, that when Netanyahu and Obama entered office almost simultaneously in 2009, each was determined to roll back the policies of his predecessor — Obama by repairing U.S. ties with the Muslim world damaged under President George W. Bush, Netanyahu by rolling back the weakness he thought Ehud Olmert showed to the Palestinians. From the start, they were foiling each other’s plans and angering each other’s constituents.

Finally, Netanyahu has tinkered with some long-standing assumptions about Israel-Diaspora relations. Since Israel’s founding, its leaders have sought to avoid actions that might suggest dual loyalty among Jewish citizens of other countries. Netanyahu, reared largely in America, seems to consider that caution anachronistic. From defiant actions like denouncing White House policies before Congress, to subtler signals like appointing to Washington successive ambassadors who are former Americans now loyal to the Jewish state, he’s shown repeatedly that the old diffidence is gone, shame replaced by pride. In his view, there’s no reason to fear sending American Jews into battle against their own government.

The trouble is, changing the rules of Jewish advocacy, as Netanyahu is doing, brings consequences, and it’s not clear that American Jews understand or welcome those consequences. As the Jewish community’s representative bodies enter the swamp of Washington partisan politics, the Jewish community as a whole comes to be seen as part of that swamp and subject to its rules, including the insults and dirty tricks that other partisan factions are used to.

Ordinary Jews, mostly liberals and Democrats, find themselves reviled for positions that they don’t support, and in brawls for which they never signed up. Many will walk away. The moral authority that American Jewry acquired through a century of standing above the partisan fray will be lost.

Is this outcome inevitable? Probably not. There’s no need to be paranoid. But it couldn’t hurt.