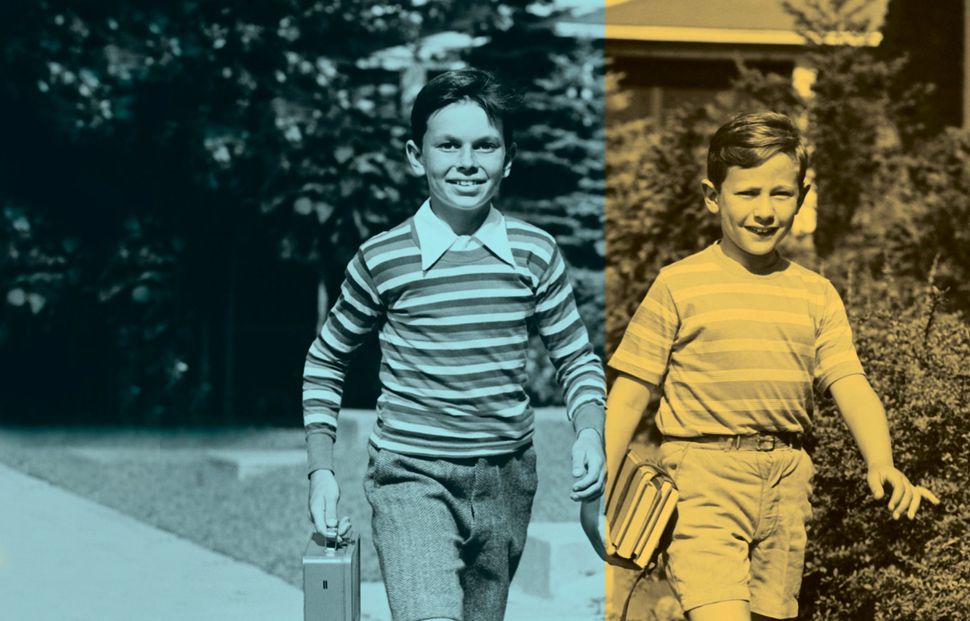 Several months before the Second Vatican Council adopted its landmark document, Nostra Aetate, my family moved about a half-mile across our New Jersey hometown. That minor distance spanned the dividing line between the attendance zones for two elementary schools, meaning that at age 10 I was abruptly separated from my childhood friends. Though I went to public school, and my atheist parents did not even belong to a synagogue, our family was culturally Jewish and so were most of those friends.

Amid my alien new surroundings on North Seventh Avenue, my mother was eager to call my attention to a family that had just moved into the house across the street. In the way mothers know such things, she knew the family had a son roughly my age. I made the acquaintance of that boy, Jimmy Lyons, over a game of wiffle ball, if memory serves. He soon introduced me to Tim Mulligan, a classmate of his at the local Catholic school. With Tim’s elder brother Danny as the fourth player, we began a years-long series of two-on-two football games, not quite tackle but a lot rougher than touch.

It never occurred to me at the time that my friendships with Jimmy and Tim, which continue to this day, had to do with anything more than our congruent ages and coincidental interests. Decades of passing time have taught me otherwise. As Pope Francis makes his first visit to the United States, and as the 50th anniversary of Nostra Aetate (Latin for “in our time”) approaches, on October 28, I recognize that the friendship I formed with Jimmy and Tim, and the broader pattern of connection it wove between our three families, was fortified by the same revolution in Catholic-Jewish relations that produced the Vatican’s path-breaking statement.

Younger generations of American Jews, I realize, cannot recall or even imagine a time when Catholics might be seen as antagonists or tormentors or bigots. The Jewish ecumenical concerns of today hinge much more on how we get along, or don’t, with Muslims and evangelical Christians. Yet the Jews of my parents’ time, and of centuries before them, experienced a highly charged encounter with Catholics and Catholicism. In the American urban neighborhoods to which Eastern European Jewish immigrants flocked, it was Catholics more than any other brand of Christians whom our tribe was likely to encounter next door.

My father, a man not given to lamentations about Jewish victimhood, often told me the story of being run off a skating pond by people calling him a Christ-killer. The uncles on my mother’s side of the family had tales of being chased home from school by the Irish and Italian toughs of the Bronx. My mother, alternatively, fell deeply in love with a Catholic man named Charlie Greco and they intended to marry. Greco’s family approved of the impending union, but my grandmother, who had lost virtually all her relatives to the Nazis, pointed a finger at Greco and said, in Yiddish, “They’re the ones who killed my family.” In her vision, distorted by tragedy, this World War II veteran was somehow synonymous with the fascists he had fought.

What underlay all these personal experiences of antipathy was the traditional Catholic teaching that the Jews had killed Jesus Christ. This concept of deicide, of collective Jewish guilt, echoed through the centuries of pogroms and blood libels. Martin Luther may have broken with many elements of the Holy Roman Church, but he clung to the doctrine of anti-Semitism. It hardly needs to be added that the Nazis, officially secular as they were, drew on the reservoir of Christian Jew-hatred.

America, of course, operated differently. In a nation dominated by Protestants, Catholics and Jews came together as fellow strangers, fellow outcasts. The Ku Klux Klan despised Catholics and Jews as it did African-Americans, albeit not as lethally. So in cities like Denver, St. Paul and New York, Catholics and Jews became political allies in local elections; nationally, the two faiths fervently supported the 1928 presidential candidacy of Al Smith, the first Catholic to run for the White House, laying the groundwork for Franklin Roosevelt’s New Deal coalition. Yet even in the heyday of that coalition, the anti-Semitic Catholic populism of the Rev. Charles Coughlin attracted a massive radio and print audience. In the early 1950s, the anti-Communist hysteria orchestrated by Senator Joseph McCarthy, a Roman Catholic, carried the not-quite-spoken insinuation that a whole lot of Jews were Reds.

Against the background of these turbulent, midcentury decades, what would become Nostra Aetate gradually took form among the Catholic theological elite. As John Connelly recounts in his essential book “From Enemy to Brother” many of the strongest advocates for reversing Catholic teaching about Jews and Judaism were Jewish converts such as Johannes Oesterreicher, whose parents died in Nazi camps.

“The high percentage of Jewish converts like Oesterreicher makes sense,” Connelly writes. “They hoped to resolve a tension within themselves between past and present in the church, returning Catholicism to the Jewish sources of its heritage, which, as St. Paul foresaw, Christians have always been tempted to disown… Nostra Aetate emphasized the facts obvious for centuries: the Jewishness of Jesus, of the early saints, and of holy scripture. The broader function of the converts, whether from Jewish or Protestant families, in promoting tolerance also makes sense.”

Not only did Nostra Aetate renounce the deicide charge, but it affirmed God’s covenant with the Jews, ended the Catholic policy of seeking the conversion of Jews, and encouraged interfaith dialogue with Jews. Nostra Aetate made possible the extraordinary spectacles of John Paul II’s papacy —his pilgrimages to the Western Wall and Yad Vashem, the establishment of diplomatic relations between the Holy See and Israel, his declaration at Rome’s main synagogue that Jews are “our elder brothers.”

What matters as much as the radical shift in Catholic theology is the effect of that shift on the ordinary lives of Catholics and Jews. Nostra Aetate reinforced and commended the sheer normality of my friendships with Jimmy, Tim and their families. We celebrated together at weddings. We mourned together at funerals and shivas and wakes. My father, reared in an anarchist colony, and Tim’s father, a Goldwater Republican, bonded over their mutual disdain for John F. Kennedy as an opportunistic fraud. Growing up as much in two Catholic households as in my own, I savored the easy banter that makes light of denominational difference. One time after the Six Day War, around the Lyons’ supper table, when I was boasting about Israel’s military prowess, one of Jimmy’s older brothers waved a dismissive hand at me and said, “Eat a ham sandwich, kid.”

Poll numbers bear out my personal experience. A Gallup poll in 1952 found that about one-third of Catholics believed Jews had too much power in America — a classic anti-Semitic trope. In 1966, the year when Nostra Aetate began to be promulgated as church doctrine, Gallup showed that barely one-tenth of Catholics espoused that prejudice. In a 2014 survey by the Pew Research Center, Catholics gave a more favorable rating to Jews (61%) than to any other denomination. The Jewish positive rating for Catholics, at 58%, trailed only the number for Buddhists among religious groups in America.

We Americans often hear, and uncritically accept, the concept of “Judeo-Christian tradition.” As the historian Deborah Dash Moore reminds us in her book “GI Jews,” this putative tradition was actually fabricated for purposes of building morale among American soldiers during World War II. If that expedient creation has grown into something more genuine, particularly among Catholics and Jews in this country, then much of the credit belongs to Nostra Aetate, even if it was written in Latin and enacted in Rome.

Samuel G. Freedman, a regular contributor to the Forward, is the author of seven books and is a journalism professor at Columbia University.