The Last Time Children Were This Vulnerable Was World War II 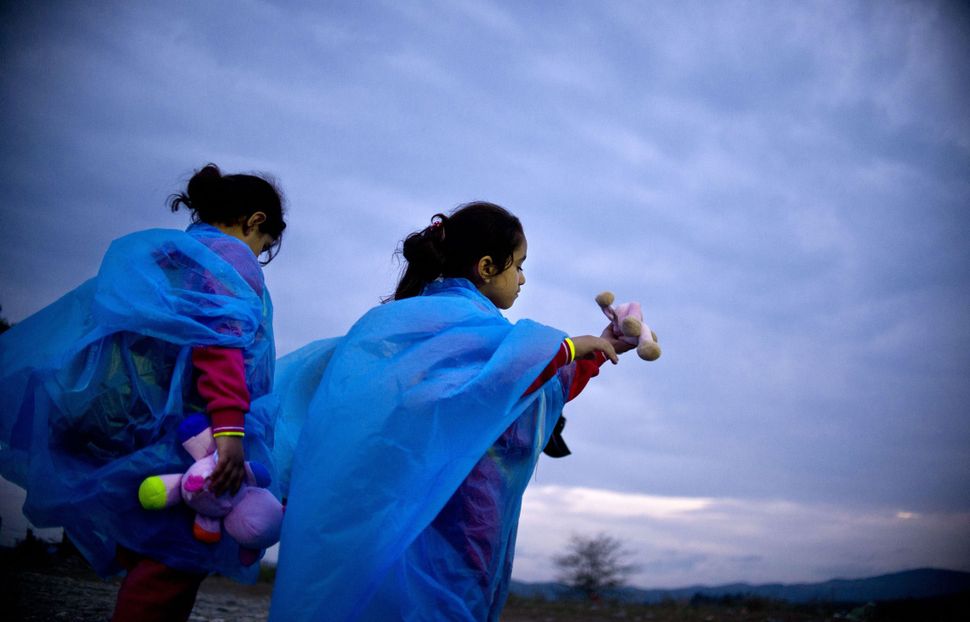 On the Move: Migrant girls play with toys at a camp near Gevgelija, Macedonia, after crossing the border from Greece. Image by Getty Images

Preparing for the High Holidays, I ask myself: “Have I done enough this year? Have I made a difference? What more can I do?” This year, these questions brought a particular picture to mind: the haunting image of Aylan Kurdi, the little Syrian boy whose body washed up on the shore of a beach in Turkey. That photo reminded me that this grave international refugee crisis affects children in particular. And with its wave of movement into Europe, the crisis evokes memories, for my family personally, of another era during which children were the most vulnerable victims of conflict.

My mother at age 6 and her brother at age 4 were among those who crossed the ocean in 1939 in an effort to ensure their survival. Pushed onto a ship by their parents, they were escorted safely by a distant family friend who deposited them in the United States. There they settled in an orphanage on the Lower East Side of Manhattan. Thankfully, our borders were open to them and they were spared the horrors that befell other children who stayed behind in Vienna.

From the moment I heard my mother’s story, I have thought about the agony her parents endured as they made the decision to send away their children, knowing it was their only hope for a future for their kids. And I have wondered exactly what my mother and her brother were thinking as they boarded that ship. Did they understand that the choice their parents were making was one that grew out of a love so strong that they chose to bear the pain of separation if it meant survival? Or, as children too young to understand, did they feel abandoned?

It is not my intention to weigh the horrors of the Holocaust against the current crisis. But it is the legacy of that tragic time that raises these same questions in my mind, as I watch thousands of children crossing borders, many of them without their families.

There are now about 30 million children around the world who have been forcibly displaced from their homes. They include refugees from conflict, those internally displaced, asylum seekers, migrants and so on; regardless of their formal status, we must remember that they are children first. The figures are startling: There are more children on the run today than at any time since World War II.

While the focus today is primarily on refugees streaming out of Syria, there are millions of other children fleeing parts of Africa, Asia and Central America. These children on the run are particularly vulnerable to predators and criminal behavior. Many, separated from their families, are subject to exploitation, physical and sexual abuse, violence and trafficking. They have little access to the basic necessities of life: health care, education, nutrition and clean water, and protection from violence and abuse. For most of them, their vulnerability begins in their homeland, but it continues on their long journey and does not stop when they reach their country of destination.

We can help. We can provide adequate health care and shelters that keep children and their families together. We can insist that the best interests of children are put first in assessing asylum and other refugee statuses. Finally, we can hold local governments accountable for preventing abuse and crime against children.

Governments and humanitarian organizations should also deploy adequate numbers of child welfare experts to refugee camps and transit facilities. And to prevent children as well as adults from becoming refugees in the first place, the international community must address the root causes of displacement — particularly through more vigorous diplomatic efforts to resolve conflicts in Syria and other countries.

As we Jews celebrate the holidays, we are called on to remember those who are in need. We should pause to consider the most vulnerable among us: the millions of children who have been forced from their homes.

Soon we will celebrate Sukkot, marking the Exodus and the 40 years when the Children of Israel wandered in the desert. What better way to honor this sacred holiday than to stop the exodus being forced on innocent children today?

Caryl Stern is the president and CEO of the U.S. Fund for UNICEF.

The Last Time Children Were This Vulnerable Was World War II