No, Ann Coulter Is Not an Anti-Semite 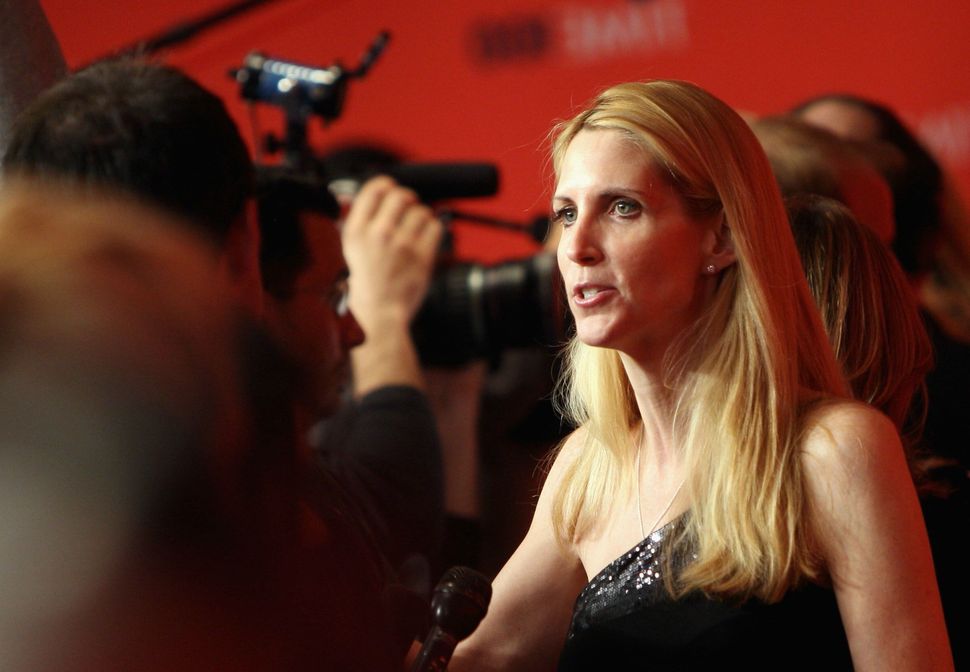 (JTA) — During the course of the second Republican presidential debate, Ann Coulter, the well-known commentator, writer, speaker and provocateur, tweeted: “How many f—ing Jews do these people think there are in the United States?”

Her explanation was that she had grown frustrated with the candidates’ remarks that concentrated on things nearly all Republicans agree on – admiration of Ronald Reagan, opposition to abortion and support for Israel – and ignored what she considers the biggest domestic problem facing America: immigration, both legal (under current law) and illegal. She regarded the candidates’ remarks as “pandering” to various Republican constituencies and tweeted out a series of critical and angry comments, including the one about Jews, in response to repeated pledges to support Israel.

She was rightly condemned by Republicans and Democrats alike for the tweet. How could she not be? It was indefensible. And it did damage to Republicans, conservatives and supporters of Israel.

But that should not be the end of the discussion.

The tweet raises a number of important questions. These include whether Ann Coulter is an anti-Semite, who we should label an anti-Semite and who the enemies of Jews are in America today.

The first is the easiest. Ann Coulter is not an anti-Semite. Those Jews who think she is point to two pieces of evidence: the recent tweet and something she said in a 2007 interview with Donny Deutsch, a TV personality who happens to be Jewish.

In that interview, she said that America (and presumably the world) would be better if everybody were a Christian. Deutsch asked if that meant all Jews should become Christian. Coulter said yes and Deutsch was offended. He was further offended when she labeled Christians, including herself, and Jews who became Christians “perfected Jews.”

Against this is a lifetime of defending Jews and Israel. Every mention of Jews or Israel I’ve read in any of her books is a spirited defense of Jews and Israel, or an attack on those who attack Jews and Israel. I should add, for what it’s worth, she has been to my home twice for Shabbat dinner. Indeed, she has said that experiencing Shabbat and reading the explanation for it in my book, “The Ten Commandments: Still the Best Moral Code,” have moved her to start observing a Sabbath. I guess you can say she might become a perfected Christian.

Her remarks to Deutsch were hardly anti-Semitic.

Second, if theological beliefs render one a hater, most religious Jews would have to be considered haters. That would include all those Orthodox Jews who consider Christianity idol worship and therefore won’t enter a church. And it would include all Jews who believe, as I do, that the Jews are the chosen people.

I have worked with evangelical Christians for 20 years, regularly speak at their conventions and churches, and can attest to the sincerity of their support for Jews — it’s all the more remarkable given how much contempt many Jews heap on them.

And no, they don’t support Israel in order to hasten the apocalypse and the Second Coming. People who dislike the Christian right have simply made that up in order to discredit their support. There is nothing in the New Testament that suggests this. Evangelical leaders such as Pastor John Hagee, the founder of Christians United for Israel, have said repeatedly that the timing of the New Testament prediction of Armageddon is solely in God’s hands. It is impossible for Christians to do anything to hasten the return of Jesus.

Evangelicals support Israel primarily because they believe God’s promise to Abraham in Genesis that He will bless those who bless the Jews and curse those who curse the Jews. They also believe that Israel is the morally superior side in the Middle East conflict.

I might add, however, that even if the reason evangelicals supported the Jews and Israel were to hasten the Second Coming – so what? If tens of millions of Christians will support Jews until Jesus returns, isn’t that a good thing?

In addition, epithets are not always a good indicator of who our enemies are. Harry Truman wrote home when he visited New York City that he was in “kike town” and wrote very disparaging things about the Jews in his diary. Yet, as president, he became the man who had America recognize the newly formed state of Israel within minutes of its declaration of independence — against the advice of his entire State Department.

Likewise, when Hillary Clinton was accused of calling a campaign aide a “f—ing Jew bastard” – an account attested to by three witnesses – I wrote a column for The Wall Street Journal defending her against the charge of anti-Semitism. There was simply nothing in her behavior to suggest that she is an anti-Semite.

We are very right to be worried about hatred of Jews and Israel. But Israel hatred and anti-Zionism – today’s expressions of anti-Semitism – aren’t coming from Ann Coulter or her side of the political spectrum. They are almost always to be found on the left – in America and everywhere else outside the Muslim world. Our universities, for example, are the center of Israel hatred in America.

Thoughtful Jews on the left should be experiencing cognitive dissonance these days. The institutions they most revere – the universities – are the most anti-Israel institutions in America, and the groups they most fear – conservatives and Christians – are Israel’s and the Jews’ best friends.

Ann Coulter aimed her famously provocative rhetorical gun at her intended target – the GOP candidates – and instead hit an innocent bystander, America’s Jews. When you harm someone, even accidentally, you owe an apology. Her tweet hurt her, her cause and the Republican Party as well as Jews, and she should say she’s sorry. But she is not an anti-Semite.

Jews shouldn’t accuse people of this when it isn’t true – whether it is Ann Coulter or Hillary Clinton.

Dennis Prager is a nationally syndicated talk show host heard on 140 radio stations across America, a New York Times best-selling author of six books and a contributing editor at the Jewish Journal of Los Angeles.

No, Ann Coulter Is Not an Anti-Semite