It’s Not Quite a Third Intifada — Yet 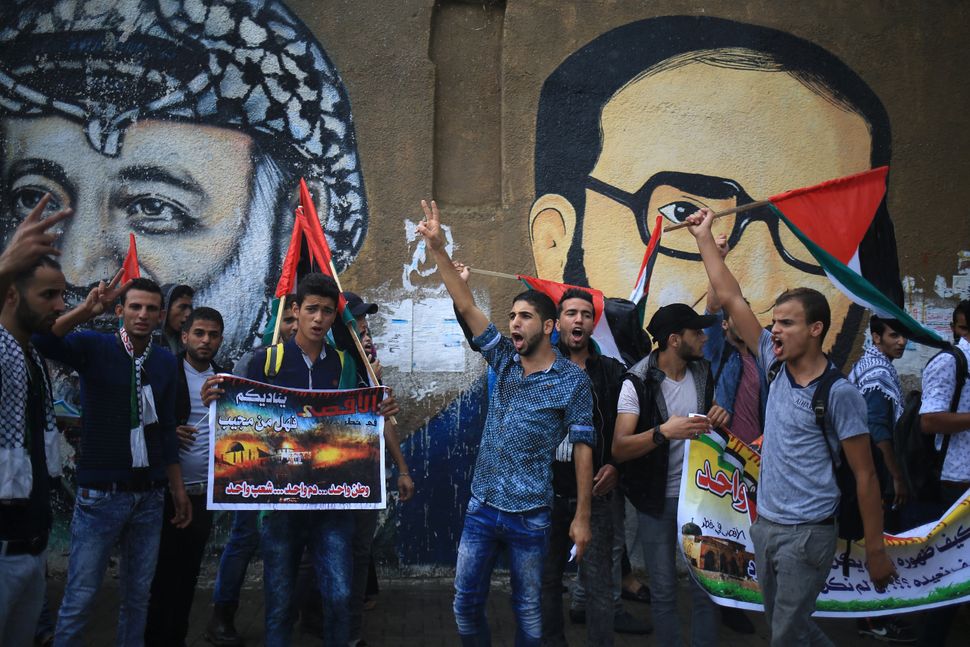 The violence that’s erupted in Jerusalem and the West Bank in the past few weeks hasn’t reached the level of a new intifada, Israeli officials are saying. And they’re right. There are indeed reasons why, with luck, it might not get that bad. But these days, good luck is in short supply in that part of the world.

Four Israelis were murdered in cold blood in the space of three days at the beginning of October. A fifth had been killed two weeks earlier when his car was pelted with stones. Four Palestinians were killed in the same period, two while carrying out stabbing attacks, two others by troops trying to quell Palestinian rioting. In mid-September, on the eve of Rosh Hashanah, the sporadic Palestinian roadside stone-throwing that had carried on since last fall turned into a steady stream of assaults, stonings, firebombs and clashes with troops throughout the West Bank and East Jerusalem. It’s not a full-scale uprising like the first intifada, in 1988 — not yet, anyway — but on both sides tempers are nearing the boiling point.

The ostensible reason for the violence is a widespread belief among Palestinians that Israel intends to change the status quo on Jerusalem’s Temple Mount and create a Jewish religious presence there, a desecration to many Muslims. The plateau is holy in both Judaism and Islam, but has been an exclusively Muslim-controlled sanctuary for centuries. Israel preserved Muslim control after capturing the Mount in 1967. Formal Jewish prayer is banned inside the compound.

Israel denies the charge that it’s out to change the rules, calling it slander and incitement to violence. But the growing popularity of a Temple Mount revivalist movement among Jewish religious nationalists, featuring ostentatious visits to the site by government ministers and Knesset members, has created intense suspicion and sporadic Palestinian violence. The latest round broke out September 13, the eve of the Jewish new year, when Muslim youths on the mount attacked Israeli police with rocks and pipe bombs, apparently protesting anticipated Jewish visits on the holy day. Violence spread from there to East Jerusalem, and then throughout the West Bank.

Israel’s prime minister, Benjamin Netanyahu, is caught between two opposing camps. On one side is his right-wing political base, led by West Bank Jewish settlers and the right flank of his own Likud party, pushing for an iron fist to crush the Palestinians. On the other side is a diverse constellation of interests pushing for caution and restraint. It includes the army, the international community — principally Washington and Europe — and the Palestinian Authority.

The settlers, living on the front line, are bearing the brunt of the stone-throwing and firebombs, and they’re furious. They’re grieving for the dead — four extremely popular personalities in the Orthodox community, as it happens. They suspect that Netanyahu and his defense minister, Moshe Yaalon, are soft on terrorism and are tying the army’s hands. Ten thousand rallied outside the prime minister’s official residence in Jerusalem on October 5, demanding a severe crackdown on West Bank Palestinians and their leaders in the P.A. Settler leaders are also calling for the establishment of new settlements, to show the Palestinians and the world that Israelis won’t be uprooted.

Anger at the P.A. spiked after the Fatah-armed wing, Al Aqsa Martyrs Brigade, claimed credit for the gruesome October 1 murders of Eitam and Naama Henkin in their car while their children looked on. The army later arrested five suspects who turned out to be members of Hamas, Fatah’s archrival, but that’s gotten little notice on the right.

It’s not just settlers and religious-nationalist Jewish Home politicians squeezing Netanyahu from the right. He’s pressured by young leaders of the Likud’s next generation, members of a tea-party type faction who openly oppose Palestinian statehood, sneer at world opinion and scoff at civil liberties. Three of their number, freshman Cabinet ministers, appeared at the October 5 demonstration against their boss. It was an ominous sign of the forces pushing Netanyahu toward what he views as an abyss.

The forces pushing for restraint have more diverse motives. Washington wants to avoid an explosion that could drive a new wedge between the West’s Israeli and Arab allies, complicating the fight against the Islamic State group. The P.A. wants to avoid a conflict that could radicalize the street and strengthen Hamas. It also wants to avoid seeing its domain reduced to rubble again, the way it was during the uprising in the early 2000s.

As for the army command, it wants to avoid heavy-handed measures that could turn a brushfire into an inferno. The generals say they have the tools they need to contain the violence, and they’d rather not be ordered to take measures they believe will escalate things. They’re also worried about the stability of the P.A., which still, for all its failings, provides important assistance in maintaining order and tracking down terrorists. Keeping a lid on the current unrest, letting it peter out rather than inflaming it, is seen as the key to avoiding a new intifada.

In fact, while the right speaks of a wave of terrorism, the military distinguishes between several types of attacks that differ fundamentally. As former military chief of staff Benny Gantz put it in a recent speech, there’s a difference between, on one hand, “stones and Molotov cocktails” and on the other hand, “heavy terrorism” involving firearms and explosives.

The first is typically perpetrated by so-called lone wolves, individuals acting on the spur of the moment. Its homemade weapons are less deadly than those of true terrorists, but it’s harder to prevent, precisely because there’s no organization to unravel. The second, “heavy terrorism,” is typically a planned operation carried out by organized terrorist cells under outside direction. It’s far more deadly, but also more vulnerable to intelligence and interdiction. The first is characteristic of Jerusalem, where terrorist organizations have no foothold. The second is characteristic of the West Bank, though the lone wolf attack is also found there. For jurisdictional as well as strategic reasons, the first is a police matter while the second is a military concern.

Netanyahu, caught between conflicting camps, is walking a tightrope. On one hand, he needs to nurture his political base. With his government holding a slender one-vote parliamentary majority, he can’t afford a single defection. On the other hand, he can’t afford actions that will further erode Israel’s already shaky international standing. Nor, for all his loathing of P.A. leader Mahmoud Abbas, does he have any desire to bring down the P.A. and become responsible for the daily care and feeding of 3 million Palestinians.

So far he’s tried to split the difference, easing the rules on opening fire, for example, but refusing to authorize a new settlement. It’s not pleasing anyone. He’s truly between a rock — well, make that a barrage of rocks — and a hard place.

It’s Not Quite a Third Intifada — Yet