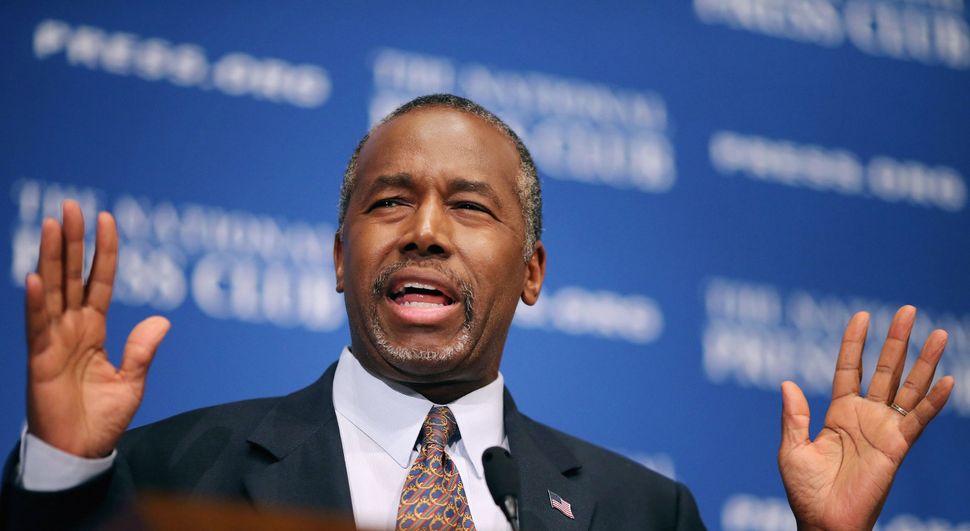 Many Jews, when they heard Ben Carson’s recent remark that if Jews had owned guns, the Holocaust wouldn’t have happened, probably said to themselves (to use the vernacular): “WTF?”

Those familiar with Carson’s long history of bizarre, ignorant and just plain weird pronouncements were likely less surprised, but have probably chalked it up to just another Weird Carson Moment. The only mystery, they probably mused, is why 20% of Republicans think this guy should be president.

But both are wrong. In fact, Carson’s outrageous and offensive claim is part of a long crescendo of pro-gun rhetoric that invokes Nazi Germany and the Holocaust. That theme, unlike Carson, is deeply rooted in the Republican Party and the National Rifle Association. And it is profoundly anti-Semitic, immoral and disgusting.

Here’s what Carson actually said: “The likelihood of Hitler being able to accomplish his goals would have been greatly diminished if the people had been armed,” he told CNN on Thursday. Today, he doubled down, explaining that “Basically, what I said is when tyranny occurs traditionally around the world, they try to disarm the people first.”

On first blush, this statement fails the rules of rational political discourse in three ways. First, and perhaps this goes without saying, it is ludicrously false. If Jews in Nazi Germany had owned guns, they would have been rounded up, sent to labor camps, gassed and burned by an authoritarian regime with many more guns, and with the support of at least half the general population.

Even if said Jews had today’s advanced armaments, the Nazis would surely have had more advanced ones, including tanks, an organized army, and a machinery of death unprecedented in human history. In the Warsaw Ghetto uprising, for example, armed Jews killed roughly two dozen Nazis. The Nazis, during the same uprising, killed 13,000 Jews.

This is why the Anti-Defamation League has long called such claims “historically inaccurate and offensive.”

Oh, and another thing, the Weimar Republic, which preceded Nazi Germany, actually had strict gun control laws. The Nazis relaxed them, for everyone except Jews. In other words, the Nazis sought to arm the populace in order to further their totalitarian, anti-semitic goals. Oops.

Second, Carson’s statement is so offensive as to beggar the imagination. Most of my great-grandparents, and many of my grandparents’ generation, died when the Nazis and their Ukrainian collaborators rounded up entire villages and massacred them in the forest. So, Dr. Carson, what killed them was gun control?

No, what killed them was anti-Semitism, bigotry, hatred and extreme nationalism — all of which, incidentally, are far more prevalent on the Right than on the left. In the ADL’s words, “Gun con­trol did not cause the Holo­caust; Nazism and anti-Semitism did.”

To suggest otherwise is to desecrate the memories of my relatives. And non-Jews should know better than to invoke them in the first place. For shame.

Third, Carson’s statement is a perfect example of Godwin’s Law, which posits that once Hitler and the Nazis have been invoked in conversation, the conversation is over. Which really is the point: pro-gun zealots have long been completely unhinged from reality. Obama’s coming to take our guns, they say. And, in Carson’s words, “there is a reason that these dictatorial people take the guns first,” implicitly linking President Obama with the Fuhrer.

But we err if we suppose that Carson’s statement is just a WTF moment, or another example of the surgeon-candidate acting like the dullest scalpel in the drawer. Because this is an old, deep, and broad theme among America’s right wing.

Carson is one of the more prominent people to have openly made this argument, but to gun nuts, it’s as familiar as the muzzle velocity of an AK-47.

Amazingly, according to historian Neal Knox, it appears that this crackpot theory originated with Jews — in particular, the firearms dealer turned gun rights activist Aaron Zelman, who founded the fringe group “Jews for the Preservation of Firearms Ownership” in 1989.

I remember getting the JPFO’s mailings back in the nineties. They resembled lunatic manifestoes, like the Unabomber’s or the one in the background of Dr. Bronner’s Soap packaging. And they made about as much sense.

But this particular idea has thrived. It deflects what gun extremism is really about — compensating for a sense of lost control or impotence, plus fear, racism and paranoia — into Tea Party style patriotism. Guns are to protect us from tyrants, not black men from the ghetto. We are defenders of liberty, not property. We’re not paranoid, we’re proud.

And by now, it’s everywhere in the Radical Right, complete with false quotations from Hitler praising gun control (he never said them), false constitutional theories (the second amendment has nothing to do with individual gun ownership), false histories and false implications for contemporary policy. The lie has grown so big that it’s begun to resemble the truth.

Inside the right-wing echo chamber, that is. What Carson’s statement really represents is — rather like his and Donald Trump’s entire candidacies — a sudden outing of the Right wing’s crazy aunt in the attic. In the case of Trump, the cray-cray is a weird xenophobia detached from all notions of economics, sociology or morality.

In the case of Carson, it’s what “everyone” knows to be true about Hitler, the Holocaust, and guns. Thanks to Carson, now the rest of us now know what “everyone” thinks. And we should be very, very afraid.

There is an imaginary Republican Party out there, that is fiscally conservative, strong on Israel and fundamentally reasonable. Likewise, there are actual gun owners out there, who may own a hunting rifle or two, or even a small handgun, but who agree that we ought to keep the psychologically disturbed from buying assault weapons as easily as they grab a case of beer.

But these groups are in the minority when it comes to the actual Republican Party, which is now (post-Kevin McCarthy in particular) increasingly ruled by the Fox News-is-too-liberal crowd. They, not a few smart Jewish Republicans inside the beltway, are what the modern G.O.P. is really all about. They are the ones enamored of Trump and Carson. And they all know that guns could have stopped the Holocaust.