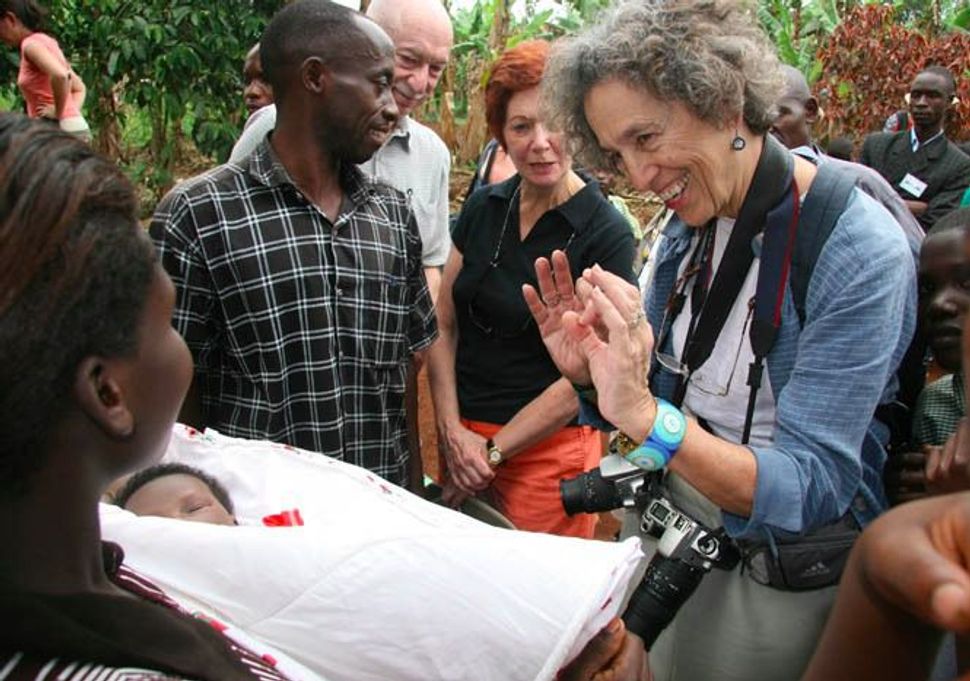 Ruth Messinger and I were sitting in synagogue talking, as is our custom (much to the dismay of the rabbi, my husband). She and I get a lot done in between praying on Shabbat mornings, and it isn’t all gossip. This was during the height of the crisis in Darfur. Ruth had brought American Jewish World Service to the point where it had serious capacity to bring greater awareness to the genocide and had begun to do what AJWS does so well: mobilize our community, wake us up to the terrible tragedies that, though not in our backyard, are nevertheless our responsibility.

She mentioned some preliminary plans to organize a march in Washington to galvanize support and urge our government to do more to stop the killing. Because the mission of JCC Manhattan, of which I am the executive director, includes being the community’s living room for the toughest issues, and will advocate where there is a community consensus (and here there certainly was), somewhere between the silent amida and the beginning of the Torah service, I agreed to mobilize New York.

Such is Ruth’s persuasive power. One hundred buses later, leaving from every synagogue, school, university, and the front of the JCC, we had managed to send close to 10,000 people — including almost 1,000 teens (with the help of UJA Federation and one extraordinary JCC staff member, Sarah Kay Lacks) to join 75,000 others to stand together as a Jewish community to say that never again really means never again.

To be Ruth’s friend and fellow traveler means to be constantly inspired and unnerved at the same time.

Walking into a rural village in Senegal to see a project AJWS supports to improve the health and education of women, we were greeted by thousands of men, women and children who were clearly there to see the Jewish Madonna of human rights work. The outpouring of love and gratitude for Ruth and the work she and her magnificent staff do to help these people live decent lives was quite an amazing thing to watch.

But then we went to sit down and watch the play they were mounting. It wasn’t a performance of tribal music. In front of all of us, including young children, they reenacted the death of a young girl from genital cutting, and the decision on the part of the village to end the practice.

Does Ruth sleep? That has been a question her friends have tried to fathom for many years. If you catch her on the subway, you know the answer. She is capable of five-minute naps that seem restorative. She has been known to fall asleep in the middle of the aforementioned rabbi’s sermon, only to arise in the discussion to ask a pointed question that belies the apparent nap. She is, in fact, tireless because she is constantly balancing her anger at the way the world works and her indomitable optimism at our ability to make things better.

She has made us better. For all of us — particularly women professionals — she has been a mentor and constant nudge. No one wears her dedication, enthusiasm or relentless commitments better than Ruth does, and no one shares all of that with more generosity than Ruth does. In an age where integrity in high places is all too rare, Ruth has been my hero, demonstrating through her own actions that it is possible to lead, to grow an organization in astonishing ways and to always bring freshly baked cookies to Shabbat dinner, while at the same time telling the truth, making hard choices and not cutting corners.

She has not only grown AJWS into an organization that serves as the Jewish community conduit for our highest aspirations, but has also brought it to a place of such strength that, in Robert Bank’s capable hands, it will continue to grow and flourish in new and important ways.

Such is Ruth’s legacy. And of course, she’s not going anywhere, even as her role changes. She will continue to inspire and unnerve us. May she — and we — go from strength to strength.

Rabbi Joy Levitt is the executive director of JCC Manhattan.