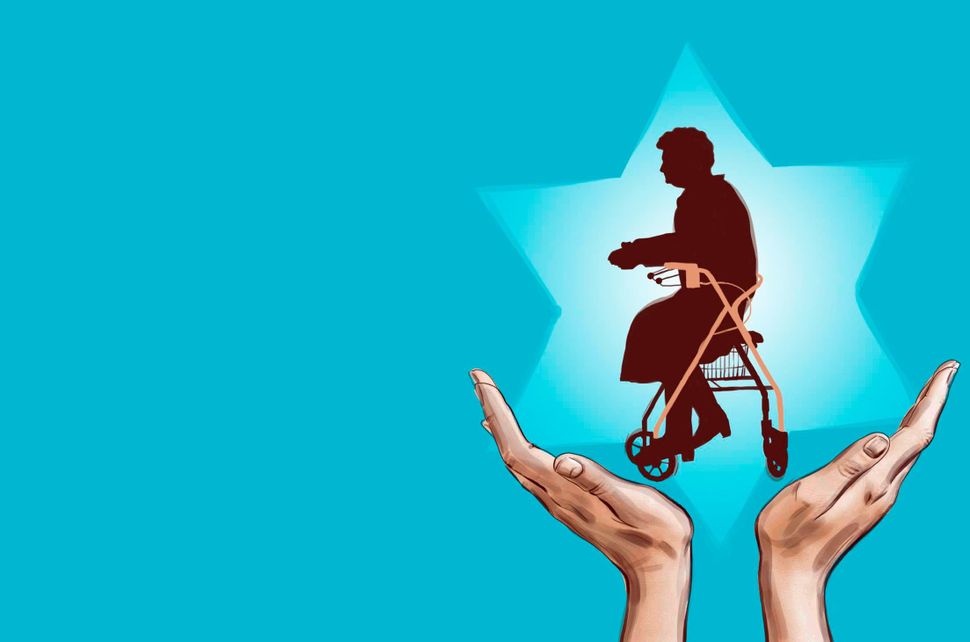 We live in a time when dying increasingly plays out in stages. More and more of those who fall seriously ill have, if not an exact schedule of life’s end, at least a realistic timeline.

So it was with a friend of mine who’d been diagnosed with an unusual type of brain tumor in her late 40s. Athletic and feisty, she fought back with surgery, chemotherapy and radiation. But within a few years, remission was followed by recurrence. As she weakened and the end loomed, none of us in her congregation expected to see her at services again.

Yet there she was, in the back of the room one Sabbath as the Torah reading began. Thin and frail, supported on either arm by two of her three teenage daughters, she walked slowly to the front for an aliyah. After the final blessing, she turned and addressed us directly. “It’s been a great ride,” she said.

We — her community — said nothing.

Our palpable yearning to reach out in return was stifled by an intuitive understanding that aching silence was preferable to awkward action: a shouted “Thank you” or “Yasher koach” or, worse, an all-American round of applause. But our silence did not mean that no response was the right response.

Today, many approach death still possessed of a sound mind, if not a sound body. Yet although we Jews have a ritual for almost everything, we have no way to ritually embrace someone who wants to reaffirm ties to the community and to God during the inevitable letting go of life.

The Torah describes a ritual for separating the sick from the community and then bringing them back in again. Though that era is long gone, those who are seriously ill in our society can suffer an informal separation that is just as acute. In a pamphlet titled “What You Can Do When a Friend (Like Me) Faces the End of Life,” a young St. Louis woman named Courtney Strain wrote that despite her illness she still needed friends and could be a friend in return. “Sit and pray with me. Don’t just pray for me,” wrote Strain, who died of brain cancer in 2010 at age 25. “Don’t abandon me at my most vulnerable time.”

Those words strikingly recall Psalm 71, excerpted in the High Holiday and festival liturgy: “Do not abandon me when I grow old; when my strength wanes do not leave me.” The prayer is addressed to God. But how can we as a community respond to that same plea?

To begin with, we should remember Ecclesiastes’s wisdom that for everyone there is “a time for being born and a time for dying.” In that vein, the Talmud tells of Rabbi Judah, whose death was agonizingly prolonged by the prayers of disciples unwilling to let him go. Seeing his suffering, his clever maidservant came up with the idea of throwing down an earthen jar in front of the disciples. Its shattering startled them into halting their prayers for a moment, allowing Rabbi Judah to die.

Our tradition also includes a prominent example of someone given advance knowledge of his death and then using his remaining time for one final connection with the community. Moses, after being told by God that he will not be allowed to enter Canaan, ends his days by delivering a series of sermons to the Israelites. While most of us wouldn’t pursue that exact path, the principle of connecting for closure remains.

How, then, do we pray “with” someone soon to die? There are few “call and response” moments in Jewish ritual, where one congregant’s words prompt a direct response from others. Two exceptions, interestingly, both involve death.

The first is the Kaddish when recited by a mourner. The congregational response after the first section is the same as when it is recited at other times. The other example is Birkat Ha’gomel, recited by an individual after an aliyah. Here, the response specifically wishes God’s continued blessings on the person giving thanks for deliverance from danger. One category of danger is recovery from a very serious illness.

But suppose that, like Rabbi Judah, an individual has accepted that there will be no recovery. The structure of Birkat Ha’gomel suggests an alternative prayer. The person nearing the end of life could, after an aliyah, simply thank God for life. Doing so in a public setting would implicitly reinforce the importance of community. The Hebrew would be brief: “Baruch atah Adonai, asher natan li chayim.” (“Blessed are you, God, who has given me life.”)

We Jews are rich in blessings for the “comings” — entering into marriage, the birth of a child. The goings are more problematic. The suggestion above is intended to start a discussion; others may have better ideas. The need, though, is real, and for those who cherish their connection to Jewish community, it is intensely felt. May we bring comfort to those who are soon to die — and to ourselves — with words that offer a vision of final rest and peace.

Michael L. Millenson is a writer based in Highland Park, Ill.