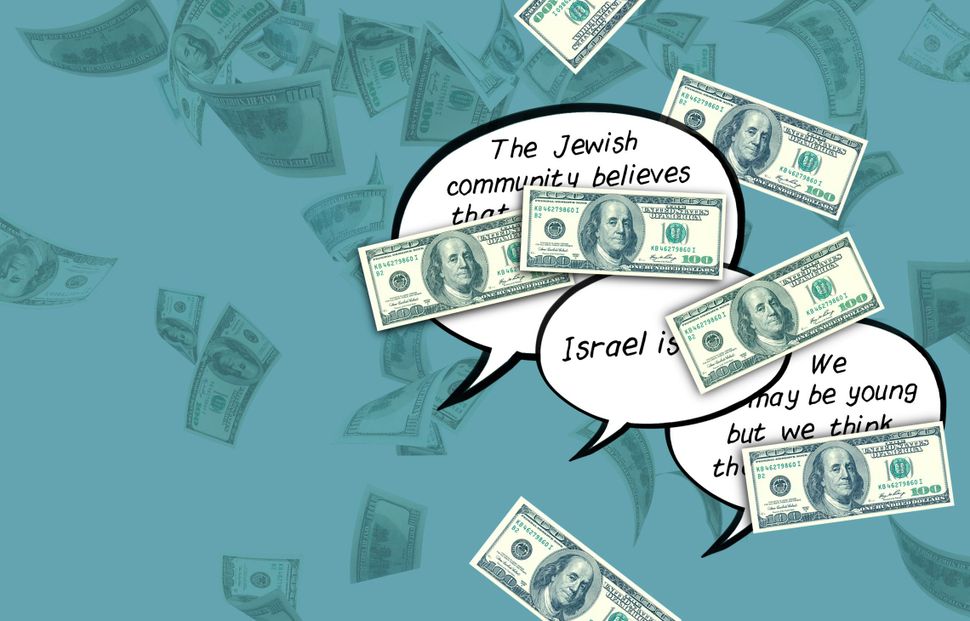 I don’t presume to know all the positive attributes that define true leadership in our age, but I can confidently tell you what does not, by itself, constitute a good Jewish leader: money.

Financial capacity to donate to an organization or a cause is not the same as leadership — and yet, all too frequently, Jewish organizations treat their funders as leaders. As a result, they end up with a lack of authentic visionaries.

It’s not hard to see why such a “leadership” culture has emerged in the Jewish community. Every organization is looking to expand funding in a fickle marketplace. In order to raise dollars, organizations identify the wealthiest people in the community, recruit them and cultivate their giving over time.

Not content just to give money to a good cause, many donors demand an outsized role in decision making, and organizations that want to keep them happy comply, fawningly.

Even when donors do not initially demand a leadership role, organizations often seek to empower them because they know they are more likely to clinch the donors’ gifts, turn them into loyal supporters and raise more funds from their friends. In effect, Jewish organizations have developed a wealthy cheerleader system that is optimally designed for raising money but not necessarily for accomplishing their mission.

It’s understandable that wealthy people have a voice — even a disproportionate voice — in organizational life. The problem arises when that voice drowns out everyone else’s, completely obscuring the democratic ethos of Jewish civic life.

This dynamic undoubtedly exists in secular philanthropic circles as well, but it is decidedly more pronounced in the Jewish community. My experience is that in secular philanthropy there is often a much brighter line between giving and leadership. There is frequently an active group of donors who finance the organization’s work, and a set of leaders who provide vision, direction and insight. Sometimes there is overlap and sometimes there isn’t.

So the conflation of leadership with fundraising is not inevitable. What’s more, this perverse concept of leadership hurts the Jewish community in several ways.

First, it hands the keys to people who may have little leadership ability or insight, at least in the sphere of Jewish organizational life. Being a good businessperson does not necessarily make you an effective lay leader.

Second, it blinds organizations to highly talented people in our community who may possess tremendous leadership qualities but not deep pockets. With the need to raise more money, many organizations fill all the seats with big donors and overlook genuinely capable leaders.

Third, it makes us look like an elitist community catering to the few, and pushes away younger Jews who don’t find a donor-dominated establishment the least bit appealing.

This confusion about leadership can produce abysmal results. Time and again, ideologically driven funders demand that their organizations shun left-of-center voices on Israel that criticize Israeli government policy. Numerous synagogues have invited and then disinvited speakers, such as Peter Beinart, simply because a small group or even a single donor has threatened to cut off financial support. These funders do a disservice to the organizations they support, which end up alienating younger Jews and appearing closed-minded and weak. In the end, the funders unwittingly strengthen the very groups and voices they try to weaken.

While it may not be easy, it is possible to say no to these donors. The leadership of the Jewish Federation of Greater Washington, for example, publicly declared that they would not give in to the pressure of outside agitators demanding that the federation defund a local Jewish community center for showing a controversial play about Israel. In an open letter to the community, federation leaders stated, “It is our job to live up to the ideals of Abraham, to create an open tent for all Jews, to demonstrate our love of Israel and the Jewish people everywhere.” That’s rare, but true, leadership.

At other moments, I’ve been struck at how weak-kneed Jewish philanthropists have been in the face of serious challenges. When Israel’s religious affairs minister, David Azoulay, declared that he “cannot allow” himself to say that a Reform Jew is a Jew, there was hardly a peep from anyone but the leaders of the denominations. Where were all the voices of courage, I wondered, to challenge this obvious affront to the interests of the American Jewish community, not to mention Israeli society?

Would it be too much to expect Orthodox Jewish philanthropists or organizational leaders who otherwise dedicate themselves to advancing bilateral ties to speak out against the attack on Reform Judaism?

By handing power to people with money irrespective of their leadership capacity or insight, we are cheating our community of what we all deserve. We can do better.