Why Is Chabad Helping Christian Extremists? 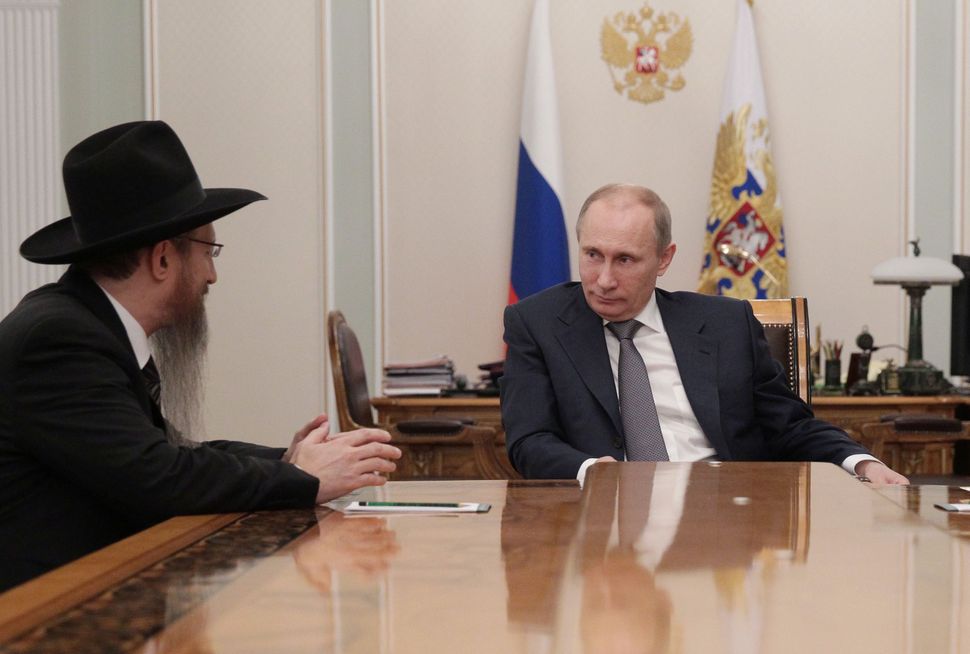 As readers of this column know, I have long praised Chabad Lubavitch’s spirituality, its outreach tactics and its mystical roots.

But over the past several years, Chabad leaders have begun propping up far-right Christian extremists — not mere cultural conservatives, or right-wing politicians, but the extreme fringe that opposes human rights and, in some cases, the foundations of secular democracy itself.

On October 27, for example, an event called the World Congress of Families will be taking place in Salt Lake City. Funded by right-wing extremists who make Mike Huckabee look like Rabbi Arthur Waskow, the WCF is an international network of far-right Christians who seek to enshrine their ultra-conservative views in secular law.

Indeed, some of them — Christian Reconstructionists, Dominionists and others — seek to do away with the secular law altogether, one day replacing the United States as we know it with an explicitly Christian nation.

Even those with less outlandish views have already done severe harm to women and lesbian, gay, bisexual and transgender people around the world. For example, Alexey Komov and Yelena Mizulina, two WCF leaders, are the primary authors of Russia’s anti-gay law, which makes the sharing of this column a criminal offense in that country. Larry Jacobs, WCF’s managing director, called that law “a great idea” and has helped seed copycat laws elsewhere in Eastern Europe.

WCF is also the international leader in restricting women’s access to family planning, including not just abortion but contraception as well — and even education. WCF’s co-founder, Allan Carlson, has promoted a concept called the “natural family,” with a male breadwinner, a female mother and kids. That leaves no place for women who wish to pursue careers or postpone childrearing.

These are not idle philosophies. At the United Nations, WCF has succeeded in limiting U.N. pro-family funding to such “natural families.” Here in the United States, the first day of next week’s conference is devoted entirely to pro-life/anti-choice work, and includes a session titled “Pro-Life: How We Are Winning.”

These are the same people who have sought to return Bible study (Old and New Testament) to public schools and to teach intelligent design instead of science. They are the same people who place crosses on public land across the country. Despite their love of Israel’s far-right wing, they are hostile to the First Amendment freedoms that have allowed Judaism to flourish here in America. They believe that the separation of church and state is a liberal fiction. They are Christian supremacists.

Who will be at the conference? Between 25 and 40 partner organizations with a combined annual budget of more than $200 million. Some groups are familiar: Alliance Defending Freedom, the Family Research Council, Focus on the Family and Americans United for Life. Others are less familiar, such as Sharon Slater’s Family Watch International and several Russian organizations tied to the Russian Orthodox Church.

The co-director of Chabad Lubavitch of Utah, Rabbi Avremi Zippel, will be providing the invocation for the event that Tuesday morning. He will later be speaking on the subject of “The Family: Consistent Across Faith Perspectives.”

Presumably, Zippel will not be including the biblical family model in his remarks, which includes polygamy, concubinage and the forced enslavement of the wives of defeated enemies. More likely, he will cherry-pick from Jewish sources in order to synchronize them with his far-right colleagues.

What Zippel is really doing, however, is providing a Jewish fig leaf to cover the overwhelmingly Christian nature of WCF. To American Jews, it is obvious that the Chabad sect — at most 5% of the American Jewish population — does not represent us. Even Orthodox rabbis can plausibly speak for only 20% of American Jews at most. But to outsiders, having a beard-and-hatted rabbi bless WCF gives a Jewish imprimatur to the event. They do not know how few Jews he truly represents.

This is not the first time that Chabad has played the role of Jewish Uncle Tom for these specific Christian extremists. In Russia, leading Chabad rabbis are close associates of Vladimir Putin and were present at the signing of the so-called “anti-propaganda law” that has led to widespread increases in violence, as well as to the criminal prosecution of human rights organizations.

Indeed, the Putin connection is not mere coincidence. WCF was co-founded by Carlson and two Russian arch-conservatives, and last year’s conference was scheduled for Moscow, before Russia’s invasion of Ukraine made it appear unseemly. Its Russian funders include the oligarchs Konstantin Malofeev and Vladimir Yakunin, both in Putin’s inner circle. And as noted above, WCF leaders conceived and promoted the Anti-Propaganda Law.

Yes, at a time in which the United States finds itself squaring off against Putin’s Russia in the Ukraine, Syria and elsewhere around the world, American extremists are finding common cause with their Russian counterparts in the Putin regime. And that includes Chabad.

Why is Chabad’s leadership cozying up to extremists and theocrats?

To be sure, there are some ideological affinities. For decades, Orthodox and ultra-Orthodox Jews have supported the Christian Right’s efforts to enshrine religious principles in civil law, increase funding to religious institutions (especially their own) and exempt religious entities from civil rights laws.

But WCF goes beyond those efforts. Building a Russian-African-Islamic bloc at the U.N. to oppose any family planning efforts, for example, is quite different from lighting a menorah at City Hall. So are racist theories that Russia and the United States are facing a “demographic winter” because of the influx of brown babies and the decrease in white ones.

Perhaps Chabad’s leaders do not know of the extent of WCF’s extremism. And yet, everyone in Russia knows what’s in store for the gay and lesbian community. Chabad leaders can’t stand next to President Putin and the Orthodox patriarchs and pretend that they are favoring only benign conservative policies. Nor can they read through next week’s WCF program and fail to notice its overwhelmingly conservative-evangelical, hard-right orientation.

Some have suggested more earthly motivations. Cozying up to Putin has given Chabad influence in Russia that is unparalleled anywhere else in the world. That influence comes with power (especially over Russia’s Jewish community), prestige and money. And since Putin’s inner circle helped found the World Congress of Families, the network is Putin is power is cash.

Likewise, in the United States, faith-based initiatives and other erosions in the wall between church and state have yielded short-term bonanzas for Orthodox and ultra-Orthodox institutions. Some, as this newspaper has reported, are outright scams, siphoning taxpayer dollars to nonexistent schools and academies. Others are perfectly legal.

But however tasty the right-wing porridge may be, it comes at the expense of American Jewry’s birthright: a democratic country in which religious dogma is not imposed as law. That birthright has enabled our community to survive, grow and flourish. It is a chillul hashem, a desecration of God’s name, for Chabad to help those who would destroy it.

Why Is Chabad Helping Christian Extremists?