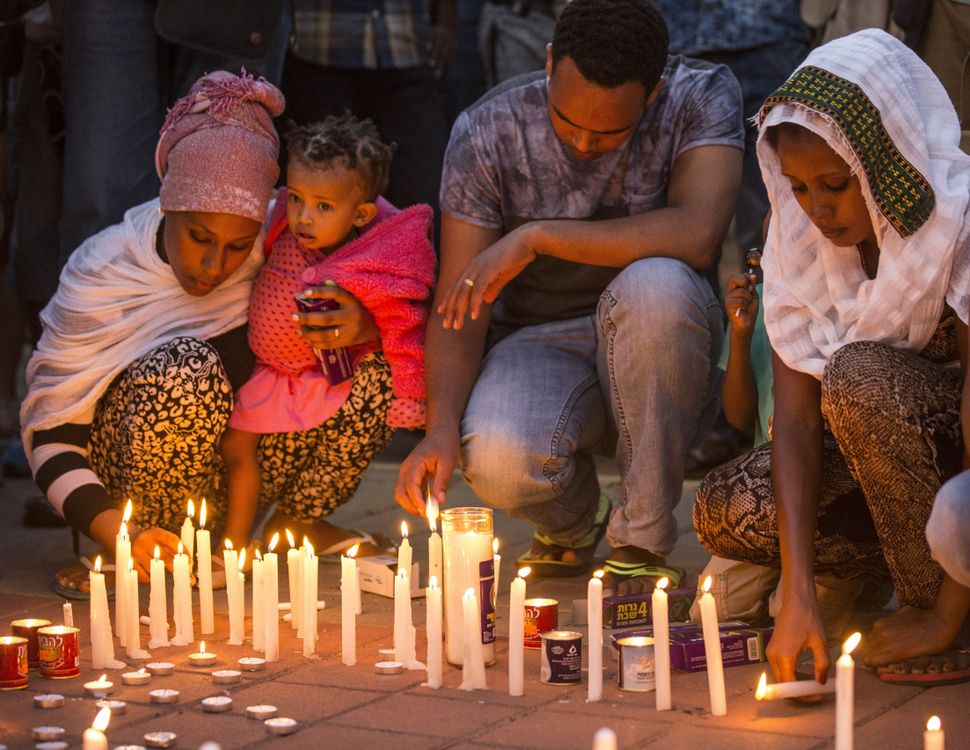 Members of the Eritrean community light candles in Tel Aviv to commemorate the killing of Habtom Zarhum. Image by Getty Images

I survived a terror attack.

The words roll off my tongue. I. Survived. A terror attack.

People are telling me that what happened to me was a miracle. I’m supposed to feel relief for surviving, for coming out of it in one piece, unharmed. I’m flooded with many feelings, but relief isn’t one. I am overcome by anger, fear, concern, tremendous sadness and overwhelming shame.

I survived this experience only to find that in order to save innocent lives, you can kill innocents. It’s an equation that the only lacking element is conscience.

I witnessed the terror attack on October 18 only through sound. All I could do was to try to imagine what was happening based on the sound of weapons going off and the screaming we heard from our hiding-place. I never imagined that the fear I felt at the time of the attack, would be so minimized by the fear that I felt just a few hours later, after I discovered just what had happened there.

I arrived at the Central Bus Station in Beersheva that day after giving a lecture to university students about social activism. I told them about the organization I have been leading since 2009: “Students for Refugees.” We work with African asylum seekers in Israel’s Southern region. I shared that when we first started out we thought it would be a temporary, short-term initiative. How wrong we were.

It has been a long and hard journey, in which we learned to work “with” and not “for” the community. Our shared struggle has only become more difficult over the years.

As the Israeli government’s policy toward this group increasingly worsens, our work increases as well. A policy of “non-policy” toward asylum seekers from Sudan and Eritrea has emerged: the government ignores individual requests for refugee status, avoids granting legal status, renewing visas or providing social rights. These policies coincide with a symphony of abuse, persecution and incitement; detention and deportation; dehumanization and xenophobia; conducted by elected representatives.

I spoke with the students about the power of individuals in creating and leading change, about the ability to create a new discourse and think critically. We discussed the absurd and disgraceful treatment of refugees by the state, and how it harms Israeli residents in many ways as well. We talked about other ways; alternatives of dignified solutions; about compassion and humanity. I left the lecture feeling empowered and positive. I arrived at the Central Bus Station smiling and contemplating this feeling of hopeful optimism.

I entered one of the stores at the station and took my time to browse. When the first shot was fired, we still didn’t understand what was going on. A split second later, a booming round of shots rang through. The storekeeper and customers rushed to hide behind a counter.

We were squeezed together, four women and a girl. We heard screaming and commotion, a weapon being loaded and another round of shots. A terrible echo and blinding fear. By the number of shots fired I was sure there was a team of armed terrorists and feared we would soon be found. I whispered to the girl quivering beside me that we are in a safe place, and being guarded. That all the noises actually meant that they were beating the bad guys, and protecting us.

That was really what I believed.

I left the station with shaky legs and sobbing. Struggling to process what had just happened. The sounds of shots still ringing in my ears. Surrounded by sirens of police and medical teams. Policemen rushing over, soldiers, and a curious mass. I sat at the edge of the sidewalk trying to fill my lungs with air, struggling with the pressure in my chest. I arrived home and opened news sites, trying to understand what happened, to no avail. The hours passed and reports changed constantly. In the middle of the night when security tapes were broadcast, the silence of the night was pierced by the screams in my heart.

There were two attacks in the Central Bus Station of Beersheva that day.

A soldier in uniform, young man, Omri Levi, was stabbed to death. Murdered by a terrorist.

An Eritrean, asylum seeker, young man, Habtom Zarhum, was shot and beaten to death. Murdered by an angry, hateful mob.

Such a deep pain and sorrow comes with mourning this loss, the unnecessary death of two human beings. This pain and sorrow are joined by horror and fear, given the response throughout Israel to the violence inflicted on Zarhum.

He was shot because he was suspected as an accomplice to the terrorist, though he was merely afraid and trying to flee for his life like everyone else. As he fell to the ground, people started hitting him. Lying in his own blood, Zarhum was kicked all over his body, a bench was picked up and thrown onto him, again and again. Finally, when all was done, they even spat on his body.

I wonder; I think back the fear I felt behind the counter, with other women who speak my language, comforting each other.

What did he feel?

An Eritrean man, in a country that abuses him, that makes his life unbearable, tortures his spirit, and for years renders his humanity dispensable.

What does it feel like to lay on a cold floor, bleeding, alone, with no words, no language, no protections?

Which feeling overwhelms you first, pain or fear?

Do you feel at all, or does the soul exit the body even before it shuts down?

How does it feel to run for refuge again and again, but this time find death.

That elected officials have no consensus in condemning this attack is appalling. The fact that public representatives stand behind the killers, justifying their action because of the “need of the hour,” is threatening not only to asylum seekers, but also to any citizen or resident of Israel who wants to live in a safe and secure place. The brutality of these acts should shake up anyone and everyone.

The dehumanization of African asylum seekers in Israeli public discourse has been on-going for years. It is apparent in the blunt statements made by politicians like MK Miri Regev, Israel’s current minister of culture, who stated, “the Sudanese are like a cancer in our body.” It is backed up by countless practices carried out daily by state agents that make these humans’ lives increasingly difficult.

The Ministry of Defense declared that Zarhum will not be officially recognized as a victim of a terrorist attack, given his illegal entry to the country and categorization as an “infiltrator.” The men who killed him were released to their homes last week.

I ask you for your forgiveness, Habtom Zarhum, that both in your life and death Israel did not recognize your status.

Rest in Peace, no visa is required to stay in heaven.

Moran Mekamel has an MA in social work. She is an activist and the head of “Students for Refugees”.