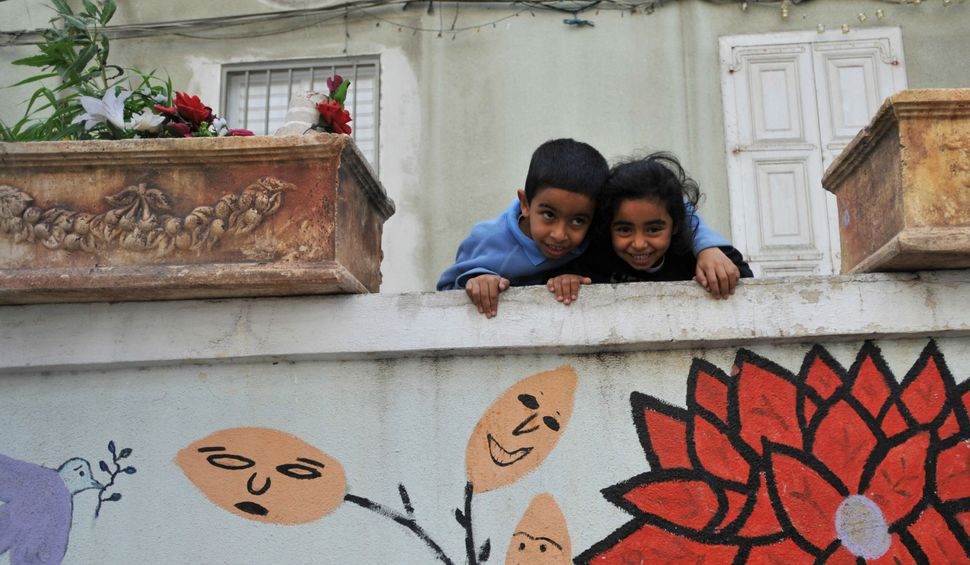 Not far from where I write, in my rented apartment in Yaffo, a bus was stoned last week. The driver said he was on his route in the evening when he saw a group of masked young men waving Hamas flags. And then the windows were shattered. But there were no injuries. Mainstream Israeli media described what-did-not-happen as a pogrom.

The atmosphere in Israel is extremely violent — perhaps more than it has ever been. Israelis seem unable to understand where these people have come from, who start chasing us down the streets with knives. Now there’s talk of curfew, of closure, of bombings. As if that could possibly stop desperate people who have nothing to lose. No one talks about peace anymore, or about the occupied territories, or the standstill in the political process. Almost 20 years have passed since Yitzhak Rabin was assassinated, and it’s become just another anniversary.

My colleagues from the younger generation — writers and poets in their early twenties — have known practically no regime except that of the all-powerful Benjamin Netanyahu. Some of them identify, almost reflexively, with the right-wing: Others are considering ways to leave Israel. Where to? Berlin, New York, London. 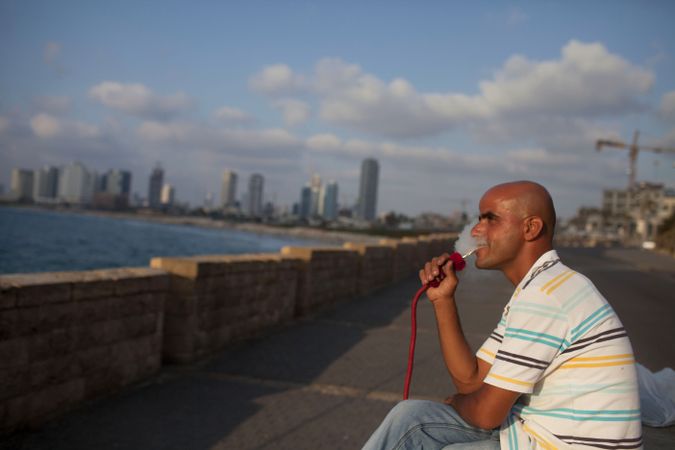 Arab Israeli smokes a hookah on the waterfront in the mixed neighborhood of Yaffo. Image by Getty Images

Like the title of Charles Baudelaire’s prose poem, they want to be “Anywhere out of the world.”

Still, there is coexistence in Yaffo. The city was founded thousands of years ago, and is known by Arabs as Arous al-Bahr — “bride of the sea.” In the early 20th century, both Jews and Arabs lived here, with an Arab majority. But in the beginning of 1948, even before the war broke out, Yaffo collapsed. The wealthy residents left first, then the community leaders. They fled to Lebanon, to Syria, to places where people find refuge. After Yaffo’s surrender, it was occupied by Israel, and the Arab majority was soon overtaken by a Jewish one. Today, Yaffo is part of the Tel Aviv municipality.

Coexistence between Jews and Arabs in Yaffo is mostly evident in the fact that people simply live together, or rather, alongside each other — neither by the knife, nor by the olive leaf. Their lives are led in parallel, with frequent intersections. Jews come here to eat hummus. Soldiers on furlough, come here too. The Arabs greet them politely, although in some places they are bolder, wearing T-shirts with a slogan in Hebrew and Arabic: “Jews and Arabs refuse to be enemies.” There is even a straight-friendly bar where young men of both nationalities dance together. Strangers who happen upon this place might rub their eyes in disbelief. The young Palestinians feel close to their Jewish peers, yet at the same time light years away from them. They cultivate nationalist sensibilities, but make love with members of both nationalities. Their parents and siblings often maintain remarkably middleclass lifestyles, with regular jobs, houses, cars.

Land in Yaffo is worth a fortune. Seasoned developers buy it and sell it and build high-rises on it. Organic markets flourish, but the neighborhoods are still dotted with old-time Jewish Bulgarian restaurants, as well as Arab humus eateries. On the beach in Ajami, Arabs sit smoking hookahs and staring out at the sea, well into the night. Time seems to stand still here, and to these old men, so does the occupation. It’s the slow pace of the East, of the Levant. Skyscrapers tower above Yaffo’s over-achieving sister, Tel Aviv. That’s where business is conducted, and not just in real estate. Everyone thinks it’s the city that never stops, but they’re wrong: in cities that really never stop — like Cairo, São Paulo, or Istanbul — you can always find a lull within the turmoil.

My family came to Tel Aviv from Cairo and Damascus. They left behind full, beautiful lives and came here penniless but proud. They did not build this country. They did not fight, or kill, and they received no medals of honor. They were not strategists. They spent their lives sitting at home, waiting. My grandfather, also Moshe Sakal, was a native son of Damascus, where he wrote prose in Arabic. His best friend in Israel was an Arab from Yaffo. When he came here, in 1949, my grandfather stopped writing. The Hebrew language did him in. I write prose in Hebrew, but on days like these it’s hard to lift the pen. Not long ago, in those lost days of Oslo, there was widespread faith in the ability of writers and intellectuals to bring about profound changes in society. I am sorry to say that, at this point in our relationship, we are unable to deliver the goods. And that holds true for both Palestinian and Israeli peace-lovers. Amos Oz, David Grossman, A.B. Yehoshua and the rest of the old-guard of Israeli literature epitomized the enlightened Israeli intellectual, believing that dialogue between sane people on both sides would bear fruit. But for my generation, those gestures seem insufficient to effect real change.

Now I sit at home in Yaffo. Around the country people repay each other with knives. On Facebook they brandish even sharper, more violent weapons. But I am trying to write a story about a different space, about a time when the Middle East was steeped not only in blood but in love. That was before they built high walls between states the way a surgeon does reconstructive surgery — gently but decisively. I only hope there will be someone left to tell the story to.

Moshe Sakal is the author of five books and the recipient of a Fulbright grant to study at the International Writing Program at the Univeristy of Iowa. His essays have appeared in Ha’aretz, Le Monde and elsewhere.