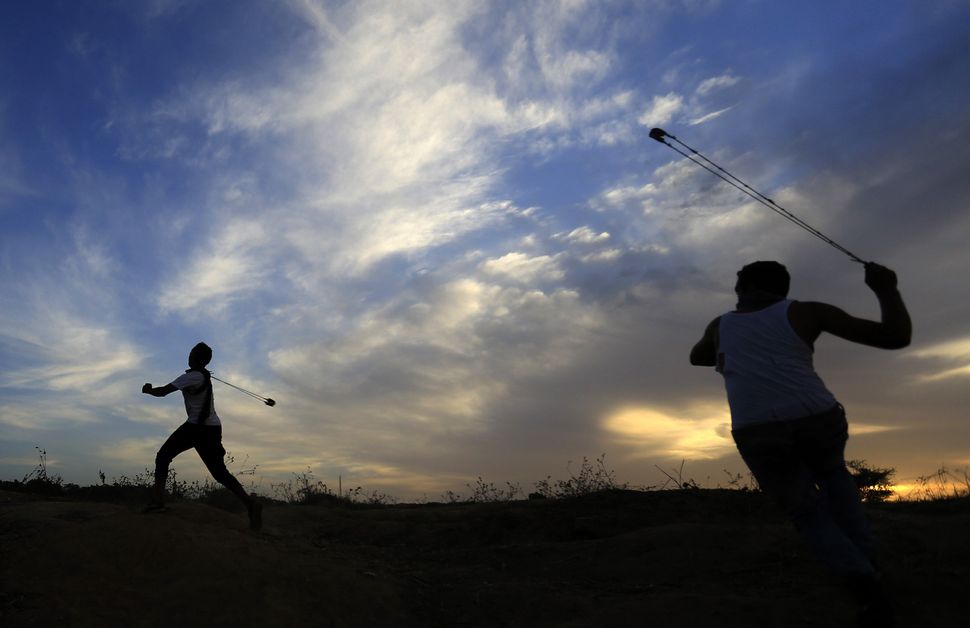 Benjamin Netanyahu probably thinks he got the last laugh after the international uproar he touched off with his “Hitler didn’t want to exterminate the Jews” speech on October 20. But he just might have opened up a whole new can of worms.

The Israeli prime minister was bombarded with criticism by everyone from Knesset opposition leader Isaac Herzog to German Chancellor Angela Merkel over his claim that the extermination idea was first proposed to Hitler by the Palestinian leader Haj Amin al-Husseini, the grand mufti of Jerusalem. The critics all said it was a historical untruth, a distortion of the Holocaust and a diminishment of the evil of Nazism. Merkel went as far as to rebuke Netanyahu and insist that Germans, not someone else, bore responsibility for the Holocaust.

Netanyahu, it turned out, was quick to concede the main point. He never meant to suggest that Hitler wasn’t responsible for the Holocaust, he said the next day. A week later he conceded further that the genocide idea hadn’t come from the mufti. He said he merely wanted to point out that Husseini, a founding father of Palestinian nationalism, was an enthusiastic accomplice of Hitler’s and that genocidal, Nazi-style anti-Semitism was the primary motivating force in his opposition to Zionism. And that today’s Palestinian leadership continues to revere Husseini and his legacy.

And with that, the subject was more or less closed. Critics around the world, it seems, were satisfied that Netanyahu understood the magnitude of Hitler’s crime. All he was really trying to say was that Palestinian nationalism traces its roots to genocidal anti-Semitism. And to world opinion such an imputation apparently isn’t a problem. So Netanyahu came out a winner from the seeming embarrassment. He discredited the current Palestinian leadership under Mahmoud Abbas as being politically descended from those who admired genocide. A good day’s work.

Coincidentally or not, however, voices have been raised in a most unlikely corner to insist that Palestinian hostility to Israel — including Palestinian terrorist violence — is at least partly a response to Israeli actions and policies, and not simply a deep-seated hatred of Jews. That corner is the Israel Defense Forces.

In the days after Netanyahu’s speech, two active-duty IDF generals who are among the army’s top experts on Palestinian affairs spoke out publicly to state that Palestinian violence is driven to a considerable degree by anger at Israeli actions. One of the two went a step further, warning that only a serious Israeli diplomatic re-engagement with the Palestinians will help to quell such violence over the long term.

This might seem like more of the same-old, same-old that we’ve been hearing for several years now: questioning of Netanyahu’s policies by senior figures in the Israeli defense establishment. But it’s not. This is something new.

Up to now, almost all public pushback from the security community has come from retired ex-service chiefs who are now private citizens and free to speak their minds. Their unanimity may well tell us something important about Israeli defense doctrine, as I’ve argued before. And indeed, many of them remain in close touch and intimately involved as reservists in current military and intelligence activity.

But there’s a difference when active-duty generals speak out. IDF generals — unlike, say, Israeli cabinet ministers — are not free to spout off publicly with opinions that contradict their immediate bosses. When they do speak out, therefore, their views can be assumed to reflect those of the IDF command. Accordingly, for a high-ranking, active-duty general to voice a view that’s at odds with strongly held views of the prime minister is nothing less than shocking, because it’s the voice of the IDF. And that’s what has started happening now.

The first general to speak out was Major General Nitzan Alon, currently chief of the General Staff Operations Directorate. He moved up last May after nearly a decade as commander of Israel’s military presence in the West Bank — first as commander of the Judea-Samaria Division, then as chief of Central Command. Alon testified on October 22 in a trial involving two settlers accused of incitement for publishing the Kahanist-leaning Jewish Voice website.

“Some of the motivation of the Palestinians to carry out terror attacks is due to the violence of right-wing elements in the West Bank,” Alon told the court, according to Haaretz and numerous other news sources.

“In my understanding there are many reasons for Palestinian violence, some of them related to the murderous behavior of the terrorists, some related to religious and nationalistic motives, and a certain part, not the main part, that is related to revenge activity due to the activity of Israelis against Palestinians,” Alon was quoted as saying.

He also said that “a significant part of Israeli violence against Palestinians stems from Palestinian violence against Israelis. Some of the incidents are revenge for terror or violence.” In other words, we are witnessing what’s known in the West — much to the displeasure of the Israeli and pro-Israel right — as a cycle of violence.

The second general to cause waves was Brigadier General Guy Goldstein, deputy chief of the Coordinator of Government Activities in the Territories. That’s the IDF unit in charge of maintaining relations between the military, as legal sovereign in the territories (under Israeli law, the territories aren’t annexed to Israel but rather are held by the army), and Palestinian civil authorities.

Speaking October 28 at an academic conference in Netanya on rehabilitation of Gaza, Goldstein said that the wave of Palestinian terrorist violence plaguing Israel would not disappear — though it might rise and fall in intensity — “unless there is some significant change, partly if not mostly on the diplomatic front.”

“What Israel is facing is not a wave of escalation,” Goldstein was quoted as saying. “but a confrontation that is expected to continue if not intensify and bring changes in the Palestinian arena. Even if there’s a certain calming in terrorism and disturbances, without a diplomatic process all the conditions for a continuation of the confrontation will remain and are expected to erupt again. The central challenge: the ability of the Palestinian Authority to control the confrontation. Over time the risk grows that it will lose control and stability will be undermined.”

Of the two generals’ comments, Goldstein’s caused the greater public uproar. As deputy chief of the Coordinator’s office, he can only say what his bosses say — his immediate superior, chief coordinator Major General Yoav “Paulie” Mordechai, and above him the chief of staff, Lieutenant General Gadi Eizenkot.

What Goldstein did was to give the public a rare peek at what the military and intelligence chiefs are telling the prime minister and the cabinet in closed sessions. Now we know exactly what the Netanyahu government is hearing from the people whom it pays to read and understand the events on the ground. Hearing — yet ignoring.

Rephrased in plain English (the comments above are my translation from Goldstein’s Hebrew), Goldstein is saying that force alone, the government’s current response to the unrest, will not bring calm. And by implication, that there are diplomatic options — viable options from the standpoint of Israeli security as the army reads it — that the government is choosing not to pursue.

But while Goldstein’s comments are more sweeping, Nitzan Alon’s may be more telling, if only because they signal the return one of the IDF’s fastest rising stars to the public eye for a moment. During his long tenure as the IDF’s chief face to the West Bank, he was enormously unpopular among the settlers. He was considered a leftist, hostile to the settlers, overly sympathetic to Palestinian rights. They grumbled, correctly, that his wife, Mor Nitzan, was active in the left-wing women’s peace group Machsom Watch. Settler activists occasionally held protest demonstrations outside his home.

When he was promoted from commander of the Judea-Samaria Division to chief of Central Command in December 2011 by then-chief of staff Benny Gantz, it evoked howls of protest. Commentators on the Israeli right viewed it, again correctly, as something of a declaration of independence, if not downright defiance, by Gantz, who had become chief of staff the previous February.

Gantz had been a compromise appointee, chosen after the army’s recommendation for chief of staff, Gadi Eizenkot, was vetoed by Netanyahu and then-defense minister Ehud Barak, and their own favorite was then disqualified over a minor real estate scandal. In appointing Alon, Gantz was laying down an early marker that he was part of the IDF consensus.

Last February Eizenkot, now 55, became chief of staff. In May he appointed Alon, 50, to be chief of operations, one of the top positions at General Staff headquarters. Alon is one of several young up-and-comers being groomed for the top spot in the next round or two. The other top name being talked about is Aviv Kochavi, 51, currently chief of Northern Command and previously chief of military intelligence — and chief of operations before that. What they all share is a reading of Israel’s security situation that’s at odds with the Likud consensus.

That reading starts with the knowledge, which they experience daily and share with the government, that cooperation between the IDF and the Palestinian security services under Mahmoud Abbas’s command continues unabated. And that Abbas is doing his best to calm the current unrest. They know from their daily contact with their Palestinian counterparts that the steady diet of insults hurled at Abbas by Israel’s political leaders — from accusations of incitement to implications of Nazism — weakens him and makes their job harder.

They know that the Palestinian security services, from the leadership on down, cooperate with Israeli security in the hope and expectation that it will lead to Palestinian independence. And that removal of that hope — as Netanyahu seemed to do when he told a Knesset committee on October 26 that Israel needs to maintain full control of the territory “for the foreseeable future” — will lead to a breakdown of cooperation and threaten Israeli security.

Nobody but the most paranoid conspiracy theorists thinks the Israeli military would ever consider disobeying the orders of Israel’s democratically elected civilian government. But neither are its leaders planning to ignore the realities on the ground and pretend black is white and up is down in order to feed someone else’s fantasies. And as things on the ground get more and more out of hand, they’re less and less inclined to keep the facts secret.