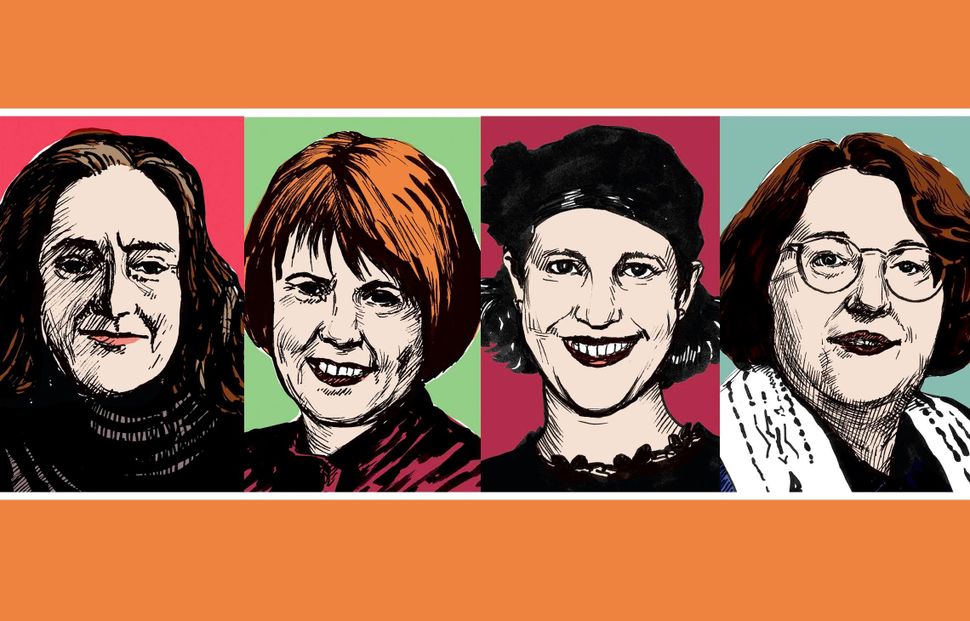 When mainstream Orthodox rabbis repeated their absolute opposition to ordaining women, in a statement issued late on the afternoon of Friday, October 30, I found that my predictable feminist outrage was tempered by an unpredictable shrug.

Really, why should I care about what the Rabbinical Council of America says, anyway? I am not an Orthodox Jew, and don’t need that group of men to legitimate my Jewish experience, an experience made immeasurably richer by the inclusion of women clergy. The growing number of Orthodox women who are studying for and assuming rabbinic roles don’t need the RCA, either; with intelligence, grace, competence and a divine calling, they are changing the face of their movement without an official hechsher from the guys in charge. So there.

But then I began to wonder: Is it my responsibility to speak out against this Orthodox ruling? Or, as a non-Orthodox Jew, do I have no right to voice an opinion ? Whose battle is this to fight?

The RCA’s recent statement wasn’t its first rejection of women’s ordination, of course. It reaffirmed a position announced in 2010 that essentially said: We are thrilled that you women want to study Torah and transmit our heritage. You just can’t act as rabbis. You can’t hold ultimate communal power. You may be exalted in certain spheres, but you will always be less than us in the sphere that counts.

The prohibition was repeated in 2013, when Yeshivat Maharat, the revolutionary New York seminary educating Orthodox women to become spiritual leaders, celebrated the “ordination of clergy” of its first three graduates. Whatever these women were called — rabba, maharat, some new linguistic invention — the very fact that they had “chosen a path that contradicts the norms of our community,” in the RCA’s words, meant that they were not acceptable, period.

There are no new arguments in the latest statement. In fact, most contemporary arguments against women rabbis tend to boil down to Maimonides, the revered Torah scholar and physician who declared back in the Middle Ages that women may not be appointed to a communal position. As far as I can tell, the Halacha, or Jewish law, that prevents women from being rabbis (and presidents of their synagogues, etc.) stems from that and not much more.

The Orthodox are not the only ones to use this proof text. “I was so struck by the RCA statement because it took me back 30 years,” Rabbi Amy Eilberg told me. Before she was ordained the first woman rabbi in the Conservative movement, in 1985, she heard the same defense from the leaders of her movement. “This argument is a sociological argument masquerading as a halachic argument,” Eilberg said.

Once you frame it that way, there is a legitimate expectation that, just as our society has grown accustomed to other once-novel ideas (gay men and lesbians are people, too), the Orthodox will evolve. As Reform Rabbi Sally Priesand, the first-ever woman to be ordained in America, shared with me, “In the early years of my rabbinate, the more people experienced a woman serving as rabbi, the more they were willing to accept it.”

So I respect those Orthodox women who won’t take to the barricades but opt instead for a kind of dogged patience, who express their activism in quietly doing rather than loudly objecting. As she applies for jobs in her final year of study at Yeshivat Maharat, Dasi Fruchter told me: “It doesn’t feel important to me to be called ‘rabbi.’ It is important that people know that I’m a member of the clergy team. It’s a service to be clear to the community.”

Rabba Sara Hurwitz, the remarkable dean of Yeshivat Maharat and the first Orthodox woman ordained in America, walks the same careful line. “The title issue will work itself out in a few years,” she told me. “For me, the important thing is that they are in positions of leadership and authority, to bring about change.”

Unfortunately, the RCA’s recent statement goes beyond denying title to denying authority. No woman is to act as a rabbi, and no institution is to hire her if she does.

Who knows if this will have any immediate, deleterious effect on the 33 women who have enrolled in Yeshivat Maharat since 2009, 11 of whom have been ordained. From my conversations, the opposite seems to have happened. The outpouring of support from men and other women has strengthened their resolve and sense of common purpose. “It feels like a moment when we are finally going to think of ourselves as a movement,” Fruchter said excitedly. “The attempt to splinter us was so egregious that women saw right through it. Through the RCA resolution, I’ve met women in the field I haven’t met before.”

But even patience has its limits.

These women may have no choice but to employ this careful public strategy. But those of us outside the Orthodox world can do otherwise — by pointing out that official recognition does, in the end, matter. And the opinions of those of us outside the Orthodox world matter, too, if we care about human rights and dignity. Denying the right of Orthodox women to become rabbis doesn’t only suppress their personal aspirations and potential contributions to the Jewish community. In a tradition-bound, hierarchical movement, it means that women cannot be in positions of authority, controlling the conditions that rule and sometimes harm their lives.

My concern is that, while we wait for inevitable acceptance, the Jewish community is deprived of the potential leadership of Orthodox women, and those women are not allowed to shape the very real policies that affect other women. Imagine if women had been at the table when Rabbi Barry Freundel’s bullying tactics in matters of conversion from his Washington, D.C., synagogue were first raised. Think they would have covered up for him for years, as the men did?

Imagine if women were able to serve on the rabbinical courts that decide the fate of agunot, imprisoned in abusive marriages because their husbands will not grant a divorce. Think their cries of pain would go unheeded?

The resistance to acknowledging this link between leadership and policy is as widespread as it is baffling. Even a supposedly enlightened man like the Israeli columnist Shmuel Rosner can argue that, because there are a handful of places where women are fully accepted in rabbinic roles, the “movement to liberate Orthodox women — those who want to be liberated — from the Orthodox establishment has won.” How very wrong he is.

Perhaps the RCA’s latest statement, the outcome of a close vote and lacking effective sanctions, does represent a desperate attempt to stem an inevitable tide. But it could also signal a rigidity that time will not be able to soften. We all — Orthodox, non-Orthodox and everyone in between — have a responsibility to fight that.

Editor’s Note: A previous version of this article incorrectly stated that male leaders at the RCA covered up “Rabbi Barry Freundel’s violations of peeping at women in his Washington, D.C., mikveh.” Instead, it has been reported that the RCA knew of Freundel’s bullying tactics in matters of conversion. The article has been updated to reflect that.