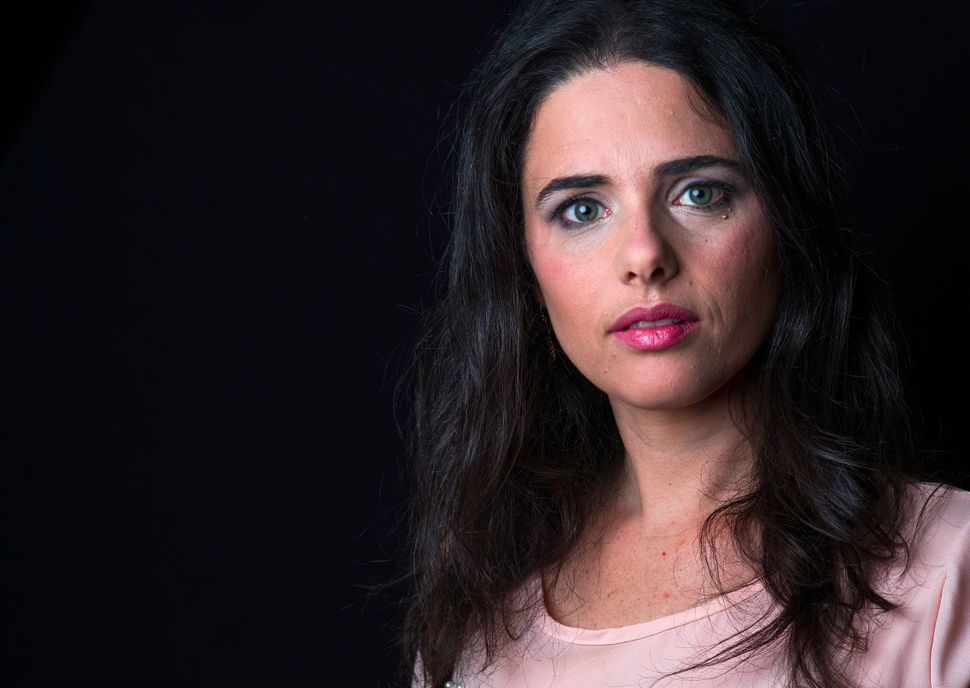 If you’re concerned about Israeli Justice Minister Ayelet Shaked’s introduction of a bill and to self-identify documents they submit to legislators, read on.

If you’ve heard about Vladimir Putin’s decade-long campaign against NGOs in Russia with foreign funding, which led to eventually kicking almost all of them out and to undermining any vestige of democracy in the country, read on.

If you are outraged at the suggestion that Russia and Israel are on converging paths in their political systems, read on.

If you have ever heard of Jews having to wear special badges in Europe during the Holocaust, read on.

If you believe that the Likud and other right-wing political parties in Israel receive massive amounts of foreign funding, and are wondering if its members also need to wear special badges to identify themselves as foreign agents, read on.

Well, if you had read this far, you get the picture.

At this point I must acknowledge that I am not an Israeli, but a progressive American Jew with a critical, skeptical mind born of an obstinate Litvakish nasty streak. Yet, when I think and talk about political systems, I am not uneducated: I have a Ph.D. in politics from Princeton University and am a student of comparative politics.

And, while I do not know Israel as well as I’d like, having visited only a couple of times, I know Russia extremely well. I have spent 40 years of my life managing, creating and leading cooperative science programs between the United States and the former Soviet Union, especially Russia. I’ve been there 64 times. I speak fluent Russian. I’ve led two major NGOs that have had a great impact on Russia, and their funding has included major donations from two well-known philanthropies that have since been kicked out of the country because they have vigorously advocated civil society and human rights.

So, when I see that Israel’s Justice Ministry proposes to clamp down on foreign-funded NGOs, I know that this is a dangerously slippery slope. I understand the mentality: deeply defensive, paranoid, xenophobic and profoundly anti-democratic. I know where it leads. It is never satisfied until it exterminates democracy itself.

I know, I know, I have heard it so many times. What better proof is there that Israel is a democracy than the vigorous debates in the press, on the streets, in the Knesset, everywhere? The decibel level and the obnoxiousness, frankly, are overwhelming. It is a paradise of yelling heads. But the real mark of a democracy is not how loudly people talk or how disrespectful they are to one another, but exactly the reverse — how well they tolerate dissent.

Now, if you want to see lively debate and discussion, you could also look to Russia. At least, you could have looked to Russia 10 and 20 years ago, when brawls broke out on the floor of the Duma, when unheard-of critical tirades from left and right appeared in print throughout the country, and when foreign-funded NGOs were still operating, though under the ever-expanding, arbitrary and ultimately successful persecution by the Russian Federation’s Ministry of Justice. At the same time, of course, the Russian government was cracking down on the press. Today, these voices have largely been silenced.

It’s a slippery slope. It all begins with intolerance, fear of criticism and what I see as a deep, underlying lack of confidence in the moral and intellectual basis of one’s position. Its logic is inexorable. It is never satisfied with excluding one group, because there will always be more. Persecution will spark increased opposition. Both sides become desperate. And the one with the power wins.

Unless, of course, the citizenry wakes up to what’s going on and tries to vote the villains out of office. But by that time it is often too late.

Where has the Israeli right wing gotten the idea of persecuting foreign-funded NGOs? While we can’t say for sure, it’s worth noting that there is a large expatriate Russian population in Israel. And some of Israel’s leading politicians come from Russia.

But really, the badges are the telltale clue. What an abomination. As a famous historian once wrote, “history…repeats itself twice.” He added, “the first time as tragedy, the second as farce.” But this latest Israeli episode sounds more like it has the makings of an even greater, more self-destructive tragedy.

Dr. Gerson Sher is a political scientist who has managed and led scientific cooperation programs with the USSR and Russia for government and nonprofit organizations.