Why Disrupting Israeli Law Professor’s Speech Was So Wrong 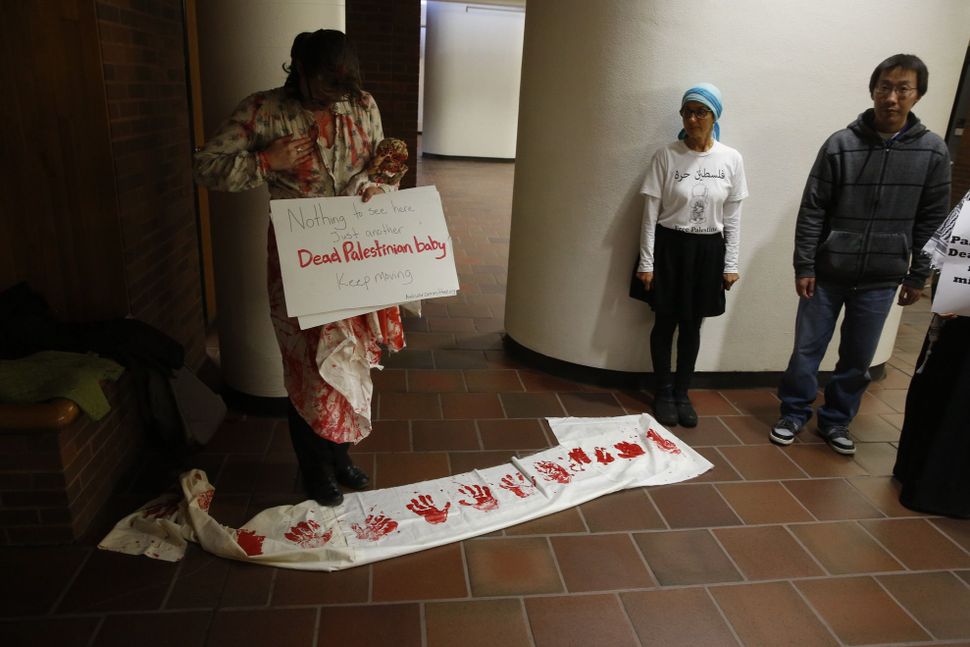 Image by University of Minnesota

Why did the disruption of Moshe Halbertal’s recent lecture at the University of Minnesota Law School garner such widespread attention? Halbertal, a noted Israeli philosopher and professor, was invited to the law school to deliver the John Dewey Lecture in the Philosophy of Law. But the lecture was delayed 40 minutes by shouts and chants until protesters were escorted out of the lecture hall (eventually, three were arrested). This was not the first, the largest or even the most strident anti-Israel protest on an American campus. So why the national, even international, attention in this case?

Perhaps it was surprising that such a demonstration would take place in Minneapolis, given our reputation for “Minnesota nice.” Minnesotans tend to be polite. We don’t like to challenge or to ruffle feathers. Like the residents of our legendary Lake Wobegon, we are hopelessly dispassionate. Perhaps this disruption was unexpected, given the speaker and his topic. Halbertal is a self-proclaimed critic of the Israeli government and was speaking about the need for soldiers to assume greater risk to their own lives to protect the lives of noncombatants — hardly the stuff to incite such a passionate response.

No, unfortunately, what riled up the roughly two dozen disruptors is more ominous than that. And Halbertal named it in a previous lecture. It’s because he is Jewish and he believes in Israel’s existence.

Two nights before his law school lecture, Halbertal lectured in my own Beth El Synagogue, as part of the University of Minnesota’s Center for Jewish Studies’ outreach program. His topic was “Gaza, the IDF Code of Ethics, and the Morality of War.” After describing the tenets of the Israel Defense Forces code and how he trains IDF soldiers in these principles, Halbertal was challenged respectfully by an audience member who charged him with ignoring the primary issue, the occupation. The questioner challenged Israeli policy explicitly, and Halbertal’s presentation implicitly.

Halbertal responded with thoughtfulness, as the critical academic that he is. At the same time, he revealed his own “dovish” political leanings, thus acknowledging the questioners’ very concerns and perspectives. How unfortunate that the same high-level exchange was not present in the John Dewey Lecture at the law school. But from the outset, disruptors were not open to hearing his explanation. And Halbertal anticipated exactly why. Responding to the question, he said: “I wish that Hamas was only about the occupation…. But not all of the conflict is occupation related, unfortunately. Even if you finish the occupation, and I hope we will, you’re still going to need a strong, vital army in Israel. I am saying something not pleasant to liberal ears: The end of the occupation will always be dependent on the asymmetry of power” between Israel and her Arab neighbors. With this, Halbertal acknowledged that for some, the issue is Israel’s very existence. And it was Israel’s very existence to which these disruptors objected.

For Jews, learning is at the heart of living. We see it as central in the life of our religious communities and critical to the well-being of our country. Scholars are held in the highest esteem. Children are expected to pursue high levels of academic achievement. For these reasons, we place great significance on university studies and see strong universities as essential assets of our Jewish and general community. That is why we take this threat to academic freedom so seriously. But there is another reason.

This was not an isolated incident, and it involves more than just the issue of academic freedom. It is part of a campaign that targets Israel and intimidates Israel supporters, Jewish students and professors of universities across the United States. In many cases, the methods and slogans of protesters reveal their true intent — not the exchange of ideas, but the destruction of Israel as a Jewish state.

This, then, is why the disruption of the Halbertal lecture is newsworthy.

This was not Berkeley, California, or Brooklyn; this was America’s heartland. And yet, this was the first time Halbertal has ever been disrupted at a university lecture. That is what’s disturbing.

This was not a West Bank settler, an Israeli soldier or a politician; this was a scholar, an ethicist, a writer. That is what’s distressing.

This was not a demonstration or a rally; it was an academic lecture in a distinguished law school. That is what’s so troubling.

This was not a demand for Israel to return to the negotiating table or to “even” a petition for divestment. It was, quite literally a call for Palestine “from Sea to Sea.” In the words of Oren Gross, the university’s law school professor who introduced Halbertal: “The protests occurred because the speaker was an Israeli and a Jew. That, too, is anti-Semitism.” That’s what makes this so painful.

John Dewey, the philosopher and educational reformer for whom Halbertal’s lecture was named, taught that “education is not the preparation for life; education is life itself.” If so, then this relatively minor disruption of a liberal professor in a university lecture hall is not simply preparation for what today’s students will face when they leave campus. No, Halbertal’s lecture taught all of us that this is life as we now know it. That is what makes this so noteworthy — and so scary.

Why Disrupting Israeli Law Professor’s Speech Was So Wrong