After Charm Offensive, Time for Benjamin Netanyahu To Act for Israel’s Sake 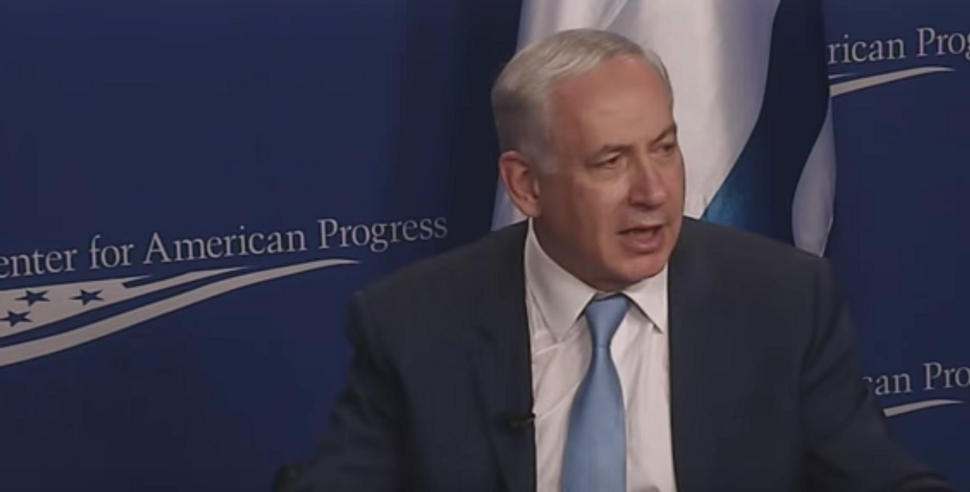 Image by Center for American Progress

President Obama and Israeli Prime Minister Benjamin Netanyahu have made up, and American Jews can breathe a sigh of relief. Such is the conventional wisdom, anyway, the first reaction of those among us who become anxious, angry or alienated every time leaders of the U.S. and Israel are at odds, as if we are children fretting when our parents argue in front of us. That’s happened a lot in the past six years, ever since these two very different men assumed office within months of each other and set off a turbulent relationship that careened from testy to good to horrible. And now to good again.

Netanyahu, on his first American visit since his controversial address to Congress opposing an Iran nuclear deal that was destined to be approved, turned on the charm, all but gushing over his “very good meeting” with Obama. “He’s had more meetings with me than any other leader,” Netanyahu said the day after his trip to the White House. “And I deeply appreciate that.”

Although Obama bested Netanyahu in the Iran standoff, the president declined to gloat, and instead focused on affirming bilateral ties by pledging to increase U.S. military support for Israel. This must be a Democratic party line nowadays. In an exclusive opinion piece written for the Forward, front-runner Hillary Clinton also declined to criticize the Israeli prime minister, and instead reminded readers that she has “stood for Israel my entire career” and continues to do so today.

So the strategic imperative of publicly repairing the frayed bonds between the Israeli government and American liberals — still the political identification of most Jews here — is well on its way. (At least for the moment.)

But no matter how some in the media cynically portray it, this diplomatic crisis would not have been averted if only these two headstrong men with clashing personalities had gone for relationship counseling. The periodic missteps by both Obama and Netanyahu made matters worse, true, but those difficulties only obscured their deeper, substantive divide over how to find a solution to the Palestinian conflict. Or over whether a solution is possible at all.

Let’s begin with the conflict’s origins. For Obama, it essentially started in 1967, when Israel won a huge military victory and, in subsequent decades, exerted control over the West Bank and its majority Palestinian population.

For Netanyahu, it began earlier, in the 1920s, when his father first came to the land of Palestine and faced the enmity of his Arab neighbors.

For Obama and the presidents before him, the crux of the conflict is an occupation now going on for more than 48 years, and the continued Jewish settlement that makes a viable Palestinian state less possible.

For Netanyahu, the crux is implacable Arab hatred and unwillingness to recognize the Jewish claim to the State of Israel.

For Obama and the presidents before him, the solution lies in territorial compromise to create an independent Palestine with guarantees for Israel’s security.

For Netanyahu, before any territory is compromised, Palestinians must acknowledge Jewish sovereignty in Israel. Again and again on this visit, he asserted that the breakdown in what used to be called the “peace process” is not due to settlement activity — which Netanyahu erroneously minimized — but to “the persistent Palestinian refusal to recognize Israel as a Jewish state.” This refusal predates the 1967 war. It predates even the 1948 war.

There is truth in the worldview of both men, of course, but also a bitter irony. The heroic attempts by Obama, Clinton and especially Secretary of State John Kerry to forge a negotiated compromise between Netanyahu and Palestinian Authority leader Mahmoud Abbas were predicated on action by both sides. And, for varying reasons at varying times, both sides balked.

Netanyahu’s insistence on recognition, conversely, requires action from only one man: Abbas. With this approach, the Israeli leader deftly absolves himself of responsibility for making the first move, and can continue to placate Israel’s growing cadre of religious Zionists by approving the steady expansion of existing settlements and the surreptitious creation of new ones.

The Jewish leader has also done a very un-Zionist thing: He has put the future of the State of Israel, the haven for Jews everywhere, in the hands of a largely ineffective Palestinian leader. Jewish agency is pushed aside. Until Abbas utters the right words, the status quo remains.

The status quo, however, is an illusion. Young Palestinians are seething under an occupation older than they are, and a political structure unresponsive to their needs. Nothing, nothing justifies the indiscriminate violence visited on Israeli Jews in recent months. But even Israeli security and military experts have said that the violence is driven in part by Israel’s own behaviors. As long as those behaviors continue, there’s no telling when the tinderbox will explode.

Israel does not have to place its fate in someone else’s hands. It can take steps to build confidence by restricting settlement growth, or initiate bolder moves to unilaterally withdraw from certain Palestinian areas.

David Makovsky of the Washington Institute for Near East Policy asked Netanyahu about a unilateral move at the Center for American Progress, and the prime minister tiptoed toward an equivocal answer. “I suppose that’s possible, too, but it would have to meet Israeli security criteria,” he said.

“He opened the door to some sort of unilateral movement,” Makovsky interpreted afterward. “It’s the first time he’s opened that door. Now I just hope it stays open.”

And just as quickly, Netanyahu shut it, walking back the comments as soon as he returned to Israel.

The wisdom of unilateral moves aside, Israel as a Jewish and democratic state cannot wait to be defined by others. Not by Americans, not by Palestinians. The handshakes and smiles at the White House make us all feel a little better, but the underlying differences will continue to haunt this relationship until the very nature of the Zionist enterprise can be resolved.

After Charm Offensive, Time for Benjamin Netanyahu To Act for Israel’s Sake