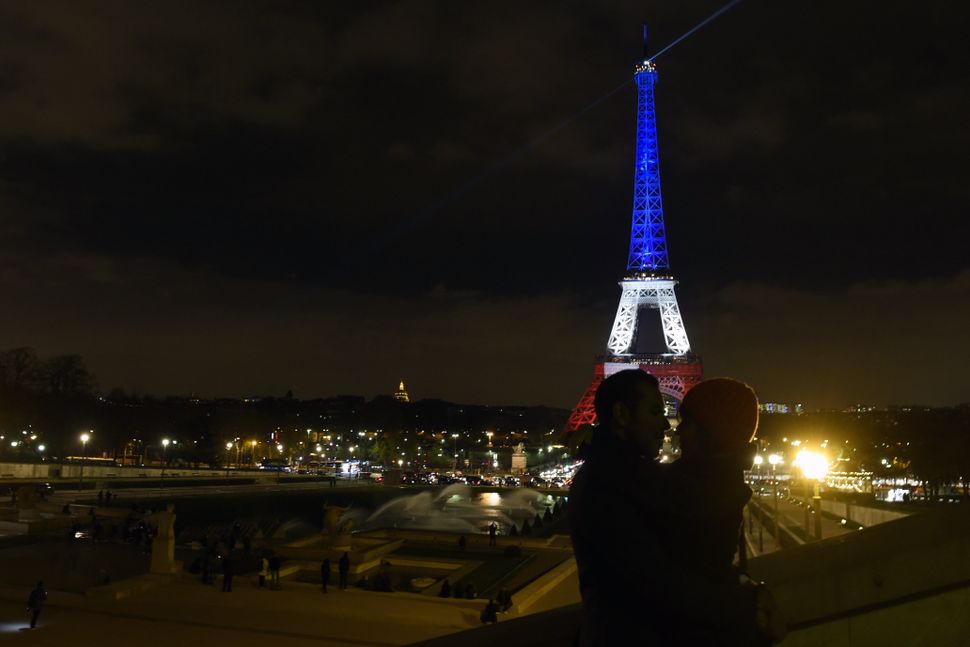 Shabbat at my grandparents’ place, last Friday. They live in a house near Paris, in this troubled area known as la banlieue (the suburbs) where I grew up as a child, as a Frenchman, as a Jew. This is home, my happy childhood’s landscape. We are just a few miles away from Le Stade in the Saint-Denis neighborhood, where the first Paris attack occurred. At this moment, France is still full of life and joy.

When I got to my grandparents’ place at four in the afternoon, their kitchen smelled of homemade bread, that kind of smell you can only experience in a French household (in fact, it was both baguette and challah). That night, we talked, we sang the Kiddush, we ate dinner. It was, as usual, a peaceful moment far from the world. Everything was fine. It reminds me of Voltaire’s words in “Candide”: “Tout va pour le mieux dans le meilleur des mondes” (“All’s for the best, in the best of all possible worlds”). But, as in his novel and in reality too, the worst was yet to come.

In the meantime, my fiancé was at her parents’ house in Paris, celebrating Shabbat with her sister, who had come from Israel. The last time she came to Paris, Charlie Hebdo was targeted and French Jews experienced another round of bloodshed in a kosher grocery store, the sadly famous Hypercasher at Porte de Vincennes. As they are strictly Shabbat observant, my fiancé’s family had switched off their TV, cell phones and every other electric device. And so, like many other religious Jews, they only knew about the terrorist attacks the following morning when they got to synagogue, or even later, after sunset on Saturday night.

On the other side of the French capital that Friday night, my brother was hanging out with friends in the Saint Michel neighborhood. It was a basic Friday evening in France, with people doing whatever they want according to their beliefs, praying or not praying (most of them were celebrating the end of the week in restaurants, movie theaters or cafés, drinking or having dinner; remember, we are in Paris, one of those places where religion isn’t a big deal…)

As I don’t strictly observe Shabbat, I was watching soccer on TV. The French national team was playing against the Germans. It was one of those games you don’t want to miss. I first thought of buying tickets to go watch the game live at the stadium but then remembered it was a real pain to get to Le Stade de France in Saint-Denis. There, you can easily wait an hour before finding a place to park your car. Plus, it gets really complicated when you want to enter or leave the place, as the exits are too tiny for an attendance of 80,000 soccer fans.

For these banal reasons, I decided to stay home that night. During the game, two bombs exploded. When they heard the explosions, the players on the field looked surprised but they continued to play as if nothing had happened. On the bench, nobody told them about the terrible news, as authorities did not want people to panic inside the stadium. Outside, suicide bombers took action on French soil. France was under attack, once again. A neverending nightmare.

That night, Twitter was rife with rumors. Several attacks were said to have taken place in at least five places in Paris. Le Bataclan, a concert hall located just a few subway stations from my home, a place where I saw bands like The Kills or Mac Demarco playing live, was under heavy gunfire. It’s one of these cool spots in Paris not far from la Bastille, Oberkampf and la Nation, just a few blocks away from les Inrockuptibles, a magazine I worked for for a few years (Guillaume Decherf, one of their journalists, was killed during the attack). When terrorists burst into the concert hall, a Californian band called Eagles of Death Metal was playing. Josh Homme, its leader, is one hell of a singer. Ignoring the BDS calls, he bravely toured in Israel this summer. Was the band targeted for this reason? I still wonder…

When I first heard news of the terrorist attacks, I called my brother and told him to go back home as soon as possible. He was having a good time with his friends Antoine, Jacques and Youssef. One is Catholic, the other is a Jew and the last one is a Muslim. They are the faces of modern France, all living the same lifestyles and sharing the same values.

On the phone, my brother described to me the incredible panic in the streets of Paris: people running away, police yelling at them, everyone trying to save his or her own life. War at our doorstep.

Once again, terror is striking Paris. Luckily, in my immediate surroundings, everyone is safe and sound. But France is worried and its Jews are desperate.

Over the last decades, the Jewish community and its leaders have warned again and again about the rise of radical Islam among young nationals, about the threat it represents for the whole nation and not only the Jewish community. These warnings have been heard, yet no action has been taken. We are now paying the price for this blindness, not only as Jews, but as Frenchmen.