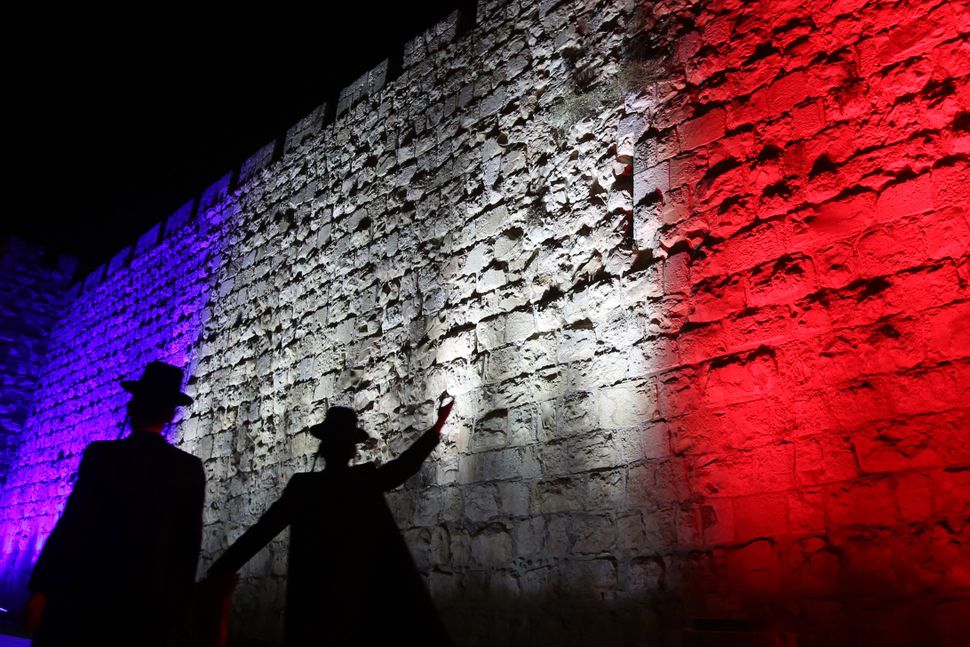 On Saturday night in Jerusalem, out of solidarity with the French Republic, the walls of the Old City near the Jaffa gate were illuminated in blue, white and red. In Tel Aviv, thousands of Israelis flocked to Rabin Square to stand in support of the French people. The response of the global community, Israel included, to the terrorist attacks in Paris has been both powerful and emotional — a sharing of grief, prayers and sympathy. But in Israel, the narrative has been different than in the rest of the world.

As thousands grieve in the streets of Paris, many Israelis have found a sense of camaraderie in a greater struggle. “Terrorism in Paris, Jerusalem and around the globe is fueled by the same murderous hatred and extremist ideology that aims to abolish our civilization and our values,” Jerusalem Mayor Nir Barkat .

But to frame Israel as a victim to the same violence — motivated by religious extremism — that claimed the lives of over 120 people in Paris, is to suggest that the Israeli government is politically blameless, and to exonerate Israel from all guilt in the occupation of the West Bank and East Jerusalem.

The belief that Israel leads the struggle of the West against Islamic fundamentalism is the same belief that allows Netanyahu to equate Hamas with ISIS and Boko Haram, and to claim, “Radical Islam is all around us and is also extending its arms into our midst… First it was missiles and now it is knives.” It allows Netanyahu to suggest that terrorism in Jerusalem has nothing to do with political struggle, but stems purely from religiously or ethnically motivated hatred.

And yet, as J.J. Goldberg has pointed out in the Forward, the Israeli military intelligence community believes that the recent uptick in violence is a result of tension over the Temple Mount, Israel’s failure to adequately resolve the case of the murder of the Dawabshe family in the West Bank, and a general feeling of economic and political frustration, especially among Palestinian youth. A sense of hopelessness.

Equating the violence in Israel with the violence in Paris allows many thoughtful and intelligent Israelis to escape into the seemingly innocuous process of framing the Israeli-Palestinian conflict as an inevitable struggle against an unworkable conflict with a population of extremists. But the conflict is not inevitable, and the Palestinian population is not inherently extremist. To claim otherwise is to willfully sabotage the chance for peace, and hence to become complicit in the ongoing depravation of Palestinians’ basic human rights.

To be clear: Violence both in France and in Israel is deplorable. There is no excusing or rationalizing terrorism — not in Paris, not in Jerusalem, not anywhere. At the same time, the attacks in these two places are not the same. As Goldberg has argued, Israeli government officials cannot pretend that their policies of continued settlement and ongoing occupation do nothing to foster a hateful atmosphere in which anti-Israel sentiment more easily flourishes, and that all Palestinian violence against Israelis stems purely from age-old anti-Semitism.

The political opportunism goes beyond the offices of the prime minister and Jerusalem mayor; Israeli political commentators have joined the chorus as well. Via Twitter, respected journalists like Dan Margalit used the opportunity of the Paris carnage to imply that Israel is unfairly judged for its policies toward the Palestinian people.

No matter how many soldiers wielding assault rifles take to the streets, Paris is not Jerusalem. And no matter how much Israeli politicians call for a world united against Islamic fundamentalism, Israel is not France.

Lighting the walls of Jerusalem in the colors of the French Republic is not a sign of solidarity; it is a sign of ignorance and escapism.