What Donald Trump Can Learn from Hanukkah 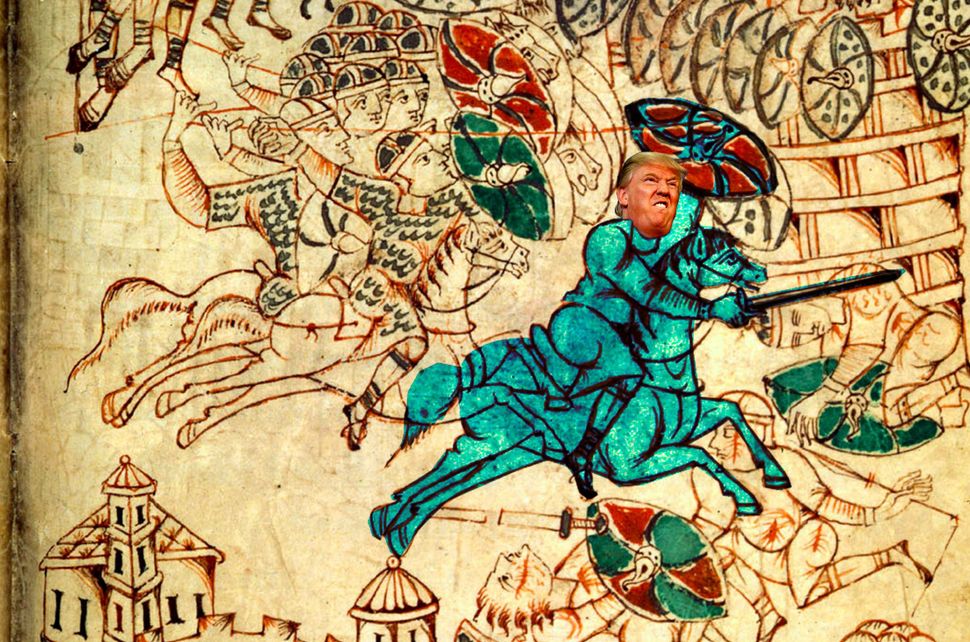 It’s that time of year again. The Thanksgiving turkey carcass is stripped clean. The snow boots are retrieved from the back of the closet. And politicians are renewing their annual complaint that Americans don’t say “Merry Christmas” anymore.

Actually, Donald Trump first tackled this issue months ago, campaign visionary that he is, promising that we will all hear “Merry Christmas” many times if he is elected president, a pledge he then repeated a few weeks ago, and will no doubt tell us again, especially if he thinks that evangelicals are in the audience.

Because, as he said in September, “you know, other people can have their holidays… but Christmas is Christmas. [Remember] the expression ‘Merry Christmas’? You don’t see it anymore. You’re [going to] see it if I get elected, I can tell you right now.”

We who do not celebrate the birth of Jesus Christ are well aware that Christmas is Christmas even in this supposedly secular country, since schools and businesses close, the mail isn’t delivered, and good luck finding a restaurant open outside Chinatown on December 25. But Trump isn’t speaking to us. He’s speaking to those aggrieved Christians who are receptive to his race baiting and fear-mongering because they are afraid that “the other” is transforming their country into something unrecognizable.

So we have a humble suggestion. After resurrecting the ubiquitous Christmas greeting, Trump and others like him should study the holiday of Hanukkah.

Not just the Hallmark version, designed to alleviate the red-and-green envy of Jewish kids stuck with a minor holiday that cannot compete with the major tinsel event of stage, screen and department store sales. They should study and learn from the deeper truth: that religious zealotry won its freedom, but the victory was temporary, and the resulting civic divisions brought heartache for the Jewish people.

These would-be leaders know, or should know, the child’s story of Hanukkah: how the underdog Jews, led by the brave Hasmonean Maccabee brothers, overcame the tyrannical Syrian-Greeks to reclaim their religious freedom and purify the Temple, which was lit by a one-day supply of oil that miraculously lasted for eight days. A menorah fully ablaze on the eighth night may not be as spectacular as a shiny, glamorous Christmas tree, but its swelling march of candles does emit its own beauty and meaning.

So start there. But continue on, and delve into the truth about Hanukkah that is too often ignored. “For it turns out,” Rabbi James Ponet wrote in Slate, “that Hanukkah is a festival built upon a mound of suppressed memories and censored texts, a putative celebration of light that in fact commemorates a Jewish civil war.”

A civil war that, as Abigail Pogrebin pointed out on these pages last year, pitted Jew against Jew in a blood-soaked struggle that rendered “a split in the Jewish soul.” There’s a warning here for the American soul, as well.

Those brave Maccabees and their followers actually went on to brutally impose their form of traditional observance on fellow Jews who had become too Hellenized (read: assimilated), to the point of forced circumcisions and other ugly behaviors. The Hasmonean state declined into a despotic tyranny like other political-military entities in the region. Our freedom fighter heroes turned out to be lousy statesmen and, evidently, not very nice people.

Zealotry bred division, and in the end the state collapsed. Some rabbis and scholars have molded that message into a cautionary tale for today’s fractious Jewish community, stressing the need to go beyond our increasing polarization over how Judaism is practiced and how Israel is supported in order to prevent the sort of infighting that doomed the Hasmonean experiment.

“When parts of the Jewish community drift too far from the center, and can no longer accommodate each other, we invite tragedy,” warned Jonathan Engel, a professor with the City University of New York, writing for the Conservative movement’s magazine, CJ.

The same is true on a larger and, frankly, more consequential scale for America.

When a candidate like Ted Cruz argues that only Christian Syrian refugees should be allowed into the United States, we shouldn’t frame his remarks in only the context of the political horse race. We should consult history and the Constitution, and worry about how such statements sully the American character.

And when other candidates stay silent as these wrong, hateful assertions swirl around our new, fact-free public square, they make themselves complicit in the degradation of our discourse.

Political campaigns are nasty exercises — always have been — and no party or ideology is immune. But the unrepentant racism and xenophobia heard today go beyond the conventional name-calling and negativity to something more corrosive — an attempt to pit one American against another, to infiltrate that dark space of fear and fill it with suspicion of those who look, speak, act and pray like the “other.” Really, to distort who we ought to be as Americans.

The story of Hanukkah is about liberation and light, but also about the struggle over what it meant to be Jewish and who was allowed to define that identity. As Ponet noted, the Jews resisted Greek culture, yet they were also transformed by it, becoming Greek without ceasing to be Jews. “Here we find the historical miracle that Hanukkah implicitly celebrates: the capacity to sustain intimate relations with another without totally ceding your own sense of self, the ability to love without permanently merging,” he wrote.

So after we’ve all learned to say “Merry Christmas” again — as if that phrase were ever truly banished — let those who are deliberately dividing the American soul absorb the lesson from that other holiday in December.

What Donald Trump Can Learn from Hanukkah