Why Israeli Flags Don’t Belong in Synagogue — or American Ones, Either 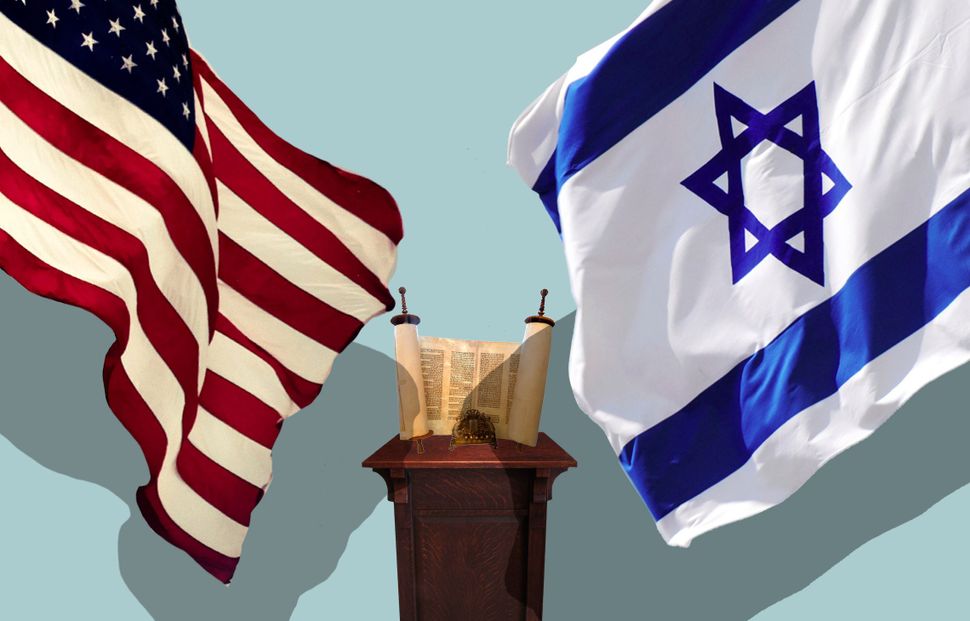 Over the past couple of years, I have spent many Friday evenings at Brooklyn’s various egalitarian independent minyanim. My partner introduced me to this world, and I appreciate it for its vibrant, welcoming, progressive community.

I also find these informal prayer spaces refreshing because no Israeli or American flags are present. Unfortunately, many New York synagogues display cloths of nationalism on both sides of the bimah, the central, raised platform that holds the Holy Ark.

When I enter Jewish places of worship, I try to focus my energy on the melodies, hymns and community I encounter. But the flags rupture my concentration. They inject toxic and divisive politics into a space that should provide a respite from those concerns. And they tether a diverse and opinionated Jewish community to nationalistic sentiments some members don’t agree with: support for the state of Israel and the U.S. government.

Many progressive Jews agree with me that the national pennants have no place in synagogues. The ultra-Orthodox, a denomination I find little kinship with in other areas of Jewish life, also with me. But most of the institutions I am at home in because of their egalitarian prayer — namely, Reform and Conservative synagogues — don’t see a problem with the flags, despite their implications. Rabbi Denise Eger, the president of the Reform-affiliated Central Conference of American Rabbis, told me that for Jews in the United States, the Israeli flag “speaks to our identity and connection to the people of Israel.”

But the institutional consensus on the flags has changed alongside history and Jews’ shifting politics.

Jews in the United States first began placing the country’s flag in synagogues around 1898, when the Spanish-American War sparked a bout of patriotic fervor. Jonathan Sarna, a professor of Jewish-American history at Brandeis University, said many synagogues neglected or altogether removed national emblems during the Vietnam War, but brought them back after September 11, when another era of fervent nationalism began. After the terror attacks, he remembers seeing emails on listservs from Jews asking: “Does anybody have a flag they can lend us?”

The Zionist flag, which came to represent the state of Israel after its founding but which Boston Jews had displayed long before, also began appearing in American synagogues in the 1890s. However, it mostly appeared in Conservative prayer spaces; the Reform movement kept Zionism at arm’s length until the Holocaust. Concerned with charges of “dual loyalty,” Reform Jews strongly asserted their Americanness. Even after the Holocaust, in 1954, the Central Conference of American Rabbis said the Israeli flag “is quite out of place in an American synagogue.”

READ MORE: Politics Has Always Had a Place in Synagogue — and for Good Reason

The 1967 war, when Israel defeated Arab armies and began its occupation of the Palestinian Territories, transformed the Jewish-American relationship to the country. Reform Jews, who saw Israel as heroically fending off a mass of Arab fighters, embraced the state with a newfound intensity. By 1977, the Central Conference had rescinded its objection to the placement of Israeli flags in Reform synagogues.

This history fuels my discomfort. The victors of the Spanish-American and 1967 wars used their conquests to enlarge empires and occupy and colonize other people’s land. The flag-waving after September 11 smothered dissent in a country that went off to war and rounded up many of its own citizens. Nevertheless, the presence of both the American and Israeli flags goes unquestioned in Jewish-American spaces of worship.

The idea that synagogues should remove flags has little institutional support, but at least one Jewish spiritual leader agrees with me. Brant Rosen, the rabbi of a non-Zionist congregation in Chicago, told me his main objection to flags’ presence is theological.

“Putting national symbols next to the Aron Kodesh [the ark for the Torah], the innermost sacred place of the synagogue, and bowing toward it on a regular basis when you’re gathering for services” is “profoundly problematic,” he said. While his political objections to the flags’ presence are secondary, Rosen added that “historically, when we attach nation-stateism to a sense of religious purpose…we’ve seen a lot of misery in the world.”

If he had a synagogue — his congregation currently prays in a church — no Israeli or American flag would wave.

Perhaps the next time I really need a synagogue — on the High Holy Days, for instance — I’ll find a way to pray in Chicago with Rosen. But if I can’t make it to Illinois, I’ll find a space in New York without the flags.

Alex Kane, a former editor at Mondoweiss and AlterNet, is a New York-based freelance journalist whose work has appeared in Haaretz, the Los Angeles Review of Books, The Intercept, VICE, Al Jazeera America and more. Follow him on Twitter @alexbkane.

Why Israeli Flags Don’t Belong in Synagogue — or American Ones, Either