How Republican Hate for Obama Is Burning Up the Planet 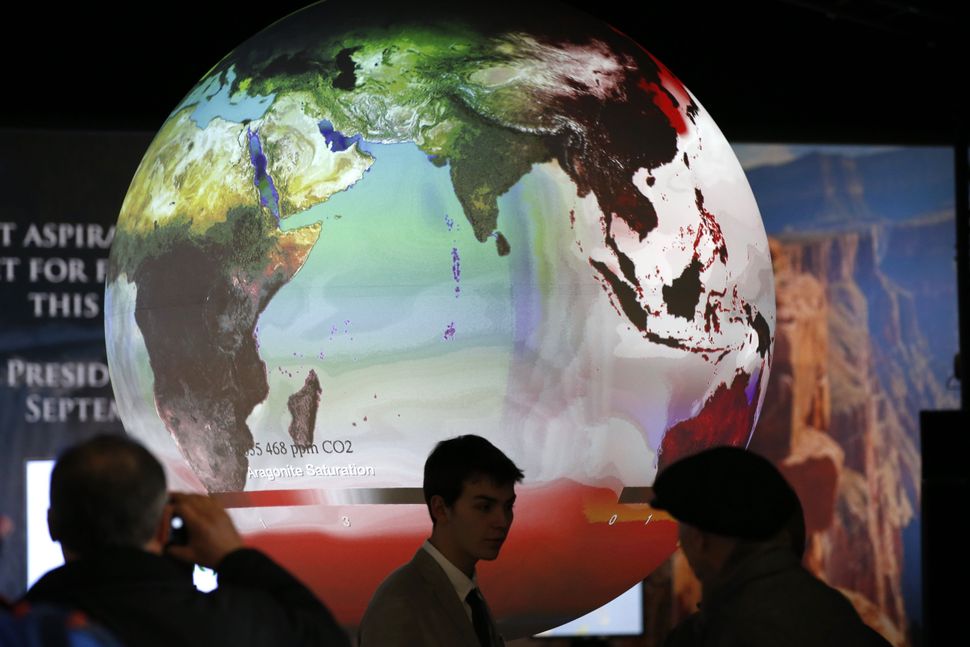 When we talk about the Paris climate talks, most of our attention goes to the tug-of-war between the rich and poor nations. They’re playing chicken over who’ll pick up the tab for warding off disaster.

But there’s another confrontation simmering at the edge of the major conference. Discussed mainly in whispers, it carries much higher stakes for the planet. I refer, of course, to the conflict between the Republican Party and the rest of humanity.

Here’s the big difference between those two face-offs: One is a fight over how best to structure and organize an emergency campaign against climate change, seen by near-universal scientific and diplomatic consensus as the most serious threat facing the human race. The other is an argument over whether the threat is real or whether thousands of scientists conspired to make it up.

It’s no secret that the Republican Party is currently in the midst of a big family feud. We’ve all seen Donald Trump’s Muslim-bashing and the fierce quarrel he’s ignited among Republicans. The outcome matters. It will touch many lives and impact our national security. It will also tell us a lot about the character of the American nation.

The climate debate isn’t like that. The Republican Party isn’t divided on this issue; it’s made up its mind. Indeed, it’s moving forward with deliberate speed, firing on all cylinders to block efforts at combating the world’s climate crisis.

There are dissenters here and there. Some congressional Republicans say they understand the threat. But the party’s consensus is overwhelmingly dismissive. In both houses of Congress, a climate change skeptic or outright denier chairs all but one of the committees dealing with science and the environment. (The exception is John Thune of South Dakota, chair of the Senate science committee.)

The last serious congressional effort to slow carbon emissions died in the Senate in 2010. Since then, the Republican leadership has focused its efforts on preventing President Obama from using his executive powers to reduce emissions.

Scientists have been warning urgently since the 1970s that the world is headed into a nightmarish future because of what’s called the greenhouse effect, in which a slight rise in overall global temperatures will create massive environmental changes. The process, now familiar to schoolchildren, involves the burning of fossil fuels — oil, coal and natural gas — that release carbon dioxide into the atmosphere, trapping the sun’s heat.

Pessimists were predicting that by the end of the 21st century we’d see glaciers begin to melt, raising sea levels and threatening coastlines. Warmer oceans would increase moisture in the air, changing wind patterns and also intensifying storms, droughts and other extreme weather.

In 1992 the United Nations convened a global summit in Rio de Janeiro to address the threat. Europe and Japan were developing a plan involving cuts in developed nations’ carbon emissions, plus aid to developing nations to minimize environmental damage while rising from poverty. President George H.W. Bush, who had a reputation as a moderate environmentalist but faced growing Republican resistance, told the summit that the United States wouldn’t accept limits on its activities.

Since then, the Europeans and the U.N. have been jawboning, producing mountains of earnest reports and chasing their tails. Washington has stood aloof, pursuing its own modest emissions cuts under both Bill Clinton and George W. Bush, but spurning international treaties. Without leadership from America, the world’s superpower and biggest carbon emitter until 2007 (when China leapt ahead), negotiations floundered.

In the past decade, three big things changed. Most dramatically, the scientists’ worst-case scenarios started coming true a half-century earlier than even pessimists predicted. Polar ice is melting, oceans are warming, droughts are ravaging farmlands from California to East Africa. Some small island nations have begun disappearing due to the rising sea level, as have parts of Miami Beach. Floods, superstorms and deadly heat waves are destroying crops and property and killing thousands. A new U.N. study says weather disasters have nearly doubled in frequency since the late 1980s. Hardest hit of any nation: the United States.

A steady stream of reports from the Pentagon, the Navy and the CIA warn that climate change is one of the most serious threats confronting America’s national security. Among other things, the reports say scarcity caused by drought and disaster will destabilize whole regions and spark uncontrolled migrations northward.

The second big change is Obama’s decision to take America off the sidelines and take the lead in the global climate struggle. After a flubbed appearance at a Copenhagen summit in 2009 and the failure of his energy bill in 2010, he’s entered one-on-one talks with China, India and others. Unable to pass legislation through the GOP Congress, he’s used executive authority. In 2013 he ordered the Environmental Protection Agency to impose carbon limits on power plants. Last summer he vastly expanded the EPA’s role and set the stage for phasing out coal-generated electricity.

Now, with a climate policy that meets international expectations, he was able to go to Paris and join the global talks as a serious player. America could resume its role as superpower and world leader.

The third change is the sharp rightward turn of the Republican Party. It’s visible in virtually every arena, but most intensely on climate change. The modest climate activism of George W. Bush has given way to a policy of blanket denial. Liberals blame big oil money, but it’s more complex. The growing influence of Christian millennialism is a big factor. So is Obama derangement — the conviction that Obama is uniquely dangerous and must be opposed at every turn.

Until recently, the skirmishes followed tradition and stopped at the water’s edge. Beginning last spring, during the Iran nuclear talks, that last shred of civility disappeared. The GOP announced itself on the world stage with its own foreign policy, warning the nuclear negotiators that the next president wouldn’t be bound by the agreement. Congress was effectively disavowing the president’s authority.

But it was still just talk. Paris takes the Republicans’ insurrection to the next level, promising not just talk, but also action, to derail the president’s commitments. They’re vowing to block America’s promised contribution — already whittled down to a puny $3 billion — to the Green Climate Fund for developing nations. They’re moving on several fronts, including the courts, to try and dismantle Obama’s EPA carbon initiative, the Clean Power Plan.

And, of course, blanket Republican opposition means that no treaty submitted by Obama would have any chance of winning Senate ratification. As a result, the Paris conference is forced to look for an agreement that doesn’t have the binding force of an international convention, unless it wants another document that’s binding on every country except the most powerful one, America. Thus the GOP manages to prevent the rest of humanity from seeking an optimal solution to its most urgent problem.

Reports from Paris say nobody at the conference is paying attention to GOP threats. Maybe that’s true. Either way, the Republican congressional leadership rewrote the rulebook this month. It’s transformed itself from a political party into a sub-state rogue actor that’s willing to take on the world.

How Republican Hate for Obama Is Burning Up the Planet