The Left’s Double Standard on ‘Tolerance’ 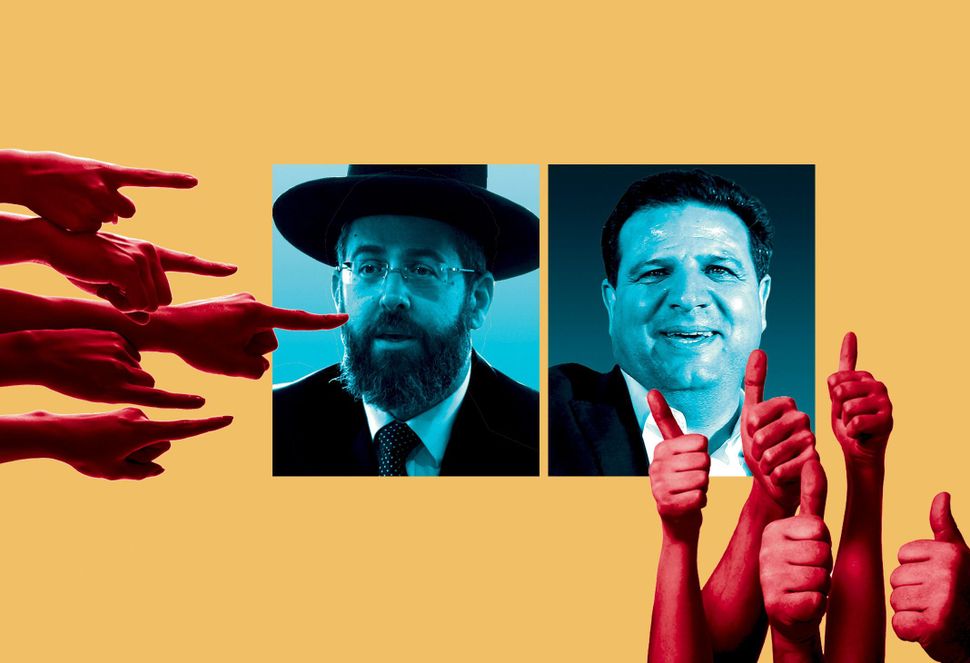 When is open dialogue prized, and when is it synonymous with capitulation?

Two disputes that happened within a day of each other highlighted that question along the deepest fault lines in modern Jewish life: the dispute over religious pluralism, and the relationship between Israeli Jews and their Arab neighbors.

On December 9, Israel’s Ashkenazi chief rabbi, David Lau, issued a blistering attack on Naftali Bennett for visiting a Conservative Jewish day school in Manhattan. Lau argued that by his visit, Bennett, chair of the Jewish Home party and an Orthodox Jew, legitimated a corruptive form of Judaism that “distances Jews from the path of the Jewish people” and is therefore forbidden.

On December 10, Ayman Odeh, the Arab-Israeli chair of the 13-member Joint List in the Knesset, refused to meet with a group of American Jewish leaders because the meeting was to be held in offices rented from the Jewish Agency for Israel, a quasi-governmental organization that Odeh contends displaced his people in the past and continues to discriminate today.

The outcry from the left against the chief rabbi’s remarks was immediate. The Forward published the heartfelt criticism of Lau’s first cousin, who is studying to become a Conservative rabbi, and an equally vigorous defense of the day school by an eighth-grader there.

See for yourself, they were saying. We are legitimate Jews, too. Only through personal engagement and open dialogue can we overcome our differences.

But for some on the left, the reaction to Odeh’s dispute with the Conference of Presidents of Major American Jewish Organizations emphasized the opposite. Also writing in the Forward, Mairav Zonszein said that Odeh was right not to set foot into a space that has anything to do with the Jewish Agency, because of its historic role in displacing the Palestinian people to further Zionist goals. Open dialogue and free speech, she argued, only go so far.

While this analogy isn’t perfect — no analogy is — it is revealing of what could charitably be called an inconsistency in the American Jewish left’s attitudes toward pluralism and tolerance. To wit: When Orthodox Jews shut out liberal denominations, they are accused of intolerance. But when Israeli Arabs and Palestinians allow the symbols of Zionism to prevent respectful dialogue with Jews, they are applauded.

Here I will acknowledge that I see no excuse for Lau’s disparagement of Bennett for simply visiting a Conservative school that has not brought physical harm to anyone, where I can comprehend that Odeh is making a historical claim of such harm on his people’s behalf. As I said, it’s not a perfect analogy.

The political/religious left is not alone in its inconsistent fealty toward open dialogue. In the past few years, the right has gotten particularly good at shifting the poles of the so-called Jewish tent to be able to declare all sorts of groups and views out of bounds. While a diverse array of Jewish representatives had gathered on December 10 to meet with Odeh, for instance, notably missing was the advocacy group J Street, which has been barred from membership in the Conference of Presidents even though it meets the criteria, advocates for a two-state solution and works against boycotts of Israel.

But the right doesn’t boast about its pluralistic values. The left does. The right prizes particularistic loyalty more than tolerance and acceptance. And so when the left’s noble values instead sound more like intolerance, the gap between beliefs and behaviors is more troubling.

Coincidentally, Odeh met with the Forward a few hours after the incident at the Jewish Agency office, and I had the opportunity to question his decision to walk out. He was adamant that he accepts a state of Israel alongside a state of Palestine, understands Jewish suffering, appreciates Jewish culture and, by the way, speaks an elegant Hebrew that is far more proficient than that spoken by most American Jews.

Still, he won’t accept Zionism that privileges Jewish ties to the land over Palestinian ties. And even though he is a member of the Israeli legislature, he and his Joint List colleagues won’t participate in the governmental work of the ministries of foreign affairs, security and absorption because of those agencies’ roles in foundational Zionism.

From there, it’s a direct but tenuous line to boycotting the Jewish Agency for its support of efforts that still today, Odeh contends, oppress the Arab minority.

The whole incident that day may have been the result of bad planning, a miscalculation by a freshman lawmaker unfamiliar with the byzantine political culture and sensitivities of America’s Jews. And, perhaps not incidentally, it may have shored up Odeh’s stature back home, where he faces the unenviable task of managing a faction of Arab politicians with members much less conciliatory toward Jews than he is.

But while I can appreciate the reasons, I can’t endorse them, and I can’t side with those who do. If the left can overcome symbolic hindrances when it comes to Orthodox versus Conservative Jews, why not do the same in the Israeli-Palestinian context?

It would be a tragedy if this one dispute overshadows all the goodwill generated by Odeh’s visit to the United States, and drowns out his plea not to overlook the desperate economic, social and political needs of Israel’s sizable Arab minority. I doubt that the chief rabbi will take up his cousin’s invitation to attend his ordination at the Jewish Theological Seminary next year, but there remains hope that Odeh’s leadership will elevate political discourse and shape real reforms in Israel.

But the very different reactions to these two incidents ought to be the cause of reflection and soul-searching on the left. If inconsistency leads to hypocrisy, then the moral ground is lost.

The Left’s Double Standard on ‘Tolerance’