A Muslim, a Jew and a Christian Walk Into a Texas Mosque… 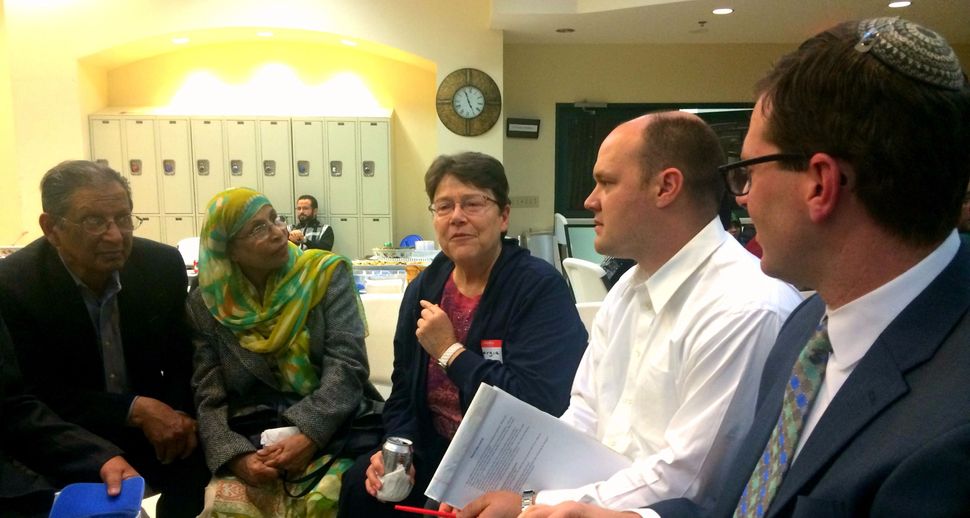 Like other liberal East Coasters with limited experience of Texas, I have tended to snidely dismiss the entire state as a jingoistic bastion of reaction. Yet a December 13 visit to Irving, a city of 232,000 abutting Dallas, forcefully reminded me that there is another Texas, at once religiously devout and deeply humane.

Amid an escalating drumbeat of anti-Muslim fervor in Irving — including Mayor Beth Van Duyne’s shrill evidence-free campaign claiming that a Muslim court is attempting to impose Sharia law, and a recent appearance outside the sprawling Islamic Center of Irving by a dozen burly men toting firearms and a large banner proclaiming “Stop the Islamization of America” — 200 Christians, Jews and Muslims gathered at ICI and appeared to turn down the temperature in the community with the simple act of sitting in small circles and holding heartfelt conversations.

The event, dubbed “One Irving for Us All: Through Different Faiths, Let’s Relate,” was co-sponsored by my own New York-based not-for profit agency, the , together with the anti-Islamophobia umbrella group Shoulder to Shoulder. Fifteen local churches, synagogues and mosques took part. Many participants, especially evangelical Christians, made clear that they disagree with their Muslim hosts on theological issues, but said that is all the more reason to befriend them and treat them kindly.

To be sure, not all Christians in the community share that enlightened viewpoint. The Rev. Dennis Webb, an African-American minister who serves on the Irving City Council and has publicly criticized Van Duyne for her anti-Muslim rhetoric, acknowledged that: “The reality is that there are plenty of people even in my own church who are afraid that God will strike them dead if they show up on these premises.”

Meanwhile, the palpable fear that many Muslims in the area feel for their physical safety, especially in the wake of the recent armed protests outside ICI and another nearby mosque, was never far from the surface. Rafiza Chowdhury, an ICI member who wears a hijab, commented: “Frankly, these days I am scared that something nasty could happen the next time I go shopping at Wal-Mart. Yet I realize that many of my non-Muslim neighbors are scared as well, frightened of the sinister image of the ‘Muslim next door’ being propagated in the media.”

ICI’s Imam Zia ul-Haque Sheikh, who invited leaders of the attending Jewish and Christian congregations to join in the creation of a new Irving Interfaith Council, had this message for non-Muslims: “Don’t fear Muslims, but instead make an effort to get to know your Muslim neighbors. It is the people who have never met a Muslim who are protesting outside our mosque with guns.”

Some attending the ICI event acknowledged that it is their very discomfort with Islam that drew them there. Frank Braganier, a Christian Irving resident in his 70s who said he was visiting a mosque for the first time, got into an intense discussion with an ICI member named Rashid, who came to Texas from Somalia as a political asylum seeker. Addressing Rashid, Braganier said, “While I am relieved to feel welcome and safe here today, I remain concerned that other Muslims who are coming to America want to put their laws above the U.S. Constitution, and that some, like the couple in San Bernardino, are prepared to commit mass murder in the name of Islam.”

“It is a complete distortion that Muslims are trying to put Sharia above American law,” Rashid responded. “The vast majority of American Muslims totally reject violence in the name of Islam. I myself am enormously grateful to America for giving me refuge and a chance to succeed in life. I have been here for 20 years and my only transgression was one speeding ticket.”

Listening to that exchange, it seemed to me that Rashid had touched Braganier with his palpable love for America and caused Braganier to rethink the canard that American Muslims are trying to impose Islamic law. I jumped into the conversation to emphasize that the savage behavior of the Islamic State group and its acolytes (including the couple in San Bernardino) runs completely counter to the precepts of the Quran, which, like the Talmud, affirms: “If anyone killed a person, it would be as if he killed the whole of mankind.” Yet, I reflected, the hard reality is that neither Rashid nor Imam Zia nor allies of the American Muslim community like myself can guarantee that tomorrow will not see a new massacre of innocents at the hands of another fanatic claiming that his motivation came from the Quran.

Unfortunately, it is the vast majority of peaceful American Muslims who are the most vulnerable to retaliation, whether in the form of Donald Trump’s proposed Muslim travel ban or actual acts of violence. Still, it was heartening that most non-Muslim attendees at ICI showed a keen desire to prevent innocent Muslims from being wrongfully victimized by vigilantism.

In that vein, Rabbi Michael Kushnick of Congregation Anshai Torah, who made the trip to Irving from Plano on the other side of Greater Dallas together with several congregants, drew strong applause when he said, “We Jews know what it is like to be persecuted, so I challenge the Jewish community of North Texas to stand up and speak out for the right of all faiths to practice their religions freely and without fear.” Noting that he recently accepted an invitation to speak at the Friday afternoon prayer service at a nearby mosque, Kushnick said, “The key thing is that we need to open our congregational doors and get people of other faiths inside our buildings.”

But is that enough? Bee Moorhead, executive director of Texas Impact, a statewide grassroots network that lobbies on behalf of religious freedom and social justice, contended that while the encounter at ICI had opened important channels of communication, direct political action will also be needed to counter the roiling Islamophobia in the Irving City Council and Texas State Legislature, where an anti-Sharia bill is considered likely to pass in the coming legislative session. “Events at which Christians and Jews come to a mosque to say ‘We stand with you’ are fine, but what we really need now is to show legislators that they will suffer electoral consequences if they continue to go in the present ugly direction,” Moorhead said.

Although there are no quick fixes or easy answers, I found myself feeling inspired by the spiritual energy and sheer human decency of many of the people I encountered. At a dangerous historical moment defined by ghastly acts of terror and demagogic calls to crack down on all Muslims, my day in Irving left me with the hope and conviction that all is not lost if people of diverse faiths and ethnicities can put aside fear and come together to build ties of communication and cooperation.

Walter Ruby is the Muslim-Jewish Program Director of the Foundation for Ethnic Understanding.

A Muslim, a Jew and a Christian Walk Into a Texas Mosque…