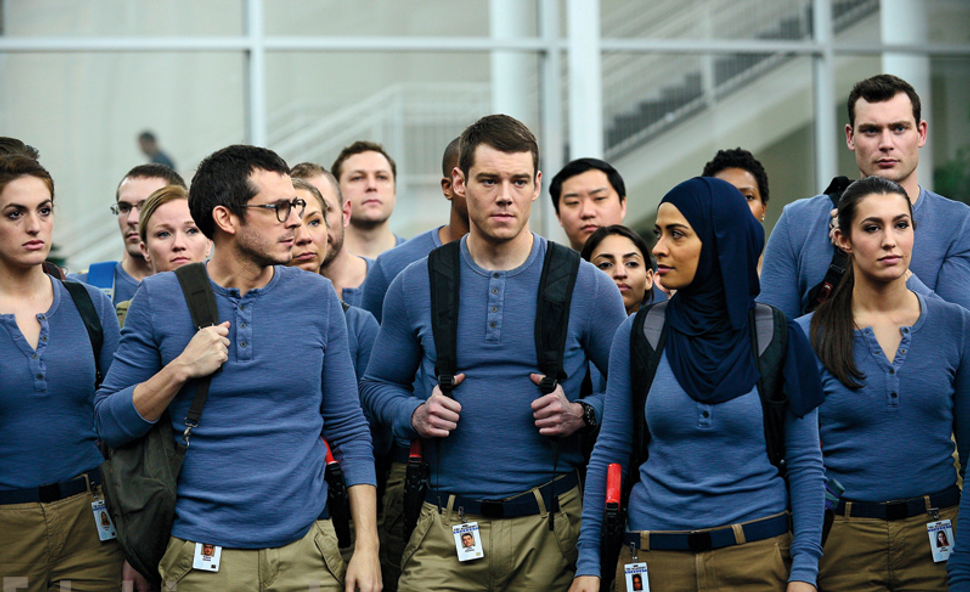 Earlier this year, the only show to catch my eye amid the lackluster Fall 2015 television season was ABC’s “Quantico.” Marketed as Grey’s Anatomy-meets-the-FBI, the hour-long soapy delight captured my attention largely because it features a non-white female lead (Bollywood star Priyanka Chopra) with an ensemble cast that sports a hodgepodge of gender and racial representation. Among them, one particular character intrigued me: Simon Asher (played by Tate Ellington), a gay Jewish self-proclaimed Zionist.

“Quantico” revolves around a terrorist attack that results in the devastating bombing of Grand Central Station, which one of the mainstay new agent trainees (NATs) is assumed to be responsible for; it unveils which NAT is the de facto culprit episode by episode. I assumed that Simon’s politics would somehow come into play. My particular investment in Simon also rested on a personal foundation: Being a queer Conservative Jew who has expressed a progressive, liberal identification with Zionism — a person who, like Simon, also wholly supports a two-state solution — I was flabbergasted to see a character on national network television that, in a way, was my fictive reflection.

But in the end, my assumption was correct, in a way that reminds me you should always word your wishes carefully: Simon’s eventual characterization proved to resemble a grotesque reflection of myself in a fun house mirror.

As we, the “Quantico” audience, learned more and more about our NATs, we also became privy to Simon’s true motivations, his true identity and, most importantly, a lack of authorial grip on the insidious heritage of damaging anti-Semitic tropes — all put to work for the sake of a shoddily executed storyline. And while Simon didn’t turn out to be the terrorist after all, the road to this revelation was paved with much more than dormant, passive anti-Semitic burlesque.

Early on in the plot, it becomes apparent that Simon is in fact not gay, which was itself an insult to queer viewers. We’re given to understand that his identifying as gay is a way to emphasize his desperate desire to become someone else in the shadow of his checkered past with the IDF (which he also covers up, initially stating that his time in Israel was spent as a pro-Palestinian activist). Simon’s “love interest,” a gay Behavioral Analysis Unit NAT named Elias (Rick Cosnett), calls him out on his appropriation of a second-class identity. Still, the show never recovers from the fact that it positioned the LGBT community, or queerness in general, as a hallmark of privilege. That mistake acts as a harbinger for the show’s inability to maturely articulate the delicate nature of identity politics and representation. It betrays the writers’ inability to comprehend the consequences of sacrificing moral integrity for (overwrought, underwritten) plot.

It’s important to note that anti-Zionism and anti-Semitism are two different entities — yet the “Quantico” writers conflate both in Simon’s plotline. His quasi-terrorist colleague and ex-IDF bomb expert is portrayed as an ultra-Orthodox Jew, exacerbating the idea that his otherness is enmeshed with his inherent Jewishness, and enforcing the sense that “Jew” is synonymous with “antagonist” or, even worse, that Jewishness is the epitome of evil. Almost as bad is the writers’ shoddy research: Apparently, no one bothered to inform them that the Mossad — or its counterterrorist unit, Kidon — is not the same thing as the IDF.

Although you might be tempted to counter that Simon’s two-faced nature is on a par with his fellow NATs’ — all of them have dangerous, tragic or even deadly secrets — you shouldn’t; it would betray a serious insensitivity to history to dismiss the show’s treatment of its sole Jewish character. The character’s double-dealing and deceitful habits are the latest iteration of a tradition that delights in depicting Uriah Heeps, Fagins and Shylocks in terms of anti-Semitic canards and pogrom-inciting blood libels. The character of Simon is a modernized manifestation of “Jewface,” a shameful rendering of a caricaturized Jewish figure.

If anything, the latent bigotry of “Quantico” is all-encompassing; the show touts Islamophobic sentiments to match those bandied about concerning Jews. Simon’s romantic interest is none other than Nimah Amin (Yasmine Al Massri), a patriotic conservative Muslim with pro-Palestinian sentiments. The show’s decision to go this route after Simon’s “de-gaying” might have been a redemptive coup-de-grace, but instead it’s ruined by a cartoonish rendering of Islam, as well as a propensity to attempt to vilify every brown or black person in sight (Chopra’s character Alex Parrish, Alex’s mother, Nimah and her twin Raina, and another white character’s Saudi Arabian half-sister are all considered possible terrorists at one point or another, making up roughly half of the suspect pool). As Brown Girl Magazine pointed out, this is a cog in the well-oiled anti-Muslim machine, a “sensationalized brand of fear mongering that has contributed to the cancerous Islamophobia that has permeated the American perception [of Islamic culture and religion].”

What makes everything worse is a two-pronged revelation: After being kicked out of the NAT program, Simon, along with his Hasidic associate, do indeed create a step-by-step blueprint to destroy Grand Central in a fit of revenge (cue Shylock’s “pound of flesh” quote and pair it with a shaking, raised fist), but they never end up executing it. Then we find out that Elias was the real terrorist all along, making an uncomfortable undercurrent into an overarching message: Don’t trust anyone who is “other,” like the Jew or the homosexual, because each have an inherently two-faced, surreptitious and cunning nature.

In the end, the authorial laziness of shows like “Quantico” is an indicator of something greater: a creeping sense that we are not as far from the days of Shylock and Fagin as we’d like to believe.