You Think the World Is Going to Hell in 2016? It’s Actually Getting Better. 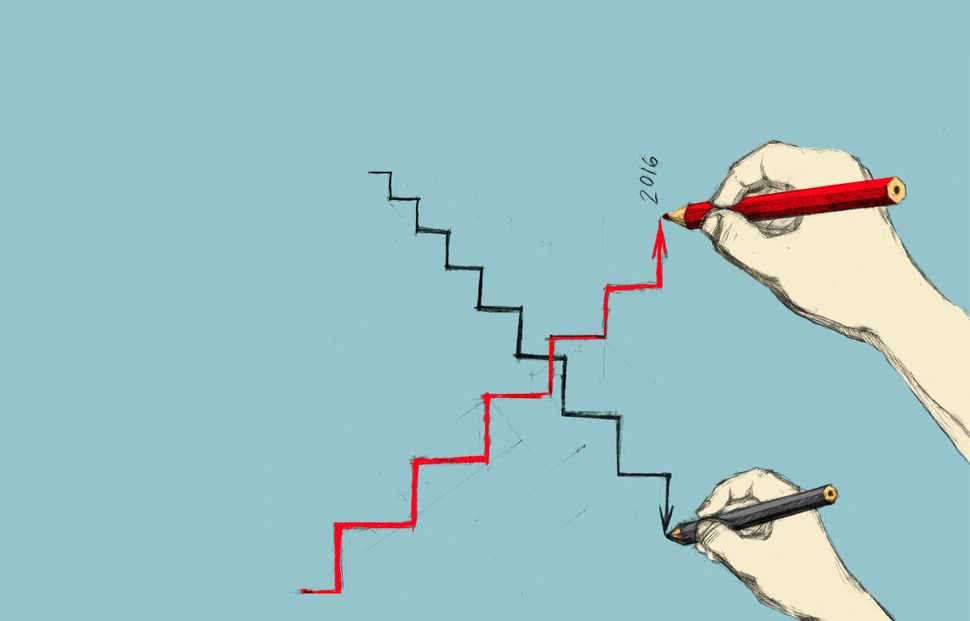 It’s 2016, and on the right and the left, it’s the worst of times. Conservatives see moral decay, loss of American leadership, the dangers of radical Islam. Liberals see environmental catastrophe, the persistence of racism, corporate control of politics, and the wealth gap. Either way, we’re going to hell in a handbasket.

In fact, no. Not by objective measures, anyway. And failure to recognize that isn’t just pessimistic; it’s dangerous.

Sure, pessimism has a strong Jewish pedigree. In addition to the centuries of fatalistic Jewish jokes, the principle of yeridat hadorot, the “descent of the generations,” has been with us for, well, generations. Our ancestors were better than we are, the rabbis tell us. And after Auschwitz, to believe otherwise seems foolish.

And yet, these are the best of times, not the worst.

Second, as described in 800 pages of detail by Steven Pinker, in his bestseller The Better Angels of our Nature, violence of all kinds has declined, more or less steadily, for centuries. Much of Pinker’s data is on the macro level: the shift from hunter/gatherer to agricultural societies, for example, which led to a fivefold decrease in rates of violent death.

But other data is more relatable. Between the Middle Ages and the late 20th century, European countries saw more than a 90% decrease in homicide rates. The 17th and 18th centuries saw the abolition of slavery, torture and earlier forms of monarchic despotism.

And since World War II, despite the barrage of media attention to war, we have been in a period historians call the “Long Peace.” Neil Halloran’s stunning, 18-minute graphical presentation of the casualties of World War II makes this abundantly clear. Counting civilians and soldiers, 70 million people died in World War II. Since then? By far the largest deaths from violence have been at the hands of domestic tyrants: 40 million under Mao, 20 million under Stalin.
But the largest 44 economies have not fought each other in 70 years. About 9 million have died in all wars put together. Despite the horrors we hear about every day, the world is mostly at peace.

Moreover, it is only in the last half century or so that societies have seriously considered human rights, civil rights for minorities (ethnic, racial, sexual, age and gender), animal and environmental justice, and the Western social welfare state that guarantees a basic subsistence level of health and security.

ISIS looks barbaric today, but it would hardly seem unusual even a century ago. To liberals, shredding the social safety net and enriching the plutocracy is indeed outrageous, but it pales in comparison to how things were in Europe for a thousand years. And to conservatives, Obamacare may smack of socialism, but contemporary government is nothing compared to centuries of European despotism and absolute authority — let alone the fascist regimes to which it is outrageously and offensively compared.

So too for exceptionally horrific acts like the rape of women in wartime, child warriors, callous deaths of the underprivileged. These were always horrific, but the point is, they didn’t used to be exceptions.

Nor is it the case that contemporary violence reveals an intractably vicious human nature. In fact, human evolution is marked as much by cooperation as by competition, and as French Buddhist monk Matthieu Ricard has demonstrated in his own 800-page tome, altruism is wired into our brains. Humans are often altruistic when it benefits the group, even if individuals sacrifice their own wellbeing. Soldiers serving their countries, citizens making do with less so that others can thrive — these are not aberrations, but as intrinsic to human nature as greed, hatred and delusion.

Finally, it is simply not the case that the U.S. is living in a world full of existential threats. Ask Israel what that’s like. Of course, Americans face threats of terrorism, even mass terrorism. But no one, certainly not Islamist radicals, or Russia, or China, really threatens our very existence, or even our security on a mass level. This is not to minimize the horror of acts of terrorism, of course, only to note that our basic national security is not at risk. We are, by far, the strongest and most secure country in the world.

Perhaps the one exception to all of this is global climate change, which has already contributed to the largest refugee crisis of recent times. If pessimistic climate change predictions come true, we will indeed face a cataclysm of unprecedented proportions, involving massive food system failures, inundation of coastal cities, and disruptions in basic infrastructure. We will adapt, and survive, but if the pessimistic models come to pass, life will certainly get worse.

Apart from climate change, however, these are not the worst of times; they are, for all their horrors and flaws, the best.

All this confusion matters. Not only do we take for granted the blessings of everyday life, making everyone miserable, but fear tilts us toward reactivity and prejudice. On the right, Donald Trump blames Muslims and Mexicans, tapping into deep-seated fears regarding insecurity and the loss of white hegemony. Right-leaning Jews push Israel toward ever-more-suicidal policies, motivated by their own fears and traumas. Fear makes for bad policy.

And on the left, fear neutralizes political activism, pushing liberals to tune out, drop out or believe that only revolutionary change will make any difference. Fear also leads to stupid views, like blaming the Federal Reserve for inequality, or believing that my own behavior, rather than systemic change, is what matters when it comes to climate change.

And, as Brown University fellow Stephen Kinzer wrote in the Boston Globe last spring, “Promoting the image of a world full of enemies creates a ‘security psychosis’ that misshapes our view of the world. It tempts us to interpret defensive steps taken by other countries as threatening. In extreme cases, it pushes us into wars aimed at preempting threats that do not actually exist.”

Mostly, though, the belief that things are getting worse and worse tilts us in the direction of reactionary conservatism. Not neo-conservatism based on economic theory or Israel-conservatism based on hawkish foreign policy views — those are legitimate political positions, of course — but reactive, reactionary revanchism. “Make America Great Again” — like it was, when, exactly? When women, Jews, immigrants, gays and African Americans were second-class citizens? When we all lived in a Christian Nation? Or perhaps before modern medicine, before the Internet, before human rights evolved as an international norm?

Such selective past utopias favor those who are doing the dreaming. More than that: they favor the dreamers’ dreams (and nightmares) rather than their rational faculties. Wake up. Visit a hospital, or a war memorial, or imagine what it was like to be a slave, or a Jew in 18th century Europe. Focus on reality, not fantasy, because that’s the only way to help make it better.

You Think the World Is Going to Hell in 2016? It’s Actually Getting Better.