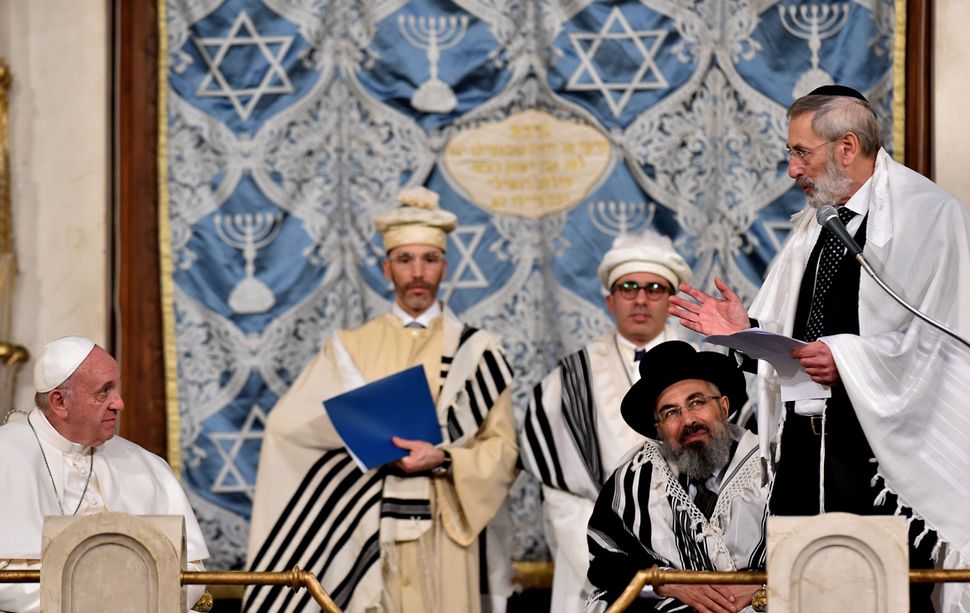 In 1986, Pope John Paul II made history by paying a visit to Rome’s Great Synagogue.

In 2016, Pope Francis visited for the third time.

As our ancient rabbis were fond of saying — and as Rome’s current chief rabbi Riccardo Di Segni pointed out during the papal visit on Sunday — an act repeated three times becomes a hazaqa, a fixed habit.

But just because Pope Francis’s visit shows his desire to continue on the conciliatory path set forth by the Catholic Church decades ago, that does not mean we should take his gesture for granted.

As an Italian Jew whose grandparents came here when they were vulnerable political refugees fleeing Rumania in the 1950s, I certainly don’t. And I believe that my fellow Roman Jews don’t either. The pope’s gesture has a very concrete meaning for us, engraved in the memories of the people who still live, and nowadays also thrive, on the very same streets where their ancestors were cruelly persecuted and often pressured or forced to convert.

As a matter of fact, I believe that if you want to understand the meaning of Pope Francis’s visit (as well as his predecessors’), there is no better way to do it than by looking at the geography of Rome. 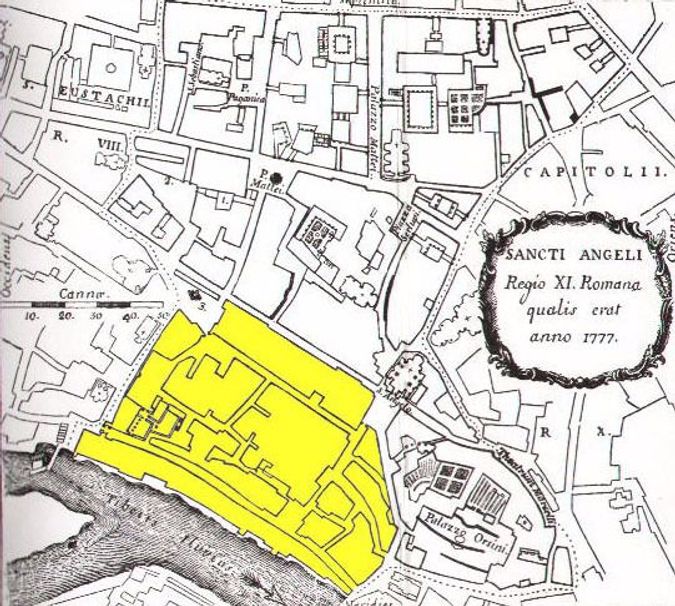 Tight Quarters: A map shows the extent of Rome's Jewish Ghetto in 1777. Image by Wikipedia

Less than two miles separate the Vatican from the Great Synagogue, which is located where the Jewish Ghetto stood for over three centuries. In 1555, the pope established the Ghetto on the opposite bank of the Tiber River, in one of the most dangerous and insalubrious areas of the city. There, Roman Jews lived in inhumane conditions. They were forced to attend weekly sermons in church, subjected to periodical rites of humiliation, and banned from most professions, until the newborn kingdom of Italy conquered Rome in 1870.

The very same neighborhood today constitutes the pulsing heart of Roman Jewish life. It features kosher restaurants, Jewish shops, the community day school and offices, plus the Great Synagogue itself, which was built between 1901 and 1904 to celebrate the emancipation that had at last been achieved.

And yet, the ancient Ghetto is also the same area where the Jews of Rome were arrested, then sent to Auschwitz by the Nazi fascists during the infamous raid of October 16, 1943. And it’s where a Palestinian commando carried out a terror attack on October 9, 1982, at the end of the service of the Jewish holiday of Shemini Atzeret, murdering a two-year-old boy, Stefano Gaj Tachè, and leaving dozens injured.

That’s why, in those few square miles, every reference to fighting anti-Semitism and hate is not to be taken lightly. This includes the fight against the anti-Semitism rooted in Christian theology — especially considering that (despite improvement from the days of forced conversions) religious prejudice toward Jews is still present in the most traditional and least educated segments of the population.

And that’s why the message of Pope Francis, who spoke about rejecting anti-Semitism in every form, who reiterated the irrevocability of the covenant between God and the Jewish people, who paid tribute to the victims of the Holocaust and to the survivors who attended the visit, cannot be underestimated. 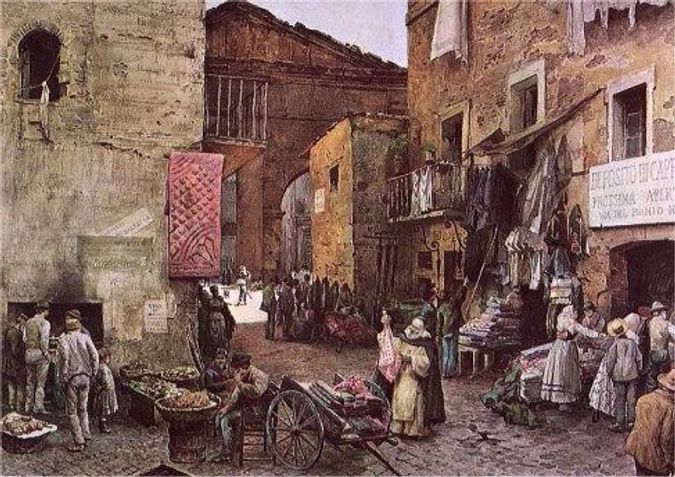 Bleak Times: Via Rua in Rome's Jewish Ghetto, as depicted by Ettore Roesler Franz, circa 1880. Image by Wikipedia

This message comes on the heels of decades of improved Catholic-Jewish relations. In the past 50 years, since the promulgation of “Nostra Aetate,” the declaration that marked the first significant move toward reassessing the Church’s hitherto-contemptuous approach to Judaism, many significant steps have been taken. The most recent one is the document issued by the Pontifical Commission for Religious Relations with Jews last December, explicitly stating that Jews do not need to believe in Jesus to obtain salvation. It’s a far cry from the days when the nuns used to warn my dad at summer camp that he was bound to go to hell if he didn’t embrace Jesus as his Lord and Savior.

That’s not to say that there aren’t still challenges to be overcome. The pope’s take on the state of Israel is an especially sensitive issue for the proudly Zionist Italian Jewish community. During his visit to the synagogue, Pope Francis didn’t call the Jewish state by its official name; instead, he chose to refer to it as the “Holy Land” in the passage of the speech where he invoked the necessity of praying to God “to help us in applying the logic of peace, reconciliation, forgiveness and life in Europe, the Holy Land, the Middle East, Africa.”

Despite the unanimous applause that greeted the pope’s address, this choice of language didn’t go unnoticed.

“There is still a long way to come,” as Di Segni stressed in an interview with the Italian Jewish newspaper Pagine Ebraiche hours before the papal visit. But after Sunday, there is a little more trust that the people from both banks of the Tiber can walk on it together.

Rossella Tercatin is an Italian journalist.