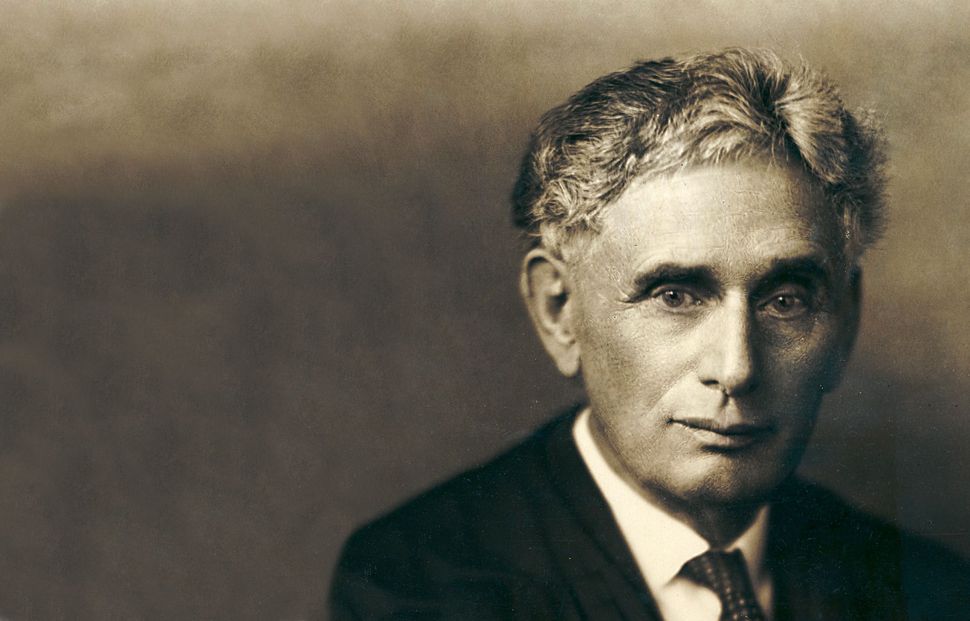 “Louis D. Brandeis, the first Jew nominated by President Wilson to the Supreme Court of the United States,” the “magic bulletin board” outside the Forward building on the Lower East Side of Manhattan announced in Yiddish on Friday, January 28, 1916.

“God be blest!” an onlooker quoted by the New-York Tribune responded. “In Russia we dreamed of it. Here it is a fact.”

The Brandeis nomination was a clear watershed moment for American Jews — but, paradoxically, it seemed to do nothing at all to lessen this country’s anti-Semitism. Now that we are marking its 100th anniversary, we may be better placed to ask: What were its long-term effects? Did it change nothing — or everything?

In its day, the nomination must have felt like something of an “Obama moment” for American Jews, a can-you-believe-this-happened event that would transform their status and image. Building on the 1906 appointment of Oscar Straus as the first Jewish Secretary of Commerce and Labor, it suggested that faith-based discrimination against Jews was ebbing. Judge Mayer Sulzberger of Philadelphia, himself a noted jurist and Jewish leader, made this clear to The Washington Post when the appointment was announced. The nomination, he explained, showed “that President Wilson does not consider creed or nationality when selecting men for great positions and high public office.”

Ironically, Wilson did consider race when selecting candidates for government positions. As the Black Lives Matter movement recently reminded us, Wilson brought back segregation to departments of the executive branch that had previously been integrated, and declared that “segregation is not a humiliation but a benefit” for black Americans. He was an avowed racist.

When it came to Jews, though, Wilson expressed nothing but admiration. Besides Brandeis, he befriended a slew of Jews, including Rabbi Stephen S. Wise and financier Jacob Schiff. He pledged support for the aims of the Zionist movement. In 1917 he would endorse the Balfour Declaration that viewed with favor “the establishment in Palestine of a national home for the Jewish people.” Perhaps for this reason, Wilson has long been praised as a liberal progressive hero in Jewish history books but villainized as a wicked Southern racist in African-American ones.

The nomination of Brandeis set off a firestorm in Washington. Given his Elizabeth Warren-like attacks on big business, his ardent support for Progressivism, and his insistence that the “living law” needed to conform to contemporary conceptions of social justice, he had acquired many enemies in conservative circles. The fact that he was a Jew did not help either. It alienated him still further from those who viewed the Supreme Court as the ultimate protector of traditional values and property rights.

The extent to which anti-Semitism underlay opposition to the Brandeis nomination has long been debated. Some of Brandeis’s prime antagonists, like Harvard University’s president A. Lawrence Lowell, were known to be avowed nativists who practiced social discrimination against Jews and sought to limit their immigration. Some 55 nervous New Englanders — people bearing such prominent family names as Adams, Sargent, Gardner, Grew, Peabody, Thorndike, Bowditch, Putnam, Shattuck and Coolidge, as well as Lowell — signed a well-publicized petition charging that Brandeis lacked “the judicial temperament and capacity which should be required in a judge of the Supreme Court.” Many of these same pedigreed people belonged to the Immigration Restriction League of Boston. In those circles, historian Barbara Miller Solomon showed, “prejudice against the country’s latecomers had become habitual.”

On the other hand, the issue of religion never significantly came up in the Senate confirmation hearings concerning the Brandeis nomination. The 43 witnesses called to testify focused instead on controversial aspects of his career as a lawyer, and on his supposedly “radical” views. That may well have been by design. Manifestations of anti-Semitism in America more commonly found expression in private rather than in public. While some insisted that “the Jew in Brandeis has nothing to do…with the grounds of opposition,” it seems more likely, as Melvin I. Urofsky, the recent biographer of Brandeis, concludes, that “Brandeis’s religion constituted but another marker of his ‘outsider’ status and, as with his alleged radicalism, made him [in the eyes of his opponents] unfit to enter the temple of the law.”

Two months of acrimonious hearings, two months of Judiciary Committee delays, and long hours of backroom politics orchestrated in part by Wilson ended on May 24 with a committee vote that followed straight party lines: Ten Democrats favored the nomination of Brandeis and eight Republicans opposed it. On June 1, the Democratically controlled Senate followed the recommendation of its Judiciary Committee, confirming Brandeis by a vote of 47-22. He was sworn into office four days later by Chief Justice Edward D. White.

Yet, Brandeis’s elevation to the court, contrary to the hopes of Jews like Sulzberger, did nothing in the short run to alleviate American anti-Semitism. In fact, discrimination against Jews only increased in the years following his ascension to the bench. Lowell, who never reconciled to Brandeis, encouraged that trend. His well-publicized campaign to limit the number of Jews at Harvard helped to legitimate similar anti-Jewish quotas across the country, beginning in the 1920s.

In the long run, though, the presence of Brandeis on the Supreme Court did much to combat anti-Semitism. The presence on today’s Supreme Court of no fewer than three Jewish justices — Ruth Bader Ginsburg, Stephen Breyer and Elena Kagan — amply testifies to the magnitude of the change.

The centennial of Brandeis’s nomination likewise serves as a reminder that the impact of “Obama moments” may not be measurable in years. Sometimes it takes a full century to appreciate their profound historic significance.