Does God Still Matter on the Campaign Trail — Even When Young Voters Rebel? 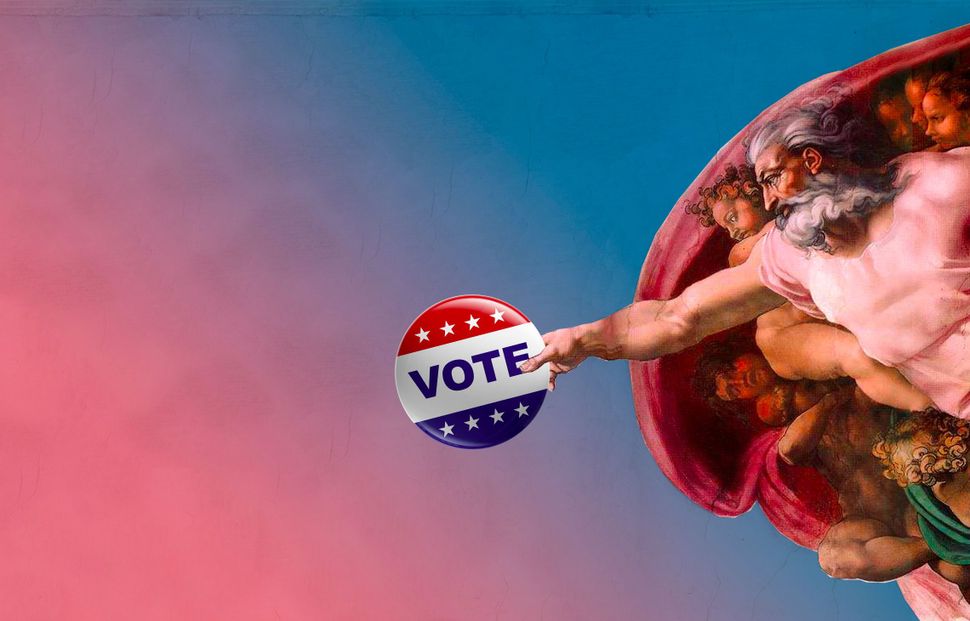 The two Republican candidates with the most momentum going into the New Hampshire primary are eager to bring God with them on the campaign trail.

There’s Ted Cruz, who is the son of an evangelical preacher and often sounds like one himself, opening his victory speech in Iowa with “To God Be the Glory!” and emphasizing that our civil rights come not from the government or the Constitution but from “our Creator.”

And there’s Marco Rubio, a devout Catholic who has cycled through Mormonism and flirted with Southern Baptism, and who says that you can’t really understand America if you don’t understand people like him — people for whom faith is “the single biggest influence” in their lives.

That is true. Compared with other Western democracies, we are a faith-drenched country. Americans say they go to church with enormous frequency and are distinctly comfortable with public expressions of religious fealty, putting God on dollar bills and in the Pledge of Allegiance.

But this is also true: You can’t really understand the new America unless you understand people who don’t care much about religion, theirs or anyone else’s. And there are more of these religiously unaffiliated — the so-called “nones” — each year.

Within the Jewish community, this trend is pronounced and, for many, deeply worrying, as the unaffiliated exhibit little attachment to the practice of Judaism and the State of Israel, are less likely to marry other Jews and feel obligated to keep Jewish tradition alive. The anxious reaction to the 2013 Pew Research Center survey confirming these attitudes and behaviors still echoes today.

What we haven’t seen in the broader American context, however, is evidence that the rise of the “nones” will have a political impact and alter the expectations voters have of candidates for high public office. That is, until this year.

The durable popularity of Democrat Bernie Sanders, a secular Jew who eschews faith talk and admits that he is not active in organized religion, is challenging that conventional wisdom. So is the unpredictable support for the onetime Republican front-runner Donald Trump, who is widely considered not religious even by members of his own party who favor him.

And time could well be on the side of the “nones.” As the percentage of Americans who identify as Christians decreases, the number who say they are religiously unaffiliated now approaches 23%, jumping six points in less than a decade.

Being an atheist is still one of the biggest perceived obstacles to the White House. A Pew survey released late in January showed that 51% of adults said they would be less likely to vote for a presidential candidate who does not believe in God; 6% said they’d be more likely, and 41% said it wouldn’t matter.

Dig deeper, as the Forward asked Pew to do, and what may seem intuitive is borne out in the data: The younger you are, the less you care about a candidate’s faith. Among those aged 65 and older, two-thirds were less likely to support an atheist, and only 28% said it wouldn’t matter. Among adults under 30, the numbers were nearly reversed: 34% were less likely to support an atheist, while 59% said it wouldn’t matter. 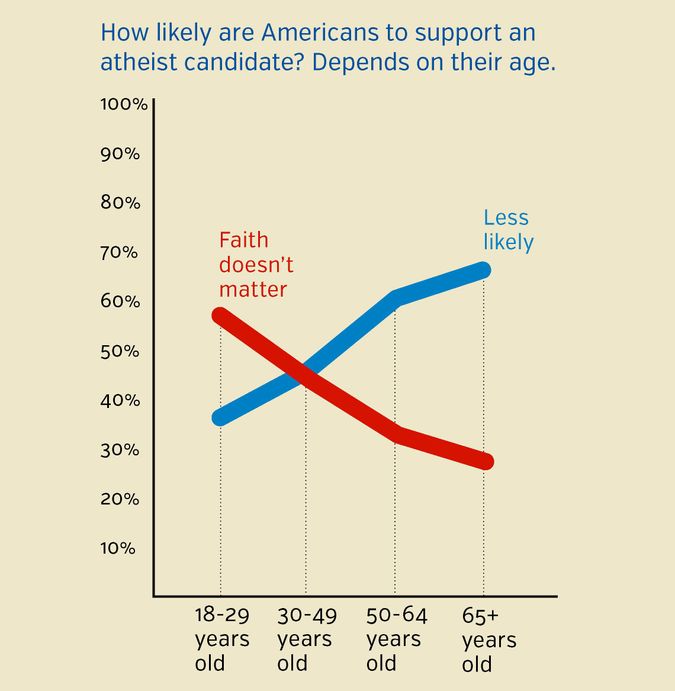 If these trends continue, the public’s expectation that a president must drag his family to church every Sunday in front of the cameras will not hold in the future. And there’s reason to believe the trends will continue. Sanders won 84% of the youth vote in the Iowa caucuses, far more than Barack Obama won in 2008. On the Republican side, the two most religiously unaffiliated candidates — Trump and Rand Paul — pulled in a combined 34% of those under 30.

“Young people are increasingly unaffiliated with institutional religion, and institutional politics as well,” reported Kei Kawashima-Ginsberg, director of the Center for Information and Research on Civic Learning & Engagement at Tufts University. These young adults are not so much disavowing faith as expressing it through a set of convictions founded on equity, she observes.

While you might expect this youthful independence to fade with age, Kawashima-Ginsberg cites research showing that the oldest millennials, those around 30 years old, who reached electoral awareness during Obama’s first run, are maintaining their liberal tendencies.

The absence of talk about God and faith in Sanders’s campaign is only one factor in his popularity among younger voters. His disinterest in religion may be unusual in comparison with other candidates’ views, but it feels right at home for most Jews in America, where a secular personality has flourished and Judaism is more often expressed in terms of ethical values and that overused phrase, tikkun olam.

But Sanders’s acceptance, and even Trump’s, is also part of a larger, more hopeful narrative of expanding pluralism: John Kennedy, the first Catholic elected president; Joe Lieberman, the first Jew on a national ticket; Mitt Romney, the first Mormon to lead his party, and, let’s not forget, Hillary Clinton, the first woman to win the Iowa caucuses (sort of). That pluralism allows candidates and office holders to exude deep expressions of Christian faith — exemplified so movingly by Obama’s eulogy last year for the churchgoers killed in Charleston, South Carolina — but also to decline any expression at all.

So rather than shudder at the particularistic patter from certain leading Republicans, let’s applaud where we might be headed as a nation, led by the unlikeliest and newest of voters who are less concerned about professions of faith and more impressed by what lies beneath.

Does God Still Matter on the Campaign Trail — Even When Young Voters Rebel?