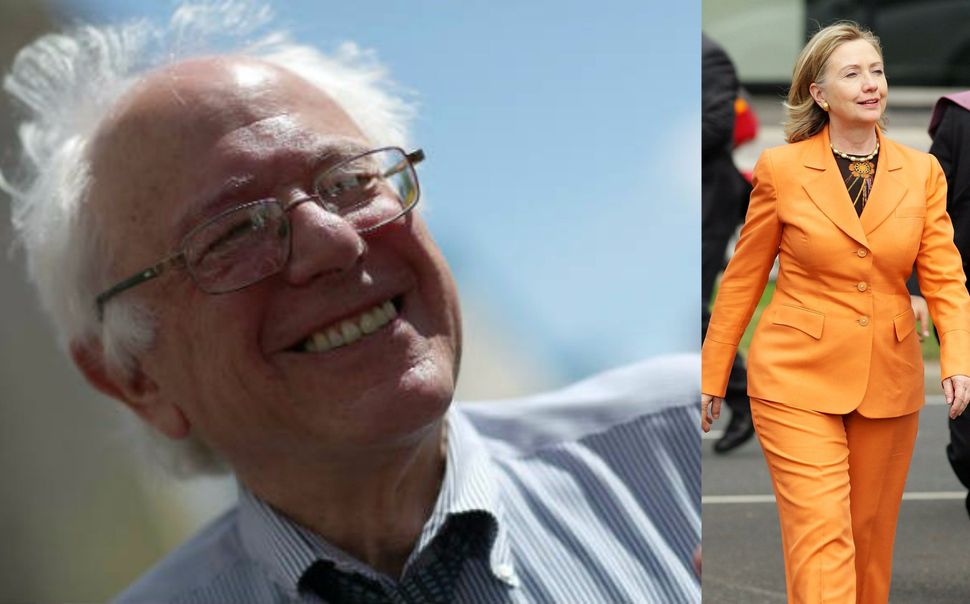 Looking back at some of Hollywood’s presidents, I am struck by one thing: They look presidential. Yes, they have the benefit of having hair and makeup to keep up their appearances. But all that aside, great care has gone into upholding a presidential look.

Interestingly, much has been written over the years about Hillary Clinton and her appearance. Now that she is a top presidential candidate, the interest has increased. Her hair. Her outfits. Her accessories. All of it has been fodder for the media. Critical fodder, I might add. And she can’t win. She wears pantsuits and is called out for dressing too masculine. She wears a skirt and gets flack for that choice. Her pantsuits are in a wide variety of hues? Too frivolous. She goes for a more neutral palette and the media says she’s trying too hard to look like one of the boys.

Bernie Sanders, on the other hand, does not seem to be interested in his appearance, and neither is the media. Sure, there are throwaway comments about it, but in no way do they compare with the quantity of articles written about Clinton and her appearance. In fact, many commentaries have noted that Sanders’s lack of attention to his appearance is congruent with his out-of-the-box political leanings.

Why is there such intense scrutiny with one candidate and not the other?

Somehow, with the abundance of articles about the upcoming election, I missed the announcement that Sanders fathered a child out of wedlock. Apparently between marriage #1 and marriage #2, Sanders was in a two-year relationship with a woman who gave birth to his son, Levi.

The reason, by the way, that I was unaware of the timing of Levi Sanders’s birth and his parentage, is because it received little press attention. Which, by the way, is as it should be. This is a private family matter. I, for one, do not believe that this has any bearing on Sanders as the potential leader of the free world, and it does not influence my opinion of him one way or another.

I cannot imagine that there would be such a dearth of attention if Clinton were the one who had borne a child out of wedlock. In fact, the media and political pundits would have a field day with what they might describe as a moral failing or even insidious behavior.

If there’s a gender-based double standard when it comes to our presidential candidates, it isn’t limited to the Democratic Party.

Donald Trump has some crazy-looking hair. It’s been parodied on SNL and the internet is rife with memes. But there doesn’t seem to be the same vitriolic outpouring that accompanies articles about Clinton’s looks.

Speaking of children born out of wedlock, Trump has one of those as well. After his relationship with Marla Maples contributed to the break-up of his marriage to Ivana Trump (wife #1), Marla bore him a daughter. They subsequently married and, later, divorced. And he, of course, went on to marry for a third time. I have yet to read one article questioning his “family values.”

The press has not been so forgiving with Governor Sarah Palin and her family. Their choices and behaviors been scrutinized, satirized and condemned all across the internet. While it has been suggested that much of the criticism is well-deserved given that Palin often speaks about the need for strong family values, I submit that the ferocity coming from the media is influenced by gender.

This is not my typical purview. I am not one of “those” women, seeing misogyny lurking around every corner. I do not feel that a candidate’s gender is reason enough for my vote. (By the way, I don’t feel that a candidate’s religion is reason enough for my vote, either.) But I can’t help noticing that we’re lacking any parity in the way male and female candidates are scrutinized.

How is it possible that in 2016 women are still being held to a different set of expectations? Should we not desire the same things from all candidates regardless of gender? If we are to criticize the appearance of a female candidate, ought we not pay the same attention to a male candidate? Or, dare I suggest, might we actually focus our consideration on whose policies best align with our own?

Rebecca Einstein Schorr is a CLAL Rabbis Without Borders fellow and a contributing author at Kveller.com