How Will Antonin Scalia’s Death Affect 2 Cases of Jewish Interest? 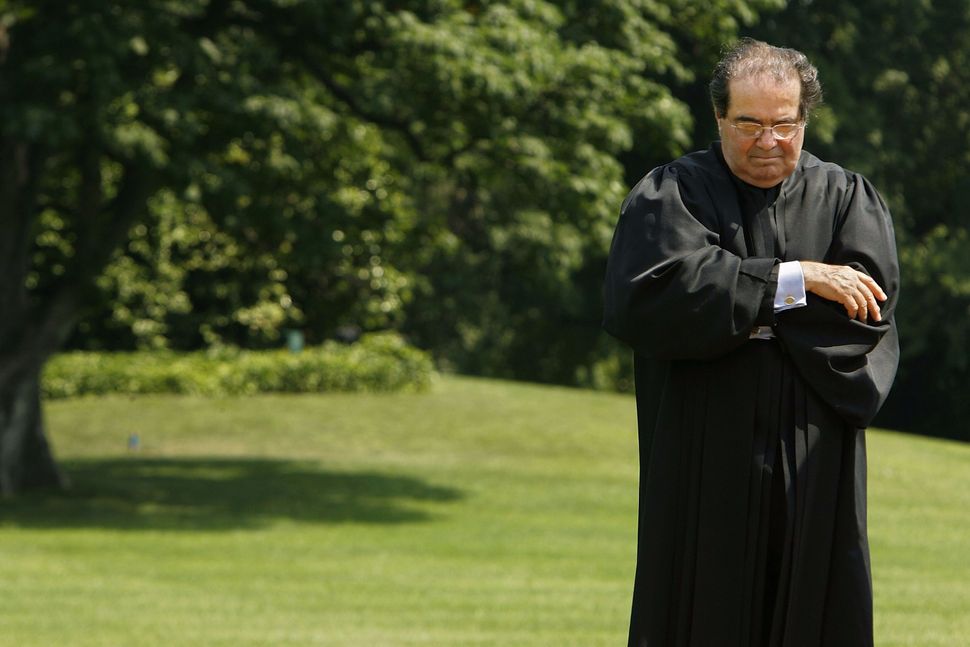 When Supreme Court Justice Antonin Scalia — likely one of the most influential justices to ever sit on the Court — was found dead at the age of 79, the news sent shockwaves through the country. His death has significant implications for the cases currently on the Supreme Court’s docket.

The remaining eight justices frequently split somewhat evenly along the ideological spectrum, leaving the prospect of 4-4 deadlocks as a potential outcome until another justice joins the Court. For this reason, Scalia’s death will likely send parties with cases currently before the Court scrambling, trying to assess the implications of the Court’s current — and potential future — alignment for their own pending claims.

Of particular consequence to the American Jewish community are two church-state cases currently before the Court. The first case, Zubik v. Burwell, addresses the ongoing litigation over the Affordable Care Act’s so-called “contraception mandate,” which requires covered employers to provide employees health insurance that includes contraception. This requirement has sparked multiple rounds of litigation, as hundreds of religiously motivated employers have argued that complying with the mandate would require them to violate their religious commitments. The Supreme Court first waded into these waters in 2014, issuing its landmark decision Burwell v. Hobby Lobby — a decision in which Scalia provided the crucial fifth vote — which held that enforcing the mandate against closely held for-profit entities violated the Religious Freedom Restoration Act.

But this exception itself is now being challenged in Zubik, with many religiously motivated not-for-profit employers arguing that the very process of securing the exemption violates RFRA. According to these plaintiffs, filing the form that notifies the insurance administrator of the employers’ religious objection is itself a prohibited substantial burden on their religious exercise because it triggers the contraception coverage — even though that coverage is paid for by the insurances company — and thereby makes them complicit in “sin.”

At stake in the case is determining what constitutes an impermissible “substantial burden” on religion under the applicable Religious Freedom Restoration Act. Most courts have been deeply skeptical of viewing the very process of providing the exception to the contraception mandate — filing of a form — as itself constituting a substantial burden; how can merely filing paperwork be a substantial burden?

The rejoinder to this prevailing skepticism — a rejoinder many believed Scalia was likely to embrace — is that courts cannot, in keeping with the constitutional principles of separation of church and state, decide which legal burdens are theologically substantial and which are not. Doing so would lead courts to divvy up legal responsibilities on the basis of what kind of theological burdens it thought were and were not sufficiently important, the type of inquiry prohibited by the First Amendment.

Indeed, many religious minorities have worried that this type of judicial incursion into the sphere of theology would likely result in courts granting exceptions to religious majorities, while religious minorities — with their unfamiliar practices — might be left out in the cold. And given expectations of Scalia’s antipathy for judicial incursions into theology, a cornerstone of his landmark 1990 opinion Employment Division v. Smith, his death makes it all the more likely that the plaintiffs in Zubik will be unable to garner a majority of Supreme Court justices supporting their claims.

In the second pending church-state battle before the Court, Trinity Lutheran Church v. Pauley, the Court is set to address a constitutional challenge stemming from Missouri’s denial of Trinity Lutheran Church’s grant application for funds to purchase recycled tires to improve the safety of its school playground. The reason for the denial: a Missouri law that states, “No money shall ever be taken from the public treasury, directly or indirectly, in aid of any church, section or denomination of religion.”

Of particular importance is that this law’s unyielding language appears to ban funding for religious institutions beyond what is required by the First Amendment. And because well over half the states have similar laws — laws often referred to collectively as Blaine Amendments — this case presents an important battleground over the extent to which religious institutions will be able to receive government funding.

In a 2004 case addressing a similar issue, Scalia issued a strong dissent against government attempts to restrict funding “solely on the basis of religion”; he believed doing so constituted constitutionally impermissible religious discrimination. This view dovetailed with the history of Blaine Amendments, which were largely enacted amidst strong anti-Catholic — and anti-religious minority — sentiments. Notwithstanding these concerns, the Supreme Court’s 2004 decision conceded that in some instances, states could prohibit government funding to religious institutions — that is, solely on the basis of religion — even where the First Amendment did not require them to do so.

The case now before the Court, Trinity Lutheran Church, brought this conclusion back into question, and Scalia was widely seen as the strongest advocate against discretionary restrictions on state funding of religious institutions. Any Supreme Court decision rolling back the ability of states to reject funding requests by religious institutions would likely have wide-ranging impact for a whole host of religious communities, including the American Jewish community. While the Court’s decision to hear Trinity Lutheran Church raised the hopes of many such communities, Scalia’s death makes the prospect of a victory in the case far less likely.

In these two ways, among others, Scalia’s death has heightened uncertainty over the relationship between church and state going forward. When it comes to both legal burdens on religion and government funding of religion, Scalia’s voice was likely to support positions held by many religious groups, including those of religious minorities. And the coming debates and machinations over his replacement will probably provide a glimpse into how the Supreme Court will address these high-profile church-state cases going forward — cases that remain of vital interest to the American Jewish community.

How Will Antonin Scalia’s Death Affect 2 Cases of Jewish Interest?