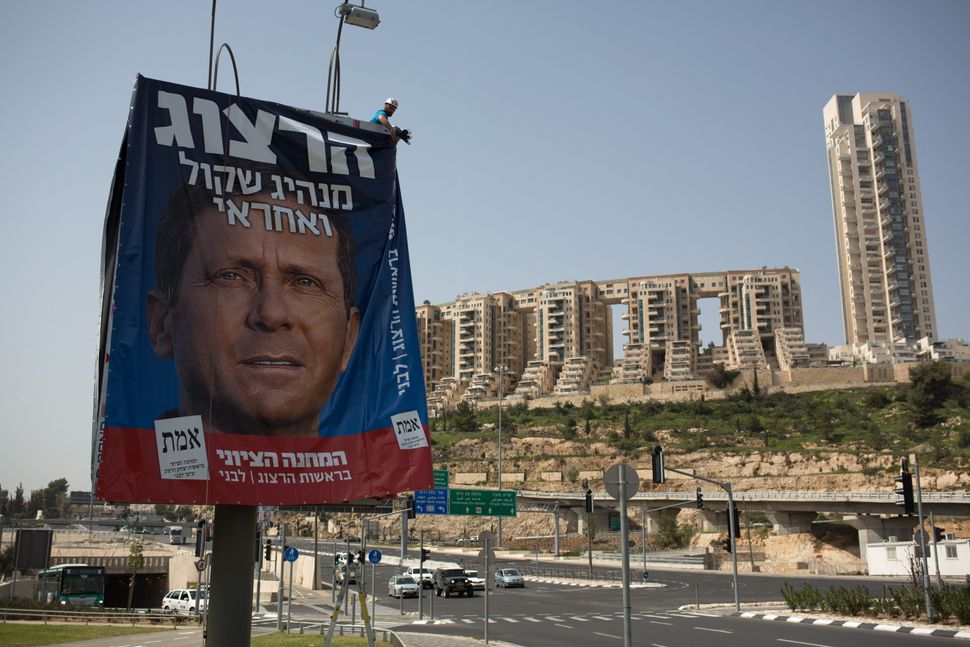 Israeli opposition leader Isaac Herzog has announced that, since a two-state solution to the Israeli-Palestinian conflict is not currently viable, Israel should take unilateral steps to manage the conflict. These steps include cutting off a number of Palestinian neighborhoods from East Jerusalem.

“Then we’ll reunite the true Jerusalem, without hundreds of thousands of Palestinians, who will remain on the other side of the barrier,” Herzog said at the Jerusalem Conference. “We’ll separate from them. We’ll build a wall. Terrorists won’t have access to Jews. Those who want to work and make a living rather than stabbing people — we’ll leave those for the consideration of the defense establishment.”

Herzog isn’t the only, or even the first, Israeli politician to take this stance. Divisions, walls and getting rid of “them” are the current political bon ton. And they’re an expression of everything that is wrong with the way Israeli leaders think about and try to resolve the conflict in Jerusalem.

In his statement, Herzog reveals that he sees Jerusalem as little more than a geographical chessboard filled with political pawns instead of as a real, living, breathing city.

After nearly half a century of control over East Jerusalem, Israeli politicians have come to believe that they can define the city’s boundaries by fiat and by force. Because Herzog thinks in terms of sovereignty, possession and ownership rather than in terms of urban fabric, the right to the city and a human sense of belonging, he feels that he can unilaterally demolish and construct.

And because for nearly 50 years Israel has consistently discriminated against the Palestinian residents of East Jerusalem, according them residency (which can be, and often is, revoked) rather than citizenship, and providing them with inadequate and inferior services, Israeli leaders seem to think that they can attend to the geography while ignoring the people who live here. But it is foolish to suppose that the Palestinians will have no response to being cut off from their holy sites, their sources of income, health care, families and identity as Jerusalemites.

Although precise numbers are hard to come by, it is estimated that between 80,000 and 100,000 residents of East Jerusalem have already been cut off from Jerusalem by Israel’s separation barrier. Since they are on the “wrong side” of the barrier, the municipality of Jerusalem refuses to provide them with any municipal services. But since they officially live within the boundaries of municipal Jerusalem, the Palestinian Authority does not take responsibility for their welfare and safety either. Herzog’s proposal would double the number of Jerusalemites who live in this political no-man’s-land and human catch-22.

Yet, there is a reason for this madness. Since the Six Day War in 1967, Israel has tried to maintain maximum territory with a minimum of non-Jewish residents in Jerusalem. In other words, it has attempted to preserve Israeli demographic superiority by annexing territory while simultaneously excluding tens of thousands of Palestinians from Jerusalem’s municipal boundaries. Building barriers, as Herzog proposes, is just one more attempt to achieve these goals, under the guise of security considerations.

Of course, none of this is to suggest that we, as Jews, must deny our own love and loyalty to Jerusalem.

Throughout its troubled history, Jerusalem has been conquered, captured, liberated and occupied (depending on your point of view) hundreds of times by rulers who thought they could control the city. In the last century, politicians, warriors and diplomats have produced nearly 100 proposals for a resolution to the conflict in the city. But since these plans have focused on sovereignty and control over the holy places, they have failed.

Jerusalem refuses to be owned or possessed, divided or united. To survive, Jerusalem must answer to the religious and national emotions that divide us as Jews and Arabs. And it must also provide for the urban needs that unite us and shape our identities as Jerusalemites.

To thrive, Jerusalem must be creatively shared — and that means that it must be both politically divided and geographically and functionally united. Jerusalem must become the capital of two independent states, Israel and Palestine. This plan was proposed in 2006 by the Jerusalem Forum, a working group composed of Palestinian and Israeli planning and human rights professionals (myself included). According to the plan, East and West Jerusalem will become separate municipalities answering to the needs of their respective constituencies. At the same time, Jerusalem must remain an open, functional city in which people and goods flow freely between the different sectors. In this way, the city will be able to maximize its cultural and religious heritages with religious pilgrimage, secular tourism, financial services and institutions of higher learning.

Considered as a political entity, the city will comprise two Jerusalems. But in terms of its functions as a real, physical city, it will be administered by one umbrella municipality. And a joint administration will be created inside the Old City, with international support and supervision.

It’s complicated, of course, but it can be done. A transborder metropolitan zone exists on the Italian-Slovenian frontier. And cities such as Belfast and Sarajevo are both united and divided, and are now mostly at peace.

Achieving this vision will require moral imagination, political courage and generosity of spirit. It can only be implemented by people who truly love the city and dream of all it can be. Unfortunately, as Herzog’s populistic declarations show, these qualities are not readily available on either side of the conflict.

But without these qualities, we will be caught forever in the cycle of sadness that Yehuda Amichai warned us about in his poem “Mayor” (the translation is Assia Gutmann’s):

It’s sad
To be the Mayor of Jerusalem.
It is terrible.
How can any man be the mayor of a city like that?
What can he do with her?
He will build, and build, and build.
And at night
The stones of the hills round about
Will crawl down
Towards the stone houses,
Like wolves coming
To howl at the dogs
Who have become men’s slaves.