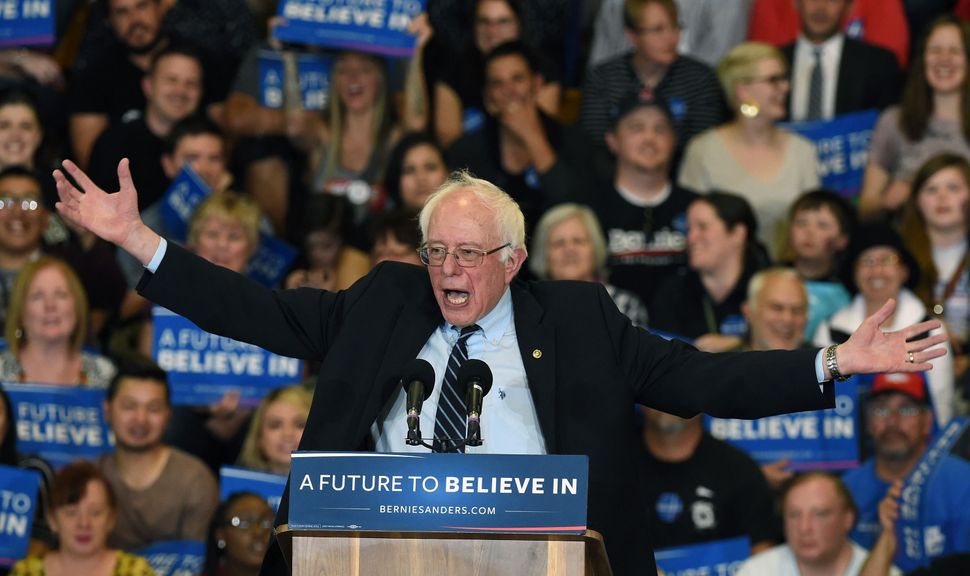 Bernie Sanders is marching through his presidential campaign with a giant target on his back: his Jewishness. Unless the Democratic candidate begins to more publicly admit his Jewish identity (even though he doesn’t practice Judaism as a religion), it will become a huge vulnerability. If nominated, he will leave the Democratic Party susceptible to ugly smears by the Republicans, the press and conservative political action committees.

So far, Sanders has downplayed his Jewish heritage almost to the point of renunciation. In the victory speech he delivered after winning the New Hampshire primary, he said, “I am the son of a Polish immigrant.” He did not identify as “the son of a Jewish immigrant” or, even more simply, as a Jew.

And in the February 11 Democratic debate in Milwaukee, Hillary Clinton agreed with the moderators that if elected, she would make history as the first woman president. Sanders followed up by saying, “Somebody with my background, somebody with my views… I think a Sanders victory would be of some historical accomplishment as well.” For reasons he has not made clear, he is not naming his “background.”

But as the nomination process continues, it is imperative that Sanders name this background often — because you better believe the Republicans and the conservative press will, if he gets the nomination. Using oblique and coded language in small-town newspapers, and using more direct language on conservative radio, his opponents will call into question both his loyalty to America and his fundamental Americanness. For many Americans, national identity includes Christian identity. This understanding of “authentic” Americanness is rarely discussed and often not even acknowledged consciously, but I believe it remains part of the mainstream American Christian psyche, even among those who might vote Democratic.

Suggestions that Sanders is not really “one of us” could become a true wedge issue and derail the campaign. One pointed attack ad by a Republican PAC could undermine Sanders’s appeal to universalism and unity. I’m reminded of George H.W. Bush’s ad against Michael Dukakis in 1988. Featuring Willie Horton, it played on conscious and unconscious racism and on the fear of African-American criminal violence. During Dukakis’s term as Massachusetts’s governor, Horton, a convicted murderer serving a life sentence, was allowed weekend furloughs, and during one of them he committed murder and rape. Horton was used as a symbol of Dukakis’s weakness on crime, and ended up becoming one of the most potent symbols in the entire campaign.

If Sanders is not careful, his Jewishness could become his Willie Horton. To avoid that fate, Sanders could do what John F. Kennedy did during the primary campaign in a place like West Virginia, where there was deep distrust of North Easterners and suspicion of Catholics. After admitting his Catholicism, Kennedy invited Franklin Roosevelt, Jr. to campaign with and for him. Roosevelt’s mere presence and endorsement turned the election, according to accounts by historian Theodore White. The Roosevelt connection helped Kennedy gain more trust and seem less foreign to voters in West Virginia.

The Sanders campaign should take a page from Kennedy’s book and draw connections to the history of Jewish activism that has aided civil rights, led the fight for a 40-hour workweek and unionization, and reopened the doors to immigration (remember Senator Jacob Javits and the 1965 immigration bill that emphasized family reunification over skill level?). In my own experience from my home state of Indiana, Bible Belt Protestants have a deep reverence for Judaism, and if Sanders can create a narrative to capitalize on that, he will survive.

But if he does not tell his story well, it will get told for him. And it won’t be pretty.

In fact, rather than passively hoping that Sanders takes control of the narrative, we should all be speaking up about his Jewish heritage. Primary campaigning serves as a vetting process to find the candidate that stands the best chance of winning the general election. If Sanders’s Jewishness is not fully vetted and presented to voters, we might not find the truly stronger candidate.

In an ideal world, Sanders’s Jewish identity wouldn’t be an issue for his campaign one way or another. But we do not live in an ideal world. So whether or not he thinks of himself as a Jew, his Republican opponents will. Their surrogates won’t stop at painting him as a New York socialist; even if he leaves out the word “Jew,” they will not.

Let’s begin to out Sanders as a Jew now, so that if the country is not ready for a Jewish president, he won’t win the nomination. By creating a positive Jewish narrative, we just might erase that target from his back.

Rabbi Valerie Lieber was ordained in 1995 from Hebrew Union College-Jewish Institute of Religion, in New York. She is the director of education and family programs at Brooklyn’s Kane Street Synagogue.