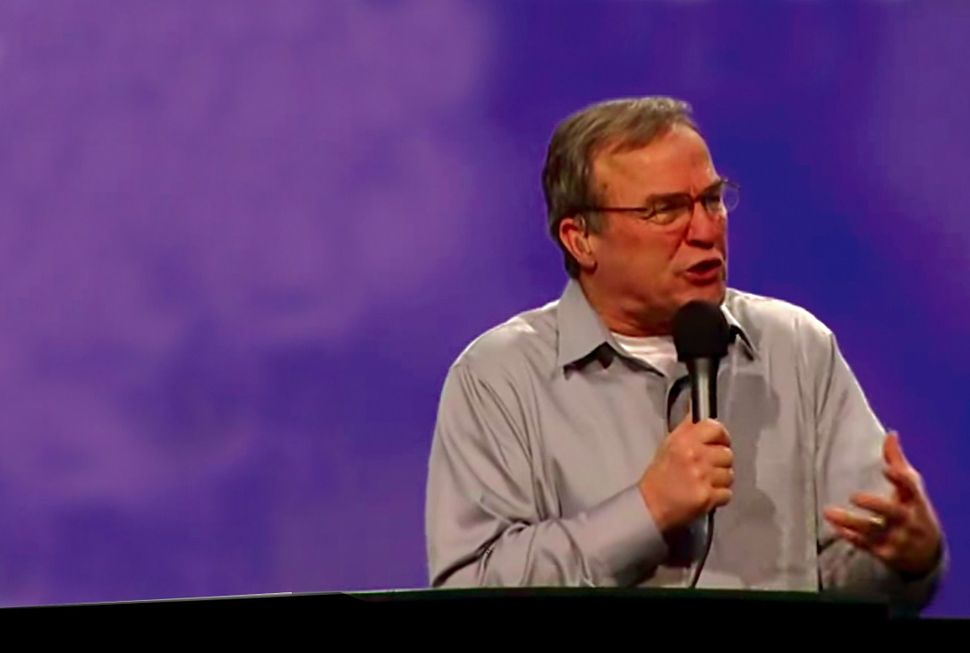 Republican presidential candidate Ted Cruz has come under fire from Jewish groups after touting his endorsement from Mike Bickle, an evangelical leader being scrutinized for preaching that God sent Hitler to hunt the Jews.

This single statement, though, is just one element of Bickle’s divisive repertoire. Bickle, a charismatic Christian who believes he receives prophecies and visions directly from God, teaches that the best Jew is a messianic Jew, one who has accepted Jesus Christ as the Messiah. Bickle’s ministry, the International House of Prayer, in Grandview, Missouri, is defined by a quest to cure Israel and Jews around the world of their “spiritual blindness” to Jesus.

Despite what many Republicans — Jews among them — would have us believe, there is no way to consider a man like Bickle pro-Israel.

Cruz’s campaign has responded to criticism from the Anti-Defamation League and the National Jewish Democratic Council by reacting to Bickle’s statement about Hitler, not to the entirety of his controversial teachings. Nick Muzin, a senior adviser to the Cruz campaign who is Jewish and well known, and liked by Jewish Republicans, told Jewish Insider that the preacher was “paraphrasing the words of the prophets Jeremiah and Zechariah.” Bickle, Muzin insisted, “has made support for Israel and the Jewish people a central part of his mission.”

Cruz subsequently the Times of Israel that he rejected Bickle’s statement about Hitler and the Jews, but made clear that he still welcomed his endorsement.

Bickle took to the pages of the Times of Israel to charge that his words had been “misinterpreted” by a “secular media” for whom “taking Scripture out of context is routine.”

“Let me be clear,” Bickle wrote, demonstrating that he and Muzin were reading from the same script, “I have made support for Israel and the Jewish people a central part of my ministry.”

Bickle is right that Israel and the Jews are a central part of his ministry. But for Jews, his vision of what Israel is or should be, and what Jews are or should be, would be frighteningly unrecognizable.

In reaching this conclusion, I have not taken Scripture out of context. I have not relied on mere snippets of Bickle’s teachings. I have based this assessment on years of reporting on Bickle, spending hours in the IHOP prayer room in Grandview, covering him speaking on the National Mall in 2008, at former Texas governor Rick Perry’s 2011 prayer rally in Houston and at his own Forerunner Christian Fellowship in Missouri. I have listened to hours of his sermons and pored over his extensive writings. I have visited houses of prayer modeled on his, from rural South Carolina to Jerusalem. I have interviewed his admirers, his detractors and his disillusioned former followers. In 2012 I spent two weeks in Israel, immersing myself in the small community of messianic Jews and their Christian supporters, many of whom affiliate with Bickle and IHOP.

Regardless of whether you are on the right or the left, a hawk or a dove, AIPAC or J Street, a full accounting of Bickle’s teaching would lead you to conclude that Bickle is not interested in Jewish history or in Israeli reality. He does not address the political alternatives Jews themselves argue over, such as Jewish nationalism versus pluralistic democracy, or continued settlement building versus a two-state solution. It’s impossible to place him on this ideological spectrum, because his public views on Israel are entirely devoted to an end-times prophecy in which Jews and Israel must repent for not accepting Jesus as the Messiah.

Bickle’s teaching is unequivocal: Jews must accept Jesus in order to accomplish God’s will that Jesus return to Jerusalem to rule the world from his throne on the Temple Mount. It’s hard to imagine how a Zionist of any stripe would define this position as pro-Israel.

In a 2009 speech, Bickle said, “The Jewish people have a temporary spiritual blindness,” and Israel has “stumbled” by not accepting Jesus as the Messiah. God wants the gentiles to “provoke Israel to jealousy” over their lack of belief in Jesus, Bickle said, after which the Jews will say to the gentiles, “’I want what you have in God.’”

He argued that a “massive invasion of holy spirit power” is far more important than politics when it comes to Israel’s future. “I appreciate marches and lobbying and different things that guys do in the political arena,” he said. “But the only way that Israel has a chance is through a massive outpouring of the Holy Spirit and the return of Jesus.”

In a 2014 speech at his annual Israel Mandate conference, “The Battle for Jerusalem,” Bickle acknowledged that his beliefs “would not go over very well” in the Knesset. But he nonetheless made the farcical prediction that there will be a “complete shift in view of the Israeli government about Jesus.”

According to Bickle, God will send Jesus back to Jerusalem only “after the Jewish people repent.” He urged his followers to drop everything and attend to instigating this collective repentance. “Whatever else we do, there are a few other things we need to do. We need to see Jews in Jerusalem connecting with Jesus,” he said. “Absolutely top priority.” In Israel, I met Messianic Jews and Christians alike who shared this outlook.

Jewish leaders who embrace Christian Zionism have long claimed that theological differences are irrelevant when Israel needs its evangelical allies. “I’m not here to question people’s motivations,” Republican Jewish Coalition President Matthew Brooks told me last year, speaking generally about evangelical support for Israel. “It’s not for me a theological discussion, it’s a question of who’s standing by Israel when Israel needs it the most.”

But messianic Judaism is growing in popularity in some evangelical circles, including Bickle’s. It has become mainstream enough that former president George W. Bush headlined a fundraiser for a major messianic Jewish group in 2013 with little consequence. The question now is how much longer Jewish leaders will continue to pretend that such people’s activities represent “support” for Israel, and how much longer they can keep saying that theology is irrelevant.

Sarah Posner is an investigative journalist and author. Her work has appeared in The New York Times, The Washington Post, Rolling Stone, The Week and elsewhere.