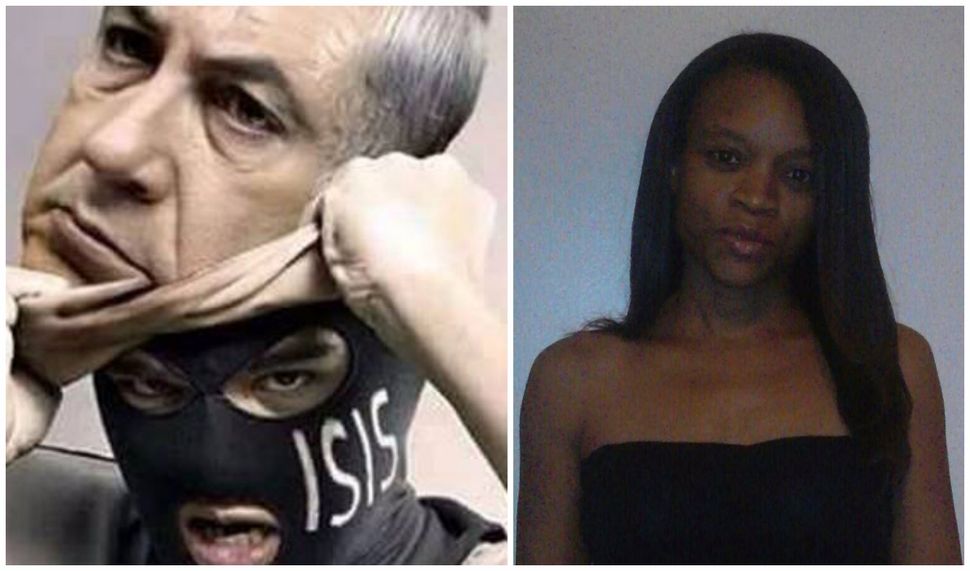 Isabel Sherrel, an alumna of Oberlin College, recently did something courageous. She decided to treat her alma mater’s assistant professor of rhetoric and composition, Dr. Joy Karega, like a human being and actually reach out. She wanted to dialogue over the anti-Semitic conspiracy theories that Karega had reportedly been posting about on Facebook.

Karega has shared a series of posts alleging that Jews or Israelis were behind 9/11, ISIS, Charlie Hebdo and the Paris attacks, . The posts suggest she believes that Jews control the U.S. government and that Mossad engineered the downing of a Malaysian airliner over Ukraine in 2014, and that she agrees with aspects of Nation of Islam leader Louis Farrakhan’s beliefs.

In Sherrel’s own words on her Facebook page: “I sent this professor an honest, respectful, and open-hearted response to her anti-Semitic Facebook page. Good to know that I was operating on a false assumption: that she is a good-hearted person who is not educated on the history of anti-Semitism and thus via ignorance has fallen into the trap of perpetuating classic Jew hatred. Nope, nope, nope.”

Karega’s recent response on Facebook to the multiple letters, tweets, phone calls and messages she has received offer further insight into her beliefs. Karega views letters like Sherrel’s and others as fodder for her theories: “My Oberlin email, my Facebook message inbox, my office phone voicemail, and my Twitter account are the gifts that keep on giving. Honestly, I’ve been having these moments (very brief moments, haha) where I want to say to those of you who are emailing, calling, and surveilling my social media accounts for malicious, intimidation, and/or silencing purposes: ‘Folks, you all are making my work too easy; handing my research right to me.’”

What research is that? “My second book project, which I have made significant progress on in terms of research, planning, and the drafting of chapter templates, is entitled Conspiratorial Political Literacies: Rhetorical Practice, Contested Knowledge, and Subversive Politics… It’s downright lazy, uncritical, apolitical, homogenizing, and reductionist to frame conspiracy theories — and the rhetors, writers, and theorists who espouse such theories — in the way that much of the general public, governments, and the academy do. (I won’t lay out that argument here. But it’ll be CLEARLY articulated in one of the chapters of the book).”

The disturbing argument at work behind all the impressive academic verbiage is that a conspiracy theory, and more specifically an anti-Semitic conspiracy theory, is a legitimate social discourse that should not be silenced or controlled by “relations of power” that authorize accusations of anti-Semitism. In other words, Karega wants to study how Jews silence anti-Semites.

For those dulled to such language, how would it sound if we substituted “how Muslims silence Islamophobes” or “how African Americans silence White Supremacists”? And of course the question here is not whether Karega should be “silenced,” but rather whether she should be funded as a professor at one of the leading liberal arts colleges in the U.S.

Here’s Karega again: “Also worth investigating and exploring, I can generate articles for days on what I can describe as ‘anti-Semitism call-out culture’ and some of its accompanying practices. I don’t have to tell some of you that these recent activities in my own professional life have handed me a LARGE body of data (emails, voicemail messages, tweets, Facebook inbox messages, etc.) that will shed light on and provide insight into how and to what extent anti-Blackness rhetorics show up in anti-Semitic call-out culture and practices.”

“Anti-Semitism call-out culture” (which, despite its flaws, other people might think of as “social justice culture” or “human rights culture”) contains “anti-Blackness rhetorics,” according to Karega. So when Jews defend themselves against racism and hate speech they are 1) engaging in a kind of rhetoric based not in morality but in power dynamics, and 2) they are themselves guilty, in an as yet undisclosed manner, of anti-black rhetoric. Elsewhere Karega has argued that it is common “for Black women, who are early in their career on the tenure track as part of the professoriate, to be prime targets for these kinds of activities and practices.”

Meanwhile, Karega’s rhetorical practices are having real-world consequences on campus. As Sherrel wrote in response to Karega’s Facebook post: “Apparently, this professor is intent on demeaning and belittling Jewish students and alumni concerns about her anti-Jewish ideology and how much of it spills into her classroom lectures. She doesn’t care that people are deeply hurt, sad, scared, not going to class, or feeling physically ill because her posts are so violent against us. Apparently, this professor sees us as objects to be scrutinized, we are sources for her research, we aren’t real people who deserve a response let alone an apology, we are mere specimens under her microscope!!!”

Oberlin president Marvin Krislov, who is Jewish, has refused to discipline Karega, and defended her right to free speech, stating, “Acknowledgement of this right does not signal institutional support for, or endorsement of, any specific position. The statements posted on social media by Dr. Joy Karega, assistant professor of rhetoric and composition, are hers alone and do not represent the views of Oberlin College.”

But that’s cold comfort for an alumna like Sherrel. “These are not just ideas,” she told me on the phone. “These are ideas which have been used to kill Jews.”

Matthew Gindin is a freelance writer and journalist located in Vancouver. He blogs on spirituality and social justice at “seeking her voice” and writes for the Jewish Independent. He has also been published in Tikkun, Elephant Journal, Wisdom Pills and elsewhere.