Donald Trump made American presidential history during Thursday night’s Fox News Republican debate in Detroit. He became, as far as I can tell, the first major presidential candidate ever to tout the size of his genitalia as a campaign issue.

The topic had initially been raised by Marco Rubio on February 28 at a rally in Virginia. Referring to Trump’s stubby fingers, a longtime sore point for the mogul, Rubio teased: “You know what they say about men with small hands — you can’t trust them.”

Trump’s reply came about 10 minutes into the March 3 debate, during an exchange about the gutter tone of the GOP campaign. “He referred to my hands,” Trump complained. “If they’re small, something else must be small. I guarantee you, there’s no problem. I guarantee.”

Read transcript of the debate here

The unconventional debating tactic drew roars from the audience and dominated post-debate media and Twitter response. Pundits from right to left were tut-tutting that the public’s fascination with Trump’s endowment distracted from the campaign’s crucial policy issues. Typical was this tweet from human rights maven (and former Forward staffer) Philip Gourevitch: “How much press attention has been given Trump promising more US torture & war crimes vs. him guaranteeing the size of his junk?”

Gourevitch was referring to one of Trump’s most controversial policy proposals: a vow during an earlier debate to combat terrorism by reviving the discredited practice of waterboarding and ordering the killing of terrorists’ families. He doubled down on those promises during Thursday’s debate, in response to a question from Fox moderator Bret Baier about a possible refusal by the military to carry out such illegal orders.

“We should go for waterboarding and we should go tougher than waterboarding,” Trump said. “That’s my opinion.” He went on to repeat an urban legend that families of the 9/11 terrorists had known about the plot in advance but were allowed to leave America in the days before the attack.

The exchange prompted numerous post-debate expressions of outrage, Much was directed at Trump’s torture remarks. But some, including Gourevitch, Jeffrey Goldberg and others, chastised the media for leading debate coverage with Trump’s pubic disclosure and burying the campaign’s real issues.

Alas, Gourevitch and the others missed the point: Trump’s masculinity is the central, um, thrust of his campaign. Ever since he floated down the Trump Tower escalator to enter the race last June, he’s conducted an essentially policy-free campaign. His central theme has been his own superiority as the alpha male on the stage — smarter, tougher, more successful than all the other losers and weaklings in the arena. His single selling point is the power of his will, his ability to bend others to do his bidding. 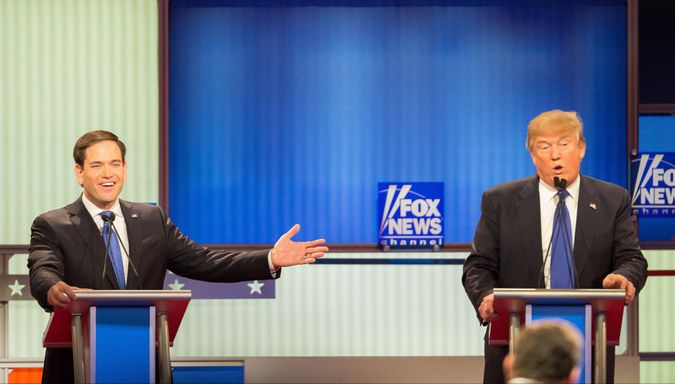 That’s why he keeps coming back to insult and invective in his speeches and debates, and why it so befuddles those around him. Everyone who faces him — rivals and observers alike — remains convinced that his bullying swagger is a quirk that pops up at inappropriate moments and keeps him from engaging seriously on his positions. They miss the fact that bluster is his position. It’s not a bug in his operating system — it is his operating system.

Trump himself doesn’t seem to be fully aware of what drives him. Having spent his life in the esoteric world of New York real estate, he shares the assumption of his fellow landlords that swagger and machismo are synonymous with wisdom. Even within that subculture, it’s his conceit that he’s the king of the hill. He’s the one who’s built the tallest, most imposing towers, thrusting manfully upward against the skyline, each with his name emblazoned in gold. His manhood stands tall above the landscape, dwarfing all else.

Like other developers, but better than them, he buys cheap and sells dear by bullying everyone around him. He doesn’t need to know architecture or drafting or engineering or plumbing, because he can hire people who do and set them to work. That’s how it’s done in his world. And he assumes that’s how it’s done everywhere else, including Washington. He seems genuinely surprised and offended when others suggest that he should be familiar with facts and issues like international law and health care delivery. That stuff is beneath him. It’s for losers.

Still, the criticism must be getting to him, because he tried earnestly during the Detroit debate to discuss issues. Unfortunately, his explanations of his plans kept sliding into insults of others’ performance. He can’t stick with what the rest of us call substance for more than a sentence or two before reverting to type.

Further undermining his efforts to elevate his tone, he came under withering attack from Rubio and the Fox moderators for his business practices and his inability to stick to a single story. And, no matter how hard he tried, he couldn’t maintain his composure. Again and again he melted down and began spouting schoolyard insults.

Particularly devastating was a pair of video clips introduced by moderator Megyn Kelly. The first showed Trump telling Chris Cuomo of CNN that America “made a terrible mistake getting involved” in Afghanistan. “That thing will collapse about two seconds after they leave. Just as I said that Iraq was going to collapse after we leave.” The second clip showed him flatly telling another interviewer that he “never said” Afghanistan was a mistake. Trump responded to Kelly that “on Afghanistan, I did mean Iraq” — even though he’d clearly cited the two countries as separate, distinct “terrible” mistakes.

Trump’s worst tangle, though, was a sustained two-on-one attack by Kelly and Rubio over his failed Trump University project, which promised to teach students sharp business tactics but led to lawsuits for alleged fraud. Trump said the suits were still in litigation, and observers should suspend judgment until they’re resolved “at the end of three years” — presumably long after he’s entered the White House.

In fact, Trump couldn’t do it. It just isn’t how he operates. He made faces. He spouted insults. He denied, argued and flung accusations. His facade crumbled and he melted down like a two-year-old.

Afterwards, Fox cut to pollster Frank Luntz with a focus group of Republicans who’d watched the debate. He asked for a word or phrase to sum up the debate. The answer: “sophomoric,” “disgusting,” embarrassment,” “shameful,” “despicable” and “schoolyard brawl.” By a show of hands, most present had entered as Trump supporters. By another show of hands, everyone thought he’d lost the debate.

Trump can’t help it. It’s not a bug but a feature. On the other hand, it’s what’s attracted his supporters up to now, while everyone around underestimated him. The question now is whether he can ride it into the White House.