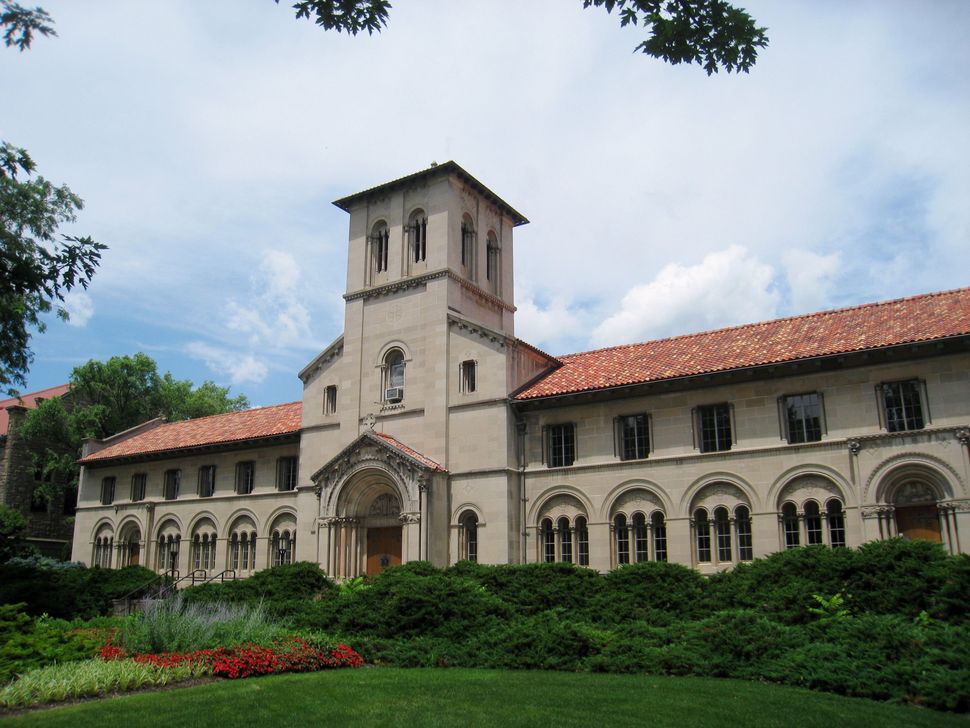 As a high school teacher in suburban Chicago, I have written many recommendation letters for students who hoped to attend Oberlin College, and several of my wonderful young students have attended and graduated from Oberlin.

But I will no longer be writing recommendation letters to that college, and I encourage my colleagues in secondary education to stop sending students there, too.

Oberlin’s Joy Karega-Mason, a professor of rhetoric and composition, posted outrageous and defamatory comments on Facebook that reflect and promote a deep hatred of Jews. Her conspiratorial accusations that Jews run ISIS, shot down the Malaysian airliner in Ukraine, secretly run the American government through their supposed control of central banks, committed the attacks of 9/11, and committed the attacks against Charlie Hebdo in Paris, are vile, unadulterated anti-Semitism. They read like an updated version of “The Protocols of the Elders of Zion.” Her posts are bigoted and disgusting, and she is a stain on the legacy of Oberlin College.

In my U.S. History classes, we study the founding of Oberlin as an important moment in American history; we examine the college’s openness, egalitarianism, and opposition to the bigotry that was rampant in the antebellum period. While the rest of the country is increasingly awakening to the persistence of systemic racism and privilege in our society and its power structure, Oberlin seems now to be moving in the opposite direction.

As the Supreme Court has noted, “the classroom is peculiarly the marketplace of ideas,” and neither students nor teachers shed their constitutional rights at the schoolyard gate. While many people have called for Oberlin to fire Karega-Mason on the grounds that she is advocating bigotry and hatred, I don’t. The fundamental problem is that what she is saying is factually wrong. If a professor posted that “slavery never happened” or that “Thomas Jefferson was a Federalist spy, intent on ruining the Democratic-Republican Party,” Oberlin would certainly remove that professor from the classroom. For a classroom to be the “marketplace of ideas,” the facts used to support those ideas must be true. Controversial opinions or conclusions must be welcomed; indisputable facts, however, cannot be replaced with utter falsehoods.

That Karega-Mason proffered these falsehoods on her social media accounts and not in the classroom does not free Oberlin from an obligation to take action. Although hate speech merits constitutional protection, it does not merit promotion by or tacit acceptance from academic institutions. Her statements did not remain in the private sphere, and much of teaching, reading and learning today happens online. Her students and others look to her as an educator, and she is providing them with lies. This anti-intellectualism is exactly the opposite of what Oberlin is supposed to provide its students.

By allowing her to maintain her job at Oberlin, the college is not respecting “academic freedom,” as President Marvin Krislov argued. His position falsely implies that Karega-Mason’s statements have scholarly merit. In addition to telegraphing to Oberlin’s students and the public at large that anti-Semitism, bigotry and hatred have a clear place at Oberlin, Krislov is also saying that scholarship does not necessitate factual evidence.

That’s why I cannot in good faith recommend my students to Oberlin. They simply deserve better. I will instead recommend them to schools that have the courage to say no to hatred, anti-intellectualism and historical inaccuracy.

Michael Soffer is a veteran high school teacher in the Chicago suburbs.