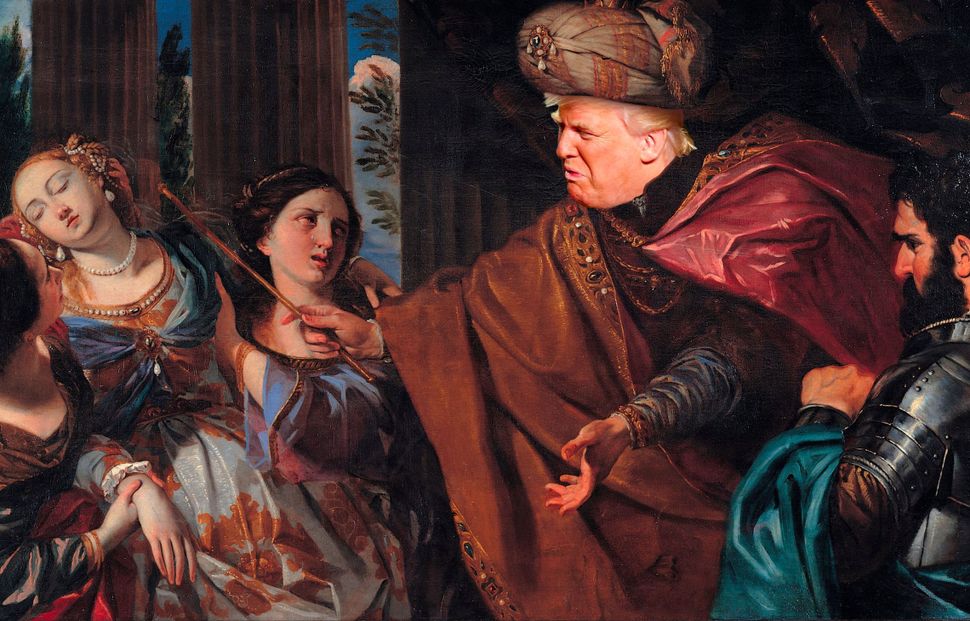 With Purim around the corner, it occurs to me that many people see Donald Trump as Haman, the genocidal villain of the Purim story. That’s not quite right: He’s Ahasuerus, a different kind of danger, and one that’s worth contemplating today.

In case you need a refresher, Ahasuerus, in the Book of Esther, is the ruler of Persia. His empire is depicted as vast, wealthy, diverse and decadent, stretching from Ethiopia in the west to India in the east. Historically he may be identical to (or based on) Artaxerxes, but this doesn’t really matter. In literary terms, his character is a sharp satire on the foolish king swayed by his own appetites and by scheming ministers, Haman chief among them.

Except, Ahasuerus isn’t quite a fool; he, like Trump, is a violent demagogue concerned with his own aggrandizement and power. In the satirical presentation of the Book of Esther, Ahasuerus’s decadence rivals that of Mar-a-Lago and Trump’s other gilded residences; the king’s banquets stretch on for months, his many wives pampered and beautified.

And yet, Ahasuerus can also be cruel. He thinks nothing of signing a decree calling for genocide against the Jews, and is persuaded otherwise only when he finds out that his beloved Esther is a Jew herself. (Notice that she does not make a moral argument to the king; she only notes that she might be victimized.) And according to Esther, his temper is so bad that even approaching him unbidden invites the risk of death.

Ahasuerus is also maniacally focused on his own power. When Vashti, one of his wives, fails to appear (probably naked) at his command, the sycophant Memuchan warns the king that she might inspire women across the empire to rebel. So the king banishes her. And of course, Ahasuerus is easily persuaded by Haman that the Jews pose a threat to his rule.

But here’s the central point. In some midrashim, Ahasuerus is depicted as even more dangerous than Haman. With Haman, you know what you’re getting. He is a Hitler-like figure who makes no bones about his thirst to murder Jews. Ahasuerus, though, is what gamers of a certain age call “chaotic evil.” You just don’t know what’s going to come out of his mouth next. Unlike Haman’s principled evil, there seems to be no principle guiding Ahasuerus’s choices, other than his own fickle whim. His only policy is himself.

This, I think, is where we find ourselves with the likely Republican nominee.

Unlike some, I don’t see the evidence that Trump is an overt racist — not quite. He slanders “illegal” immigrants, but not Latinos in general. He wants to commit war crimes against Muslim families in the Middle East, and generalizes horribly from a few Islamic extremists to all Muslims in general, but even that’s not calling for genocide à la Haman.

Rather, like Ahasuerus, Trump knows how to play on public opinion. He is, by his own admission, a salesman and dealmaker. In his bid for power, he exploits whatever fears, resentments and anxieties will get him where he wants to go.

That’s why it’s so easy to put on a “Trump versus Trump” debate, as Stephen Colbert did a few weeks ago. Trump’s is not a principled conservatism, or even a charismatic populism. It’s an opportunism that tells people what they want to hear. He excels at sniffing out your real interests, the ones lurking behind your positions, and exploiting them.

Which should be telling. Trump has, with frightening accuracy, tapped into the nativism, ignorance and yearning for authoritarianism that has for decades nourished the Republican Party like a subterranean spring.

As Dan Carter recently pointed out in The New York Times, the last time these elements had their own nominee was in the era of George Wallace, who won five states in 1968 as a third-party candidate. That’s when Richard Nixon and his team developed the so-called “Southern Strategy” to attract disaffected, working-class white voters — the “Dixiecrats” who had voted Democrat until the party embraced the civil rights movement — with racial dogwhistling and revanchist patriotism.

This was never as overt as it is with Trump. Jason Sudeikis’s Mitt Romney nailed it perfectly on “Saturday Night Live” when he said: “We don’t say racist and sexist things. We imply them, subtly, over decades.” Think Willie Horton, welfare queens and the War on Drugs, with its disproportionate impact on urban populations. Trump-as-Ahasuerus has uncovered what was conveniently beneath the surface all these years.

Really, the Republican party is three parties: reasonable fiscal conservatives and foreign policy hawks; the Christian right, and the angry and ignorant white voters who made up the Tea Party followers and whom the Trump base now comprises. All three constituencies are required for the GOP to be a national party; until this year, the latter two had just been kept on a leash.

Republicans are not all racist. But they would never have won a national election without the support of racists.

Who are these people? They are the 20% of Trump voters who think freeing the slaves was a bad idea. They are the 43% of Republicans who believe President Obama is a Muslim. And without them, the GOP is a minority party at best.

That’s why, to all the gnashing of teeth at the Republican Jewish Coalition, I say: You’ve brought this on yourselves. For decades, mainline Republicans like you have made a deal with the Christian right and the know-nothings. You’ve thrown them bones; they’ve fallen in line.

But in the age of Twitter and Breitbart, the lunatics whose support you depended on all these years have now taken over the asylum. This is the flame of American hate that you have stoked, subsisted on and exploited all these years. It isn’t you, but it’s what made you possible. And now they are out of your control. Trump’s supporters aren’t responding to him — he’s responding to them. Which is why Ahasuerus is more insidious than Haman: Haman reveals his own evil, but Ahasuerus reveals ours.