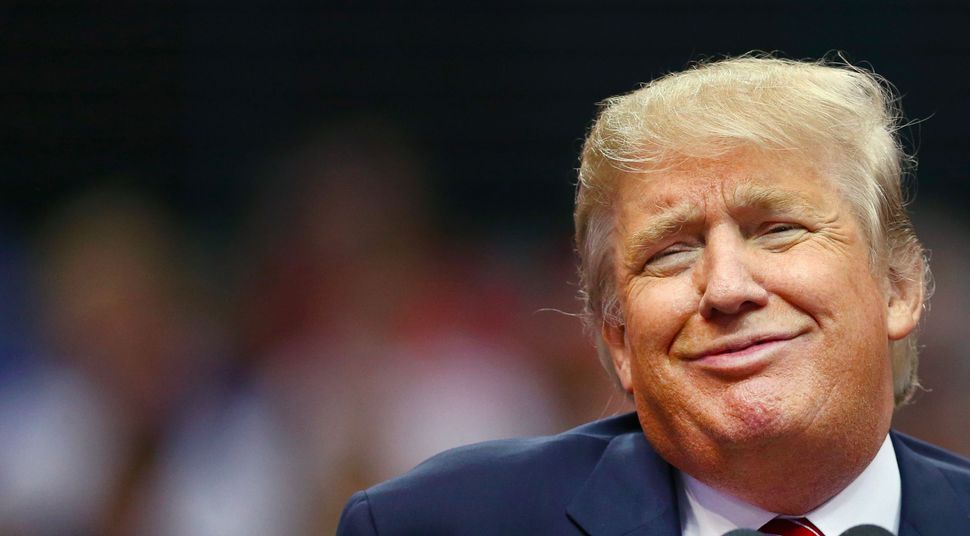 While Jews ardently dispute whether AIPAC should have invited Donald Trump to speak to their Washington conference, that particular die has been cast. The invitation went out.

So Trump — the loudest, most poisonous, nativist, mob-arousing, bigoted public person that America has yet produced in this century — is going to stand at the rostrum of a major gathering of one of America’s most tolerant minorities. My guess is he’ll play nice. I’d lay odds that the country’s prime exponent of banging heads and hating the stranger will toss out a few phrases to suggest that he really does know how to play well with others and that he is the greatest lover of Jews who ever lived and that he will carpet-bomb anyone who ever looks cross-eyed at a Jew.

He will thread these remarks throughout yet another nasty, ill-informed statement about matters he does not understand and does not particularly want to understand (for he’s so smart he doesn’t need to understand), a statement that he will amplify, or back away from, or otherwise contradict when it seems to him convenient to do so.

Once more, he will stick out his jaw and urge the gullible to ignore some of his most loathsome bombast. He will blame the dread liberal press for distorting his kindness. He will assure AIPAC that Jews are amazing, they are the greatest, they make the best deals, that he will make sure Jews get the contracts to build the Mexican wall, that the Jews have demonstrated how strong a wall can be and how great it can look. Whatever.

Whether or not AIPAC should have invited him in the first place, the expected 18,000 Jews who attend face a moment of truth. Will they sit respectfully before a bullying, insulting, authoritarian ignoramus whose most memorable saying is “You’re fired,” as if the man is just another politician out on the hustings?

Forward editor Jane Eisner has offered a fine list of on AIPAC’s stage. I commend her list and wish to add two gentle suggestions:

• Walk out. Silently. Rabbis first. Wear tallit, robes, or other signs that you have been designated leaders. Show that you are actually leaders rather than sheep. You’ll get, from the news cameras, the attention that you deserve. For the rest of America, you’ll supply a teachable moment.

• Stand up if you don’t want to walk out. Turn your backs on him. Say nothing. Shout nothing. Witness on behalf of what American Jews stand for. Just stand there. Do not stomach this disgrace. Show that there is some bombast you will not swallow.

Todd Gitlin, Professor of Journalism and Sociology and Chair of the Ph.D. Program in Communications at Columbia, and an Honorary Professor at Ben-Gurion University of the Negev, is a board member of Partners for Progressive Israel and a columnist for Tablet.