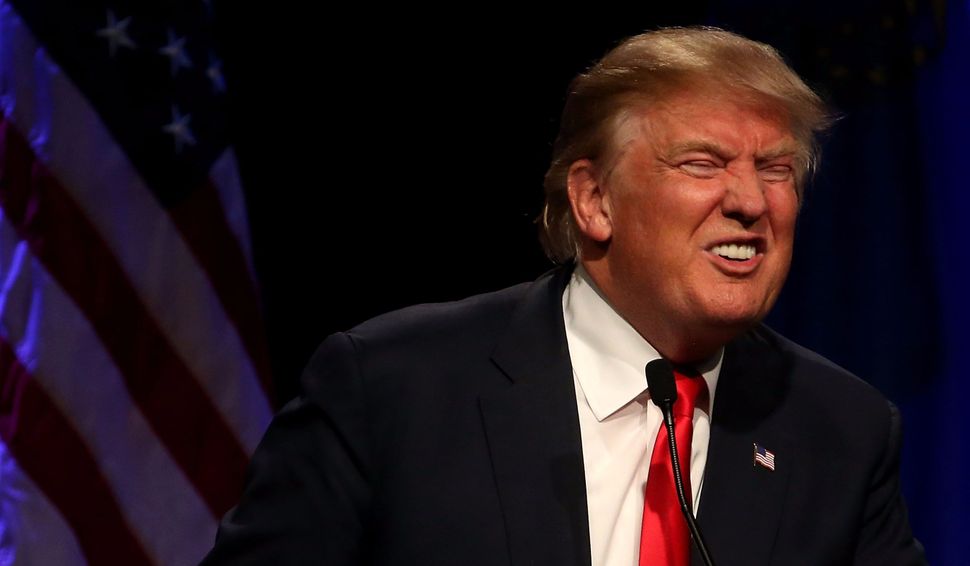 Many AIPAC supporters are shocked that the policy conference has invited Republican front-runner Donald Trump to be a speaker this year. I’m not. In fact, I think Trump and AIPAC are a great shidduch.

Far from being a deviation from AIPAC’s norm, this invitation is perfectly emblematic of their strategy. Anyone who’s been watching AIPAC closely should see that.

I grew up in a Jewish community where participating in AIPAC was as sacred a duty as going to synagogue. I attended the conferences and leadership training. Over the years, however, it has become clear to me that for the sake of being “pro-Israel,” AIPAC has asked American Jews and our allies to check all our other values at their door. Hosting Trump is simply the latest and most egregious example of what happens when a major Jewish organization puts its narrow agenda above Jewish values like equality and freedom.

AIPAC takes pride in being a bipartisan organization whose sole mission is to strengthen the U.S.-Israel relationship. But for years, this rhetoric has masked a more complex reality: that AIPAC consistently supports dangerous policies from an extreme right-wing Israeli government, regardless of their moral implications.

While AIPAC claims it only promotes consensus issues, in practice the organization has lobbied hard for hawkish positions that support the ongoing occupation, expansion of settlements and the 2014 assault on Gaza, . Members of Congress know that speaking out against these policies is guaranteed to jeopardize AIPAC’s support.

Last March, when Israeli Prime Minister Benjamin Netanyahu flew to Washington to denounce the Obama administration’s diplomatic initiative with Iran, AIPAC called his message “critical” and celebrated the “overwhelming bipartisan attendance,” while ignoring the deep insult to the White House and the fact that 58 members of Congress skipped his speech in protest. This summer, AIPAC went head to head with President Obama and a diverse progressive coalition, spending over 20 million dollars to fight the Iran deal. They lost big as the deal passed with broad support from Americans, American Jews and even the Israeli security establishment — and they made clear that they are willing to side with hawkish Netanyahu-inspired policy over their own administration’s.

This year’s policy conference is an attempt to resuscitate AIPAC’s lost veneer of wide support. The conference’s slogan, “Come Together,” is a clear statement of their commitment to a false unity over values. One of this year’s major lobbying asks is to make boycotting settlements illegal, a blatant silencing of dissent and further attack on the American administration’s longstanding anti-settlement policies.

Enter Trump, whose racist policy proposals and fascist-style rhetoric have earned him condemnation from across the American political spectrum and the Jewish world, including the Reform Movement, Reconstructionist Movement, J Street, Ameinu and the Anti-Defamation League (though the ADL has yet to comment on the candidate’s appearance at AIPAC).

In recent weeks, Trump has called for banning all Muslims from the country, creating a registry of religious minorities, inciting violence against political opponents, and a policy towards refugees so cruel that, had it been in place in the 1930s, many of our grandparents would never have set foot on U.S. soil. Apparently none of this troubles AIPAC enough to warrant a condemnation.

Forward columnist J.J. Goldberg may be right that AIPAC’s legal not-for-profit status mandates that they remain open to all active candidates, and surely some feel that there should be a forum for every potential president to state her or his position on Israel. But AIPAC’s refusal to acknowledge the moral implications of this invitation, and their swift move (even if it was later disavowed) to bully into silence potential protests at the conference, signals a dangerous acquiescence to his politics.

Trump speaking at AIPAC is not an anomaly; it’s the logical conclusion of the systematic abandonment of values that AIPAC has propelled in our community. The same thinking explains why, over the years, they have hosted Islamophobes and people like Naftali Bennett, who supports settlements and the erosion of Israeli democracy and opposes the two-state solution. The animating ethos is “That’s not our problem.” So it doesn’t matter if Trump is racist and misogynistic. It doesn’t even matter if he holds base anti-Semitic ideas about Jews and our money: AIPAC doesn’t care as long as he will maintain unquestioning U.S. political and economic support for an Israeli government that is leading Israelis and Palestinians down an increasingly destructive path. This is a vision of security for those with power, at the expense of everyone else on the margins. Jews should know better.

Speakers at AIPAC consistently bring up the rise of Hitler and Nazism in talking about threats to Israel. They warn that we must learn from history. So why does AIPAC feel no responsibility at all to speak out about a violent, hateful demagogue who people across the board have likened to Hitler and who has a real chance of taking charge of this country?

American Jews of conscience who want to walk out on Trump: It’s time to recognize that the same values you abhor — the Islamophobia, support for building big walls, indifference to human rights, bullying of opponents — are the same values that have been given a platform for years at AIPAC. How many missteps does the lobby have to make before you walk out for good?

Those who want to dump Trump should dump AIPAC along with him.

If you do, you will be greeted outside by hundreds of us who are no longer willing to check our values at our community’s door. I am helping to organize a group of young Jews who are so passionate about this cause that they’re devoting their weekend to driving from New York City to Washington to protest at the AIPAC conference. And even more protesters will come from within Washington itself. Together, we’ll show how much our values mean to us — and how hard we’re willing to fight to keep them.

Simone Zimmerman is an activist and organizer based in Brooklyn. She is a leader of IfNotNow, an emerging movement of young American Jews working to end their community’s support for the occupation. Follow her on Twitter @simonerzim