5 Cringeworthy Things Donald Trump Has Said About the Jews 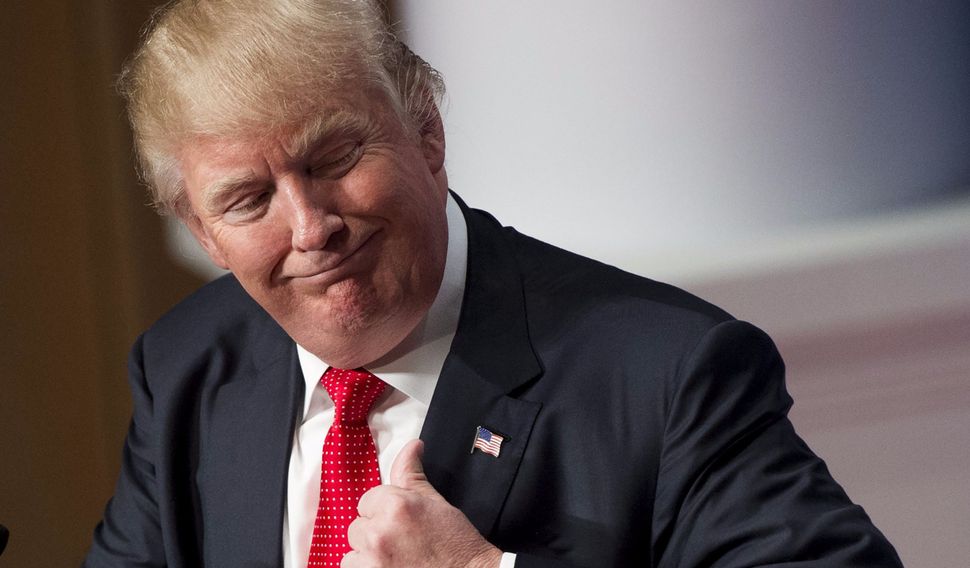 Well, it had to happen. Today was the day the Jews got their turn with The Donald.

Republican frontrunner Donald Trump, a self-proclaimed BFF of Israel, came off as anything but mishpocheh when he started talking about the chosen people, money and the art the deal at the Republican Jewish Coalition conference Thursday in Washington.

As soon as Trump started talking, social media exploded with accusations of stereotyping.

Here’s what he said today, plus four other cringeworthy comments about the Tribe from the past.

2) One of My Favorite Daughters is Jewish

“I want to thank my Jewish daughter. I have a Jewish daughter…This wasn’t in the plan but I’m very glad it happened.” (The Algemeiner’s ‘Jewish 100′ at Capitale. Feb. 2015.)

3) How ‘Bout That Jon Leibowitz — I Mean Stewart

“I promise you that I’m much smarter than Jonathan Leibowitz – I mean Jon Stewart @TheDailyShow. Who, by the way, is totally overrated.” (A tweet about Jon Stewart in April 2013.)

“This is a woman that is a terrible person,” Trump said of Democratic National Committee Chairwoman Debbie Wasserman Schultz after calling her “crazy” and a “highly neurotic woman.” (Last month on Breitbart News show on Sirius XM Radio.)

5) Not That I’ve Actually Read Hitler…

“If I had these speeches, and I am not saying that I do, I would never read them… My friend Marty Davis from Paramount gave me a copy of Mein Kampf, and he’s a Jew.” (Trump’s response in a 1990 profile on whether he read Hitler’s writings.)

(Marty Davis is not Jewish)

You have to give plaudits to Donald Trump for chutzpah. Who else gives a border line anti-Semitic speech at the Republican Jewish Coalition?

“I’m a negotiator, like you folks” — Trump. You know, because Jews love to haggle.

5 Cringeworthy Things Donald Trump Has Said About the Jews