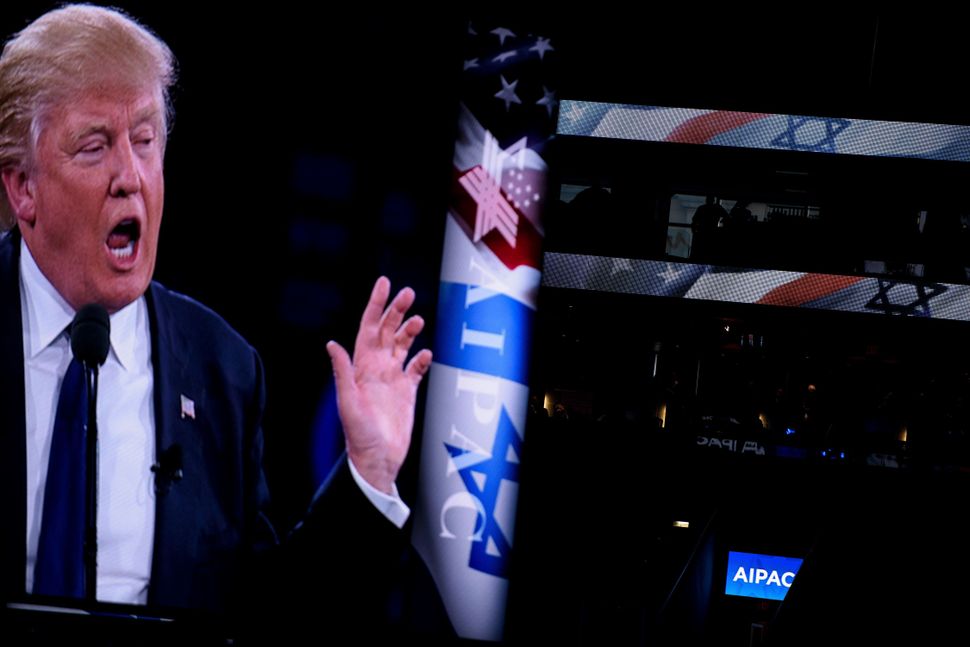 The AIPAC crowd gobbled up the red meat Trump tossed them. Image by Getty Images

So, what kind of American Jewish community do we want to be?

I ask myself that question after the drama over Donald Trump’s speech at the American Israel Public Affairs Committee’s annual conference. How it is answered may come to define us during this tense and trying election season.

We could be the community that gives a thoughtful reception to a diversity of voices but doesn’t fail to stand up to bigots and bullies.

Or we could cheer what fits into only a narrow prism of self-interest, and disregard how our values shape our interactions with the rest of the world.

The first choice fills me with pride, the second with shame. Both were on display at AIPAC.

Listening to presidential candidates address the convention is bound to give anyone a case of vertigo, and this year was no exception. Republican or Democrat, the candidates haul out the same clichés to prove their devotion to the State of Israel. It’s a stage built for pandering and hyperbole, and that’s okay. That’s part of the show, and since the mission of a political lobby is to excite the faithful, the over-the-top rhetoric serves its purpose.

My personal discomfort with Trump’s speech wasn’t just with what he said, though his remarks were filled with distortions, complete turnarounds, ignorant boasts and the other unbelievable stuff we’ve come to expect from this most unexpected presidential candidate.

No, my discomfort — in truth, my shame — was with the reception he received. The applause began after he uttered his very first sentence. It didn’t take long until some in the crowd were standing and clapping. And when he threw the red meat that he brilliantly feeds to his other crowds, there were cheers as the audience gobbled it up.

Trump aroused this AIPAC audience with the same tactics he uses to galvanize voters in his march across the scorched earth of today’s Republican Party. It’s not what many of us had hoped would happen. It’s not what should have happened.

We know that some rabbis and other leaders of conscience — Reform, Conservative, Orthodox, whatever — boycotted the speech or listened to it silently, to distance themselves from the ugly rhetoric and divisive policies that Trump espouses. Unfortunately, this dignified approach did not draw a large crowd.

Instead, the optics from the hall that night beamed a different story. Wedged between House Speaker Paul Ryan and GOP rival Sen. Ted Cruz, Trump received the legitimization he craved. His sweeping criticism of the Iran nuclear deal riled up the crowd. His mean takedown of President Obama — “He may be the worst thing to ever happen to Israel” — was astonishingly disrespectful.

I am relieved that no one in the crowd disrupted his speech; that would have been counterproductive. But did they have to clap and cheer? Did it deserve a standing ovation?

Just for the record, Trump’s characterization of the Iran deal was, in parts, flat-out wrong. So was his declaration that Israel has been treated like a “second-class citizen” during the Obama administration. In fact, bilateral aid increased dramatically and missile defense funding jumped to three times the amount it was when George W. Bush left office.

Israel receives far more aid, under better conditions, than any other nation. Earlier that very day, Trump told a press conference that he expected Israel to return some of the $3 billion in military aid it received from the United States in the past year alone. He neglected to say this at AIPAC.

Likewise, in his AIPAC speech, Trump completely abandoned his former pledge of “neutrality” as if he never uttered the words. He declared himself in favor of moving the U.S. Embassy to Jerusalem from Tel Aviv, when last December he was booed at the Republican Jewish Coalition for refusing to take a stand on that same issue.

But lies, half-truths and bald inconsistencies somehow do not blemish this candidate, or embarrass him. Somehow, the only policy statements he won’t retract are his pledges to immediately deport millions of Mexicans and to ban Muslims, and his sneering comments about women, the disabled, military veterans, political rivals, former presidential candidates and really anyone who dares to disagree with him.

Visibly stung, AIPAC leadership tried valiantly to counter that image the next morning, when Lillian Pinkus, the newly installed president, took the stage to read a prepared statement of apology with a voice alternately pleading and contrite. She expressed regret to Obama for Trump’s attack and the loud applause it received.

“There are people in our AIPAC family who were deeply hurt last night, and for that we are deeply sorry,” Pinkus said. “We are deeply disappointed that so many people applauded a sentiment that we neither agree with or condone.

“We say, unequivocally, that we do not countenance ad hominem attacks, and we take great offense to those that are levied against the president of the United States of America from our stage.”

I was proud of Pinkus’s statement, but it will take more than one apology, no matter how sincere, to repair the damage done by Trump’s deplorable words and to negate the glee with which they were received. This challenge goes well beyond the debate within AIPAC over Israel policy to the fundamental question of what kind of community we want to be. I hope we will continue to be the people who stand up to bullies and bigots, because to do anything less would be deserving of shame. And we’ve already had enough of that.