‘Bernie or Bust’ Is Self-Indulgent, Stubborn — and Dangerous 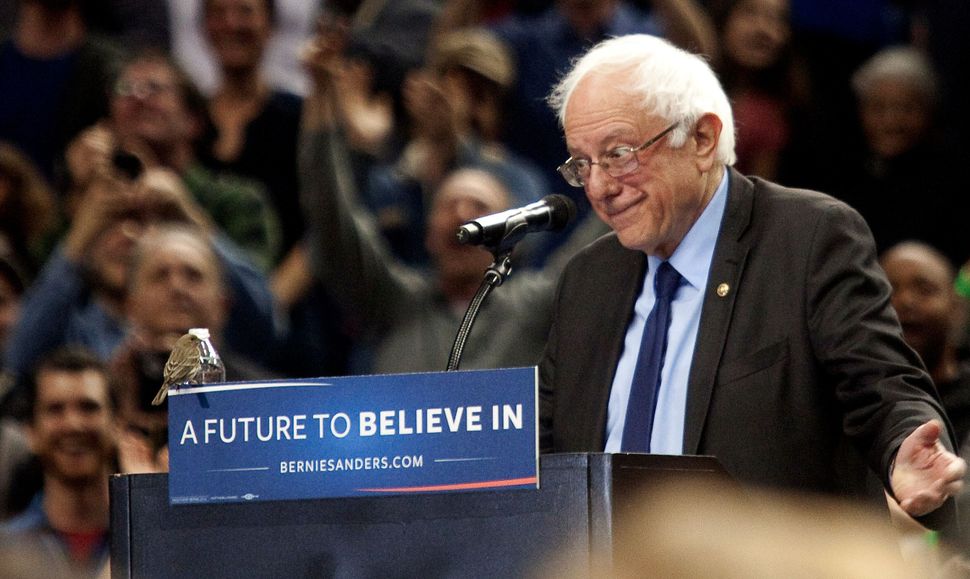 There’s a strikingly cyclical pattern to the Bernie Sanders campaign. It’s a continual series of boom-bust mood swings. Euphoria alternates with anxious bravado as huge wins are followed inexorably by huge losses. One week Sanders is unstoppable; the next week he’s toast. And repeat.

For a while the mood cycle had a certain exhilarating appeal for the fired-up liberals among us. Lately it’s becoming dangerous. Over the past few weeks a sort of movement has emerged of Sanders fans threatening — sometimes pledging — not to vote for Hillary Clinton in November, should she win the Democratic nomination. Their slogan: “Bernie or Bust.”

Each upswing, it seems, has brought Sanders’s fans a little higher. Each subsequent downswing left them just a little angrier, until more than a few decided he was, if not inevitable, then necessary. The more necessary he became, the more unacceptable Clinton became.

The danger, of course, is that if enough potential Democratic voters are convinced to sit out a Clinton candidacy, we just might end up with a President Donald Trump. Result: mass round-ups of immigrants, chaos in NATO and the broader alliance of Western democracies, plus a vindictive, narcissistic crybaby with his finger on the nuclear button.

True, current polls consistently show Clinton beating Trump by respectable margins. But those polls are all based on the assumption that Democratic turnout remains steady. None of them accounts for the possibility that a significant number of Democrats might sit it out. Besides, the same polls show Clinton losing to John Kasich and only narrowly beating Ted Cruz.

Even if the Republican establishment manages to derail Trump in convention maneuvering, a November GOP victory would still be a liberal-progressive nightmare. Start with defunding Planned Parenthood, declawing the Environmental Protection Agency and the National Labor Relations Board, and repealing Obamacare, which throws the health care system into chaos. Watch income inequality enter hyper-drive as federal budgets gut safety nets, cut taxes on the rich and pile new fees and burdens on the poor.

Next thing you know, you’ve got a Supreme Court set for a generation to restrict or outlaw abortion, eliminate campaign-spending laws, legitimize voter-restriction laws, cripple what’s left of affirmative action and declare open season on prisoners’ rights and criminal justice reform. Worst of all, you’ve got a halt in America’s all-too-limited efforts to stem climate change and keep the planet suitable for human habitation.

There have been murmurs along these lines since last year. A website called Citizens Against Plutocracy launched a Bernie or Bust signature campaign in September; signers pledge to write in Sanders’s name or vote for the Green Party. By mid-March it reportedly had 60,000 sign-ups.

A breaking point came in the quick succession of Rust Belt primaries — first Sanders’s against-the-odds March 8 win in Michigan, followed a week later by his losses in Ohio, Illinois and Missouri. Michigan told Sanders’s backers he could reach past his liberal base and win in the postindustrial Midwest, heartland of the white working class, Holy Grail of American socialists since the days of Joe Hill and Eugene Debs. A week later, Ohio, Illinois and Missouri seemed to tell them that no, actually, he couldn’t.

In defiance, Bernie or Bust is now picking up steam. Once limited to scattered pronunciamentos on the far left, it’s begun appearing regularly in mainstream liberal forums like The Huffington Post and Rolling Stone. Salon.com, an informal home base, ran at least four separate Never-Hillary-themed essays (here, here, here and here) in a single week in late March. Complaints range from her Goldman Sachs speaking fees to her 2003 Iraq War vote, her alleged ethical lapses, her (husband’s) neoliberal economics and her warlike foreign policy — President Obama’s policy, it’s often forgotten — as secretary of state.

In the past few days the movement’s cresting has produced its first celebrity spokespeople. Camille Paglia, the iconoclastic feminist social critic, wrote in Salon on March 24 that she would “never cast my vote for a corrupt and incompetent candidate whose every policy is poll-tested in advance.”

Four days later, Oscar-winning actress Susan Sarandon blew up the Internet with her hedged endorsement of Bernie or Bust in an interview with MSNBC’s Chris Hayes. She said she’s “going to see what happens” before deciding whether to support Clinton in the end.

Pressed by Hayes, she added, “Some people feel that Donald Trump will bring the revolution immediately if he gets in, things will really explode.” Hayes asked Sarandon if she didn’t think that’s “dangerous.” Her answer: “It’s dangerous to think that we can continue the way we are, with the militarized police force, with privatized prisons, with the death penalty, with the low minimum wage, threats to women’s rights, and think you can’t do something huge to turn that around.” All of which, incidentally, Clinton opposes as strongly as Sanders.

Sanders himself hasn’t come close to such brinksmanship. His calls for a “political revolution” are aimed at engaging the politically disengaged in public affairs, hoping they’ll pressure Congress to enact his reforms. Decades ago he touted violent revolutionaries like the Sandinistas in Nicaragua, but since then he’s dialed back to a mild, European-style social democracy. Besides, he’s noted, Clinton was once a Goldwater Republican. Today the two are closer to each other than either is to their youthful excesses. And, as Sanders has insisted repeatedly, either would be much better for America and the world than any of the Republicans.

Sanders’s strongest argument against Clinton is that polls show him performing better against a Republican candidate: He’d beat either Cruz or Kasich. If polls were predictions — and anything can change between now and then — they’d be a strong argument for Democrats to nominate Sanders over Clinton. Alas, it’s almost certainly too late. Despite his growing momentum, the remaining primary map is stacked overwhelmingly against him.

What’s left is this: Clinton’s weakness in the polls is all the more reason for Democrats, liberals and progressives to go all out for her. Whining about her weaknesses can only depress November turnout and hand Washington to the GOP, lock, stock and barrel. Anyone who cares about women’s health, immigrant rights, economic fairness, racial justice or — how to put this? — the survival of the planet should do everything possible to turn out the vote. Precisely because she’s not as strong or, yes, as honorable a candidate as Sanders, she’ll need all the help she can get.

‘Bernie or Bust’ Is Self-Indulgent, Stubborn — and Dangerous