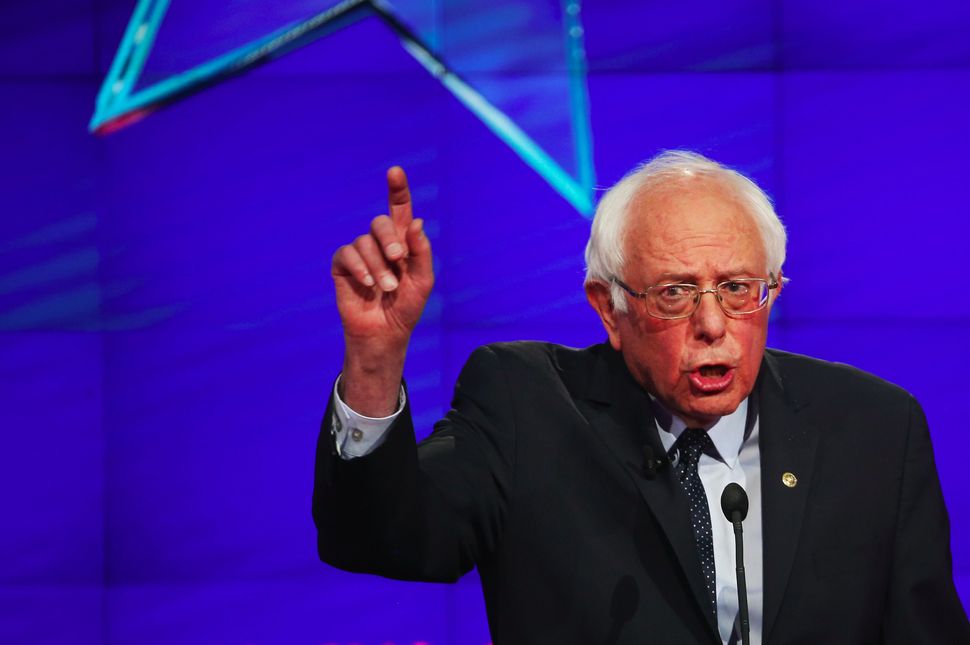 University of Wisconsin Professors Vernon Allen and John Levine conducted a series of experiments in the late 1960s to examine psychologist Solomon Asch’s theories about conformity and the influence of social forces on individual opinions. They found that even one dissenter from supposedly unanimous views enables others to express their opinions more freely.

Liberals and leftists hope Bernie Sanders’ statements at Thursday’s Democratic debate will have a similar effect and will pave the way for greater dissent from America’s “automatic support” for Israel.

Sanders’ words, it should be noted, would hardly merit a yawn in Israel’s Knesset, at least in years past: Israel used too much force in Gaza, the Palestinians deserve justice and dignity, Benjamin Netanyahu isn’t always right – these statements are rather mundane in Jerusalem. But in a U.S. election campaign, a few days before primaries are held in New York with its multitudes of Jews, Sanders was seen as the boy in the Emperor’s New Clothes.

“Sanders broke the status quo” one headline blared; history, it seems, would never be the same.

Sanders’ words may have been courageous, but they were hardly unprecedented: in 2003, another Democratic candidate, Howard Dean – also a liberal from Vermont – deviated slightly from the acceptable party line on Israel. At the height of the second intifada and the suicide bombings in Israeli cities, Dean said Washington needed to be even-handed and shouldn’t take sides. He was overwhelmed by a tsunami of criticism from the Democratic Party and from rival presidential contenders John Kerry and Joe Lieberman. Many observers believe that this was one of the reasons for Dean’s rapid fall from front-runner status to oblivion.

Since then, presidential candidates have been careful to sympathize with Palestinians only after they enter the White House.

Until the campaign moved to New York, Sanders had also avoided talking about the Israeli-Palestinian conflict: he seemed to view the topic as a minefield from which he would not escape unscathed. But his miserable interview to the Daily News, in which he erroneously said that 10,000 Palestinians had been killed in the 2014 war in Gaza, brought the issue to the fore and turned Sanders into a punching bag for right wing politicians in the Israel and the United States. Sanders must have expected the issue to be raised in Thursday’s debate, but unlike Dean, who had tried to extricate himself from his mess by depicting himself as an Israel right-or-wrong super-hawk, Sanders decided not only to stick to his guns, but to open fire on Clinton for her AIPAC speech and her blind support for Israel.

This was perhaps the most telling moment of the debate, which pointed to the fundamental changes that have occurred in the Democratic Party. Instead of savaging Sanders for his “despicable” attempt to turn Israel into a wedge issue that would divide the Democratic Party – as Lieberman accused Dean of doing – Clinton preferred a defensive mode. She pointed to her own record of sympathy for the Palestinians and hinted at her harsh criticism of Netanyahu in their private conversations when she was secretary of state. She preferred to lower the tone and cut short the discussion rather than risk an outright clash in which she might also be injured.

Clinton’s apprehension is undoubtedly tied to the fact that Democrats who participate in primaries are particularly ideological and more liberal this year than ever before. It is in this group of liberal Democrats that support for Israel has withered the most, especially since Netanyahu’s controversial speech to Congress in 2015. When Dean broke ranks, then-Majority Leader Nancy Pelosi sent him a stinging rebuke. She probably won’t do so today, given her reaction to Netanyahu’s speech on the Iran deal, which she described as “an insult to intelligence” that had brought her to tears.

Sanders may have had another motive: to defuse growing criticism from his fans of his campaign’s decision to suspend Simone Zimmerman, who had just been appointed as his Jewish Outreach Director. In an incident which reminded Israelis of Netanyahu’s inability to appoint a spokesperson because of his offensive Facebook posts against U.S. President Obama, Sanders had to let go of Zimmerman, a former J Street U president and founder of the “If Not Now” anti-occupation movement, for her own offensive Facebook post against Netanyahu. Sanders came under heavy pressure from recognized Jewish figures, and his fans were outraged at what they described as his capitulation.

The Zimmerman affair has now been effectively overshadowed by the glowing reports on the debate that depict Sanders as super-hero Samson who took on the entrenched Democratic empire. He was lauded by Palestinian activists and leftist commentators, both Jewish and non-Jewish, and met by a deafening silence from the Jewish establishment. Perhaps that will change in the coming week.

It’s not clear that the affair will have any influence on the actual outcome of the New York vote or on Clinton’s advantage in the polls over Sanders among Jewish voters, but it has certainly bolstered the Vermont senator’s standing among critics of Israel. Nonetheless, Tuesday night’s results will have the final say on whether Sanders will be perceived as having changed the conversation: if he loses by a wide margin, the outcome will be interpreted as a rejection of his non-conformist views. A win, on the other hand, will be viewed as historic, but not just for the future of U.S.-Israeli relations.