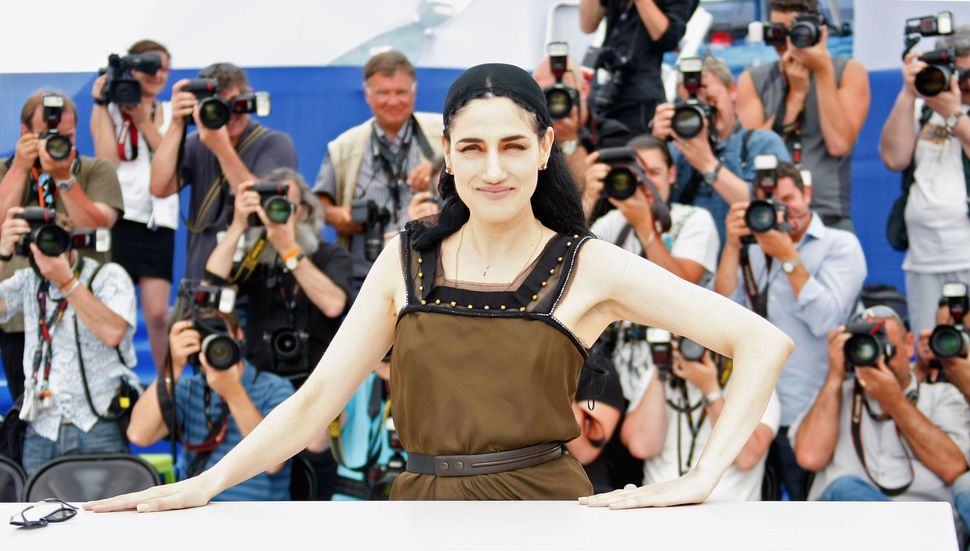 The first time I saw Ronit Elkabetz in a movie, I didn’t find her beautiful. Her striking, sharp features seemed too strange and dark. And her intensity made me uncomfortable.

A high school student at the time and an aspiring actress (a regrettable phase), I had bought into the beauty ideals the Israeli media had sold me: blond, blue eyed, fair and Ashkenazi. Elkabetz, born into a working-class Moroccan household in Beersheba, didn’t fit the bill. In fact, she didn’t fit any bills. Her presence was almost too much, too intense, too great, larger than the confines of the Israeli screen.

Over the course of her career, as Elkabetz became a giant of Israeli cinema, winner of three Ophir prizes (the Israeli Oscars), and a successful, beloved actress in France, I fell in love with her, as did the rest of the world. There was no one like her on the Israeli screen: Her raspy voice, both a roar and a whisper, her unapologetic sex appeal, and her emotional intensity and vulnerability made her mesmerizing to watch. “She was our Garbot and Dietrich,” film critic Uri Klein said in a eulogy in Haaretz.

But for me, and for many women in Israel, Mizrahi women especially, she was so much more than that. A brilliant filmmaker and artist, and a Mizrahi feminist activist — for the past five years she had been the president of Achoti, Israel’s leading Mizrahi feminist organization — Elkabetz was a role model and an inspiration.

Growing up, most Mizrahi characters I saw in cinema were in “Bourekas films,” slapstick comedies of little substance displaying a myriad of ethnic stereotypes and catering to the lowest common denominator. In those films, Mizrahi characters were nothing more than caricatures, ridiculed for their accents for the sake of comic effect. Mizrahi women in those films were equally clichéd: warm and loving, family oriented, great housewives.

Elkabetz created Mizrahi women who were complex and compelling and dignified, even in their weaknesses, and she fueled those roles with her fire, passion and totality. She was a struggling divorcee and diner owner in a forsaken desert town in the internationally acclaimed “The Band’s Visit,” and an aging prostitute and a single mother in “Or” (winner of the Camera d’Or at Cannes). And in her celebrated trilogy, which she co-wrote and co-directed with her brother, Shlomi Elkabetz, based on their parents’ marriage, and whose last installment, “Gett,” was nominated for a Golden Globe Award, she took on the injustices of rabbinical laws in her portrayal of Viviane Amsalem, a hairdresser and a mother of four trapped in an unhappy marriage.

Through these roles, Elkabetz offered Mizrahi women an honorable place in Israeli cinema and an honest representation to which they could relate. In her accomplishments, she gave young Mizrahi girls permission to dream big, to aspire to greatness, to follow their hearts.

In addition to her many films, which I, for one, am going to re-watch over the next few days, Elkabetz left her many fans two final humble gifts, reminders of her spirit and great integrity.

One is a video, taken a couple of months ago when Elkabetz appeared on Israeli television to speak of her recent appearance in the French TV show “Trepalium,” where she plays France’s prime minister. The young, male, Ashkenazi interviewer asked Elkabetz to explain how on earth she was chosen for such a role. Then he asked her to weigh in on a recent scandal in Israeli cinema regarding a famous actor accused of sexual harassment. Elkabetz, regal and composed, refused to answer, reprimanded the reporter, and then got up and left. It was a rare display of uncompromising integrity, the kind of dignity and truth she had brought into her work and into her life.

The second offering can be found in these words, written six weeks ago for International Women’s Day and published in Yediot Aharonot, words that may now become her legacy: “I know how to be loyal to myself. That’s what I know… To go all the way, to fight, to not minimize my essence… The day I understood that as a human, a woman, a creative person, I won’t go anywhere without my heart, without that energy that asks me to move forward and above mediocrity, I realized I was free.”

Ayelet Tsabari is the author of the story collection “The Best Place on Earth,” winner of the Sami Rohr Prize for Jewish Literature.