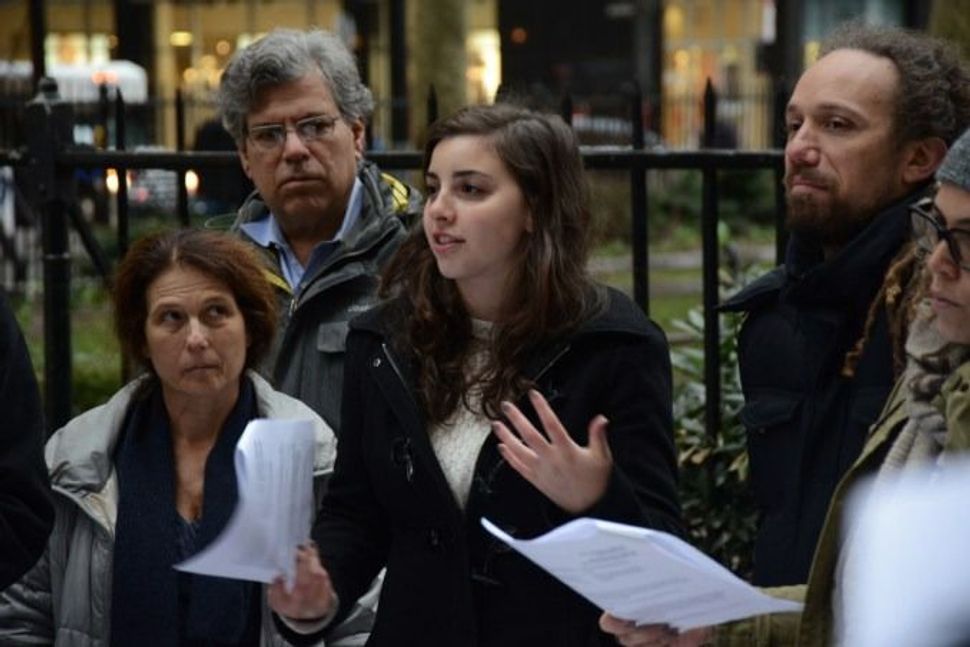 Simone Zimmerman had to be suspended.

Not that I have any problem with her passion. Or, truth be told, with most of her politics. And certainly it’s hard not to be impressed by Zimmerman, the brilliant and eloquent organizer, a driving force within J Street U and IfNotNow, still in her mid-20s. (I wish Zimmerman had been a student on campus when I was a Hillel rabbi, ten years ago, when we were saying the names of Palestinian and Iraqi civilians before the mourner’s kaddish.) It’s a testament to what she’s accomplished as an activist that she was tapped by a national presidential campaign to do high-profile Jewish public outreach work.

So was her suspension an act of cowardice by the Sanders campaign? Was it, as some have claimed, a punishment by American Zionism for challenging its lies? Did she pay the price for daring to depart from the American Jewish establishment’s positions on Israel? Was she the victim of a witch-hunt?

I don’t think so. The Sanders campaign certainly knew her politics when they hired her. For the campaign to make that hire, considering the reluctance of so many American Jewish institutions to criticize Israeli state policy, was an act of great courage. But to hire someone with such a fiery spirit to do public outreach was probably an act of great foolishness.

The truth of the matter is that while I agree with much of her politics, Zimmerman wasn’t hired to advise Sanders on his Mideast policy. As “Jewish Outreach Coordinator,” Zimmerman was hired to do public relations. By definition, her job was to create a favorable public image for her candidate within the Jewish community.

That job was compromised the moment it was revealed that she was the author of Facebook posts calling out Israeli Prime Minister Binyamin Netanyahu, asserting that he “sanctioned the murder of over 2,000 people.” Whether or not you agree with her assessment, that’s some seriously inflammatory rhetoric.

Consider the optics. How do you reach out to Jews, and at the same time call a major Jewish leader a murderer? It doesn’t look right.

And so Zimmerman had to go.

But here’s the thing: By that same logic, the Palestinian occupation must end. Israel is a country, but it’s not just a country. It’s a symbol of Jewish pride, a tribute to Jewish valor, and — we pray — a representation of Jewish morality. To millions of Jews all over the globe, Israel has a higher purpose. Its job is to be a unifying force of pride and honor. In other words, like Simone Zimmerman, Israel is an outreach coordinator.

To maintain military control over another people, with another set of laws — not for five or ten years, but for almost fifty years — undermines Israel’s image as a force for peace, justice and righteousness. The oppression of the Palestinians, the endless narrative of house demolitions, the humiliating checkpoints and the acts of unspeakable brutality overshadow so many of Israel’s remarkable accomplishments. Jews, especially young Jews, are left disaffected, demoralized and ashamed.

Again, consider the optics. How do you reach out to Jews in the capacity of a bastion of Jewish values, and at the same time keep millions of people subjugated under Jewish rule? It doesn’t look right.

In a fascinating profile on the American Jewish Peace Archive website, Zimmerman describes arriving on the UC Berkeley campus and immediately immersing herself in the “Israel advocacy scene.” A child of USY and Ramah, a Jewish day school and high school graduate, Zimmerman was no wide-eyed ingénue. She was a dedicated pro-Israel activist, a bright and committed Jew. But the discovery of the grim reality of Palestinian life shook her to the core. When she sought comfort and understanding from a family friend, he admitted, “To be honest with you, I try not to look.”

Increasingly, young Jews are looking. And they don’t like what they see. If we want the next generation of Jews to love and support Israel, the occupation must go.