68 Reasons To Respect, If Not Love, Israel On Its 68th Birthday 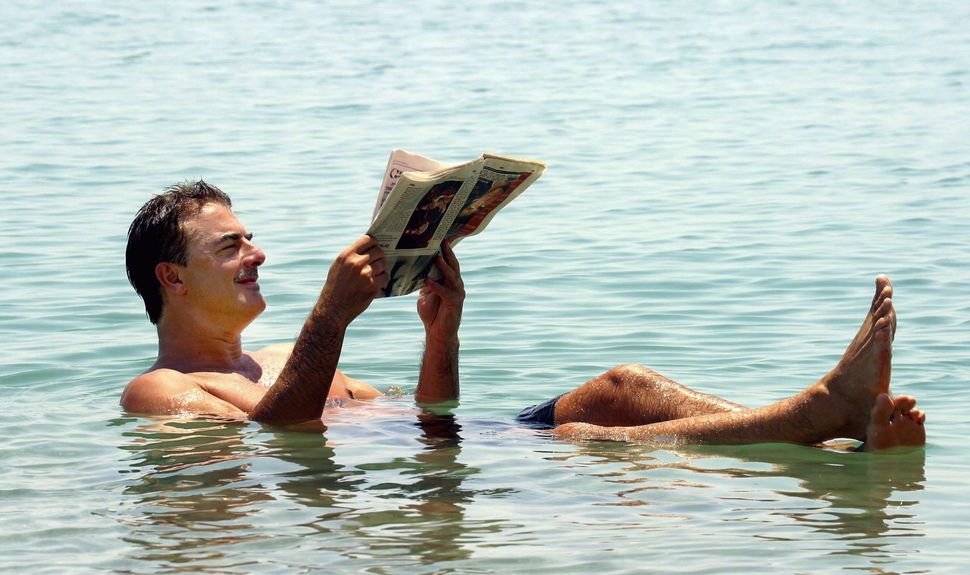 This week, as Israel celebrates the 68th anniversary of its hard-won independence, it’s worth celebrating the unlikely success story of this embattled little country, amid all its imperfections.

Like other countries, Israel is a work in progress. Blemishes abound and Israelis are the first to criticize and question their own shortcomings: political corruption, a dysfunctional electoral system, the extortion and blackmail of the ultra-Orthodox parties, the rampant economic iniquities, the status of Israeli Arabs, the treatment of Ethiopian immigrants, the situation of Palestinians in the West Bank, the plight of African refugees. The problems are longstanding and a searing indictment of Israeli leadership.

But show me another country on the planet that, within such a relatively short time and against such daunting odds, has done what Israel has achieved since its inception in 1948. So, in honor of its birthday, here are 68 reasons to respect, if not always love, the world’s one and only Jewish country.

1) Israel’s Save a Child’s Heart organization performs life-saving heart operations for children from around the globe — including many Palestinians — free of charge.

2) With its freedom of worship, Israel is the only country in the Middle East where the number of Christians is increasing.

3) Israel is the only country in the world that has more trees today than it had 50 years ago.

4) Israeli bank notes have Braille on them for the sight-impaired.

5) Israel has more museums per capita than any other country, including the world’s only one underwater.

6) Israel has its own day-long festival of love, called Tu B’Av.

7) Relative to its population, Israel has absorbed more immigrants than any other country, with newcomers from more than 100 countries.

8) Voicemail technology was developed in Israel.

9) The IDF is a leader in saving people trapped by natural and man-made disasters. On short notice, its search and rescue unit has operated in many countries (including Mexico, Kenya, India, Turkey and the U.S.) following earthquakes, train wrecks, collapsed buildings and terrorist attacks.

10) Israel is home to the world’s only theater company comprised entirely of deaf and blind actors.

11) Life expectancy in Israel is among the highest in the world, at 82 years.

12) Coffee and cafés are so good in Israel that it’s the only country where Starbucks failed trying to break into the local market.

13) On a per capita basis, Israel tops the list of countries when it comes to the annual production of scientific papers.

15) Israel has won more Nobel Prizes than all other Middle East countries combined.

16) Israel regularly offers free medical care to Syrians wounded in their civil war. At physical risk, the IDF has rescued more than 2,000 people (including many fighters who are sworn enemies of Israel) on its northeastern border and transferred them to Israeli hospitals.

17) Israel is the only country that revived an ancient, unspoken tongue, Hebrew, to be its national language.

18) One of the holiest sites and international centers of the Bahai faith is located in Haifa in northern Israel.

19) In a region where LGBT people are persecuted, Israel is the only country where they enjoy such a level of civil rights.

20) In Israeli hospitals, Jewish and Arab doctors work together, treating patients of all faiths.

21) More than 90% of Israeli homes use solar power to heat their water.

22) On Yom Kippur, almost the entire country shuts down for 24 hours: all stores, cafés, restaurants and other places of entertainment. Traffic is halted as children take over the streets on their bicycles.

23) The Israel Guide Dog Center for the Blind assists all citizens, regardless of race or creed, with 24/7 canine accompaniment, at no cost, to help the sight-impaired gain independence and mobility.

24) First launched in Israel in 2011, bus-stop mini-libraries, offering books free of charge, have inspired similar initiatives in other countries.

25) Israel has the highest proportion of water used for irrigation that comes from recycled wastewater.

27) UNESCO declared Tel Aviv a heritage site for its 4,000 surviving Bauhaus buildings erected in the 1930s and 40s.

28) Beersheba, in Israel’s Negev desert, has the largest number of chess grandmasters per capita than any other city in the world.

29) In 2012, Israel became the first country to prohibit the use of underweight models in fashion shows.

30) Security measures (much of them unseen) at Ben Gurion Airport are the best in the world.

31) Such is the strength of family values that Friday night dinners with extended family are a near-sacred weekly fixture, even for those who consider themselves hip and cool.

32) An Israeli start-up invented a non-touch, radiation-free device, Babysense, that prevents crib death by monitoring a baby’s breathing and movement during sleep.

33) Israel’s unofficial national sport is a popular paddleball beach game called Matkot. It’s played by men and women of all ages and fitness levels. There are no winners or losers, just two people trying to sustain a rally.

34) Israel has the world’s highest rate of university degrees on a per capita basis.

35) Bob Dylan’s official 2013 video for his iconic 1965 song “Like A Rolling Stone” was hailed as revolutionary. The interactive clip, which allows viewers to switch through 16 channels on a virtual TV, is the work of a Tel Aviv start-up called Interlude.

36) Israel developed the technology that allowed for the original cell phone.

37) The Mount of Olives in Jerusalem is the world’s oldest continuously used cemetery.

38) There’s no capital punishment, even for terrorists who carry out pre-meditated mass murder of unarmed children and adults.

39) Israel has more orchestras per capita than any other country.

41) Israel’s most recent victory in the Eurovision song contest was by a transgender pop star.

42) Israel has taken great risk – often in covert, dangerous operations – to rescue Jews in distress around the world, such as in Yemen, Ethiopia and Iraq.

43) Despite a high cost of living, there are relatively few beggars and homeless people on Israeli streets.

44) Israel’s dairy cows are unrivaled in their annual production of milk (averaging 25,430 pounds of milk per year).

46) Israel places such a high value on the lives of its citizens that it often goes to extraordinary lengths to win their freedom. It has engaged in wildly lopsided deals, exchanging up to 1,500 Palestinian security prisoners (many mass murderers) for a few soldiers and to retrieve the bodies of others.

47) Many popular American TV shows originated in Israel. “Homeland,” “In Treatment” and “Rising Star,” among others, were based on Israeli programs.

48) Salim Joubran, an Israeli Arab judge, became a permanent member on the country’s Supreme Court in 2004. He was the first Arab to chair the Central Elections Committee.

49) Israel has more in-vitro fertilization per capita than any other country, and it’s free.

50) Numerous studies show Israel as one of the best countries in which to raise children.

51) Israelis are famous for being argumentative and yelling at each other in disputes but relatively few throw punches or threaten to sue.

52) There’s only one significant freshwater lake in Israel, known outside as the Sea of Galilee, and locally as Lake Kinneret. It’s the world’s lowest freshwater lake and provides most of the country’s drinking water.

53) Israeli engineers invented a new form of drip irrigation that minimizes the amount of water needed to grow crops.

54) Given its tiny size and small population, Israel sometimes feels like one big family. A collective spirit reigns, like in few other places.

55) A Jerusalem high-tech company specializing in artificial vision has invented a tiny camera to help drivers navigate more safely. The device, called Mobile Eye, is being built into many new cars around the world.

56) The Weizmann Institute has developed treatment that offers new hope for prostate cancer patients in 2016. Targeting tumors without damaging a man’s genitalia, urinary tract or quality of life, the treatment has so far proven effective.

57) You can’t escape the news in Israel. Everyone talks about it and bus drivers play the radio for all to hear, including the hourly newscasts.

58) A device developed in Israel is providing people suffering from glaucoma with relief and an effective alternative to traditional surgery.

60) The popular mobile mapping program, Waze, was developed in Israel. Google purchased the GPS-based navigation app in 2013 for a reported $1.3 billion.

61) Israelis are incurably direct and informal, even with those they don’t know. Usually with good intentions and a helpful spirit, they have a penchant for offering unsolicited advice on how you can do something better.

62) Sesame-seed paste is a staple of the Israeli diet. Known as tahina or tahini, the country produces it in two-dozen flavors and more than 50 flavors of the tahini-based treat called halva, selling it around the world.

63) It’s harder to be lonely in Israel as strangers strike up conversations with each other in public, and enjoy inviting people for holiday meals.

64) Passengers on Israel’s national airline El Al clap for the pilots when their flights touch down at Ben Gurion Airport near Tel Aviv.

65) In a country where disaster can strike suddenly, spontaneity often trumps advance planning as part of a live-for-now approach.

66) In 2011, after years of being attacked with rockets from the Gaza Strip and Lebanon, Israel unveiled the Iron Dome air defense system, which intercepts and destroys short-range missiles and mortars.

67) Israelis show one of their best sides when it comes to lending a helping hand to friends — and strangers.

68) Despite the tough neighborhood they live in, numerous studies rank Israelis among the happiest people among Western nations.

If all this doesn’t constitute a success story, I don’t know what does. Given the indomitable spirit, boundless ingenuity, resourcefulness and determination of Israel, there’s every reason to believe it will continue. And the world should be thankful it does.

Robert Sarner is a communication specialist in Toronto. He worked as a journalist for many years in Israel and France.

68 Reasons To Respect, If Not Love, Israel On Its 68th Birthday