Adelson’s Money Puts Us All in Bed with Trump 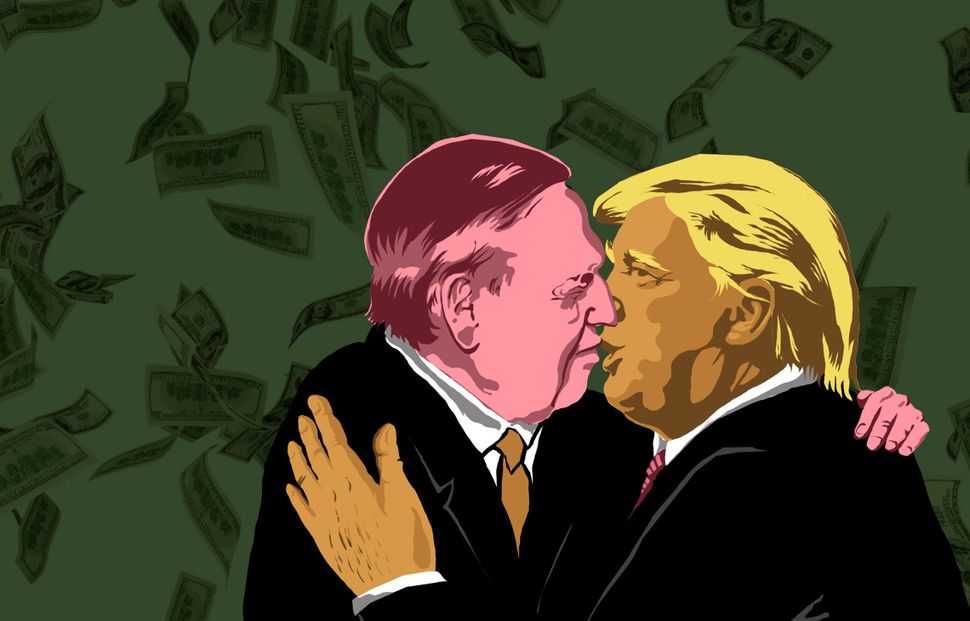 Now that Sheldon Adelson, one of the richest Jews on the planet, has endorsed Donald Trump and pledged to spend lots of his considerable fortune to elect the presumed Republican nominee for president, how should the Jewish community react?

What a silly question, you might say. Why should the Jewish community have a response one way or another? Adelson is free to throw his money in any political direction he desires. He lavished $90 million on the last presidential election trying to unseat Barack Obama, futile though it was. Now he’s willing to put up more — some reports say in excess of $100 million. So? That’s America these days.

But America these days has in Trump a major party candidate unlike any we have seen, maybe ever. His views on core issues and constituencies are not just unorthodox — they violate deeply held American values, which also happen to be Jewish values. His language is not just coarse and inflammatory — it is bigoted and offensive.

And, perhaps most troubling in this particular context, Trump’s unwillingness to distance himself from rising anti-Semitism among his supporters and his refusal to accept responsibility for this dangerous and ugly surge would ordinarily be enough to delegitimize him in the eyes of the Jewish establishment. Sports announcers and fashion designers have lost their jobs for less.

Instead, Adelson wrote, on May 13 in The Washington Post, “I am endorsing Trump’s bid for president and strongly encourage my fellow Republicans — especially our Republican elected officials, party loyalists and operatives, and those who provide important financial backing — to do the same.”

No mention of Trump’s racist policies, bigoted campaign rhetoric or anti-Semitic supporters. Trump is a (supposedly) successful CEO, and he’s not Hillary Clinton. That, apparently, is enough for Adelson.

The problem here is that Adelson is not just another billionaire who dabbles in politics. He is, as the Forward detailed in 2014, a philanthropist like no other in the Jewish community. Along with his ideologically driven political donations, he and his wife Miriam support numerous worthwhile charitable endeavors in education, medical research, elder care — and, of course, Israel. His massive cash infusion into Taglit-Birthright Israel in 2007 enabled the highly popular program to stabilize and grow.

So should the day schools, medical facilities and museums turn away Adelson’s money? Is it tainted by the touch of Trump? And if not, where should the line be drawn?

We live in a culture where our values are expressed through commerce — what we purchase or don’t; where we invest or don’t; what we support through charitable donations and what we withhold through boycotts and sanctions.

Trump’s likely nomination has raised the political stakes of this dynamic. Major corporations, including Apple, Google and Wal-Mart, are nervously grappling with whether to scale back or forgo funding of the Republican National Convention in July, since Trump is the likely nominee.

Coca-Cola already reduced its funding dramatically, and won’t say why. But a petition drive is trying to push companies in that direction, arguing that donating to the Cleveland convention is akin to endorsing Trump’s “hateful rhetoric and racist pandering.”

Usually reliable Republican mega-donors, from the Koch brothers to Paul Singer, are also keeping their distance from Trump. (Not to mention the last two Republican presidents.) Adelson is running the other way, not only embracing the controversial candidate, but also urging others to join the group hug.

How can the rest of us express our displeasure? It’s spiteful and self-defeating to tell a Jewish day school or a drug treatment center to send back Adelson’s millions just to make a fleeting political statement. But we can and should do more than simply watch this desecration of our values unfold on the political stage.

First, we should speak out. That’s simple to do in liberal Jewish bastions, yet it’s probably not very impactful; I could say I’m going to swear off donations from Adelson, but that wouldn’t mean much, because, well, he’s not offering! Speaking out is harder, and more meaningful, for those who inhabit the same political orbit as Adelson. So when Jewish Republicans in the media take a powerful stand, we should vocally support them. I’ll start by saying that I’ve been impressed with the way Jonathan Tobin at Commentary and Jennifer Rubin at The Washington Post have maintained a serious critique of Trump from their conservative, pro-Netanyahu perspectives.

We also need to create a mechanism to isolate the other rich folks who, like Adelson, are playing an outsized role in trying to elect Trump. Again, I suspect that the most effective way to drive home this message will be from within Republican Jewish circles, from those who resist Adelson’s calls to join him and who won’t share a platform or legitimize a noxious statement. We who are outside those circles should reach across the partisan divide and, yes, praise them when they do.

Finally, we should insist that our organizations call out intolerance by name. Among Jewish groups, the Anti-Defamation League has been especially vocal and specific, issuing five statements or press releases that criticized Trump in the past six months, according to our Nathan Guttman. “The bottom line for us is that these ideas have no place in the mainstream and we’ll do what we need to make sure that folks understand that,” the ADL’s new CEO and national director, Jonathan Greenblatt, told the Forward.

Each one of us, in our own way, needs to call out the stunning hypocrisy at work here. How can one of our wealthiest philanthropists flout Jewish values with impunity?

Adelson’s Money Puts Us All in Bed with Trump