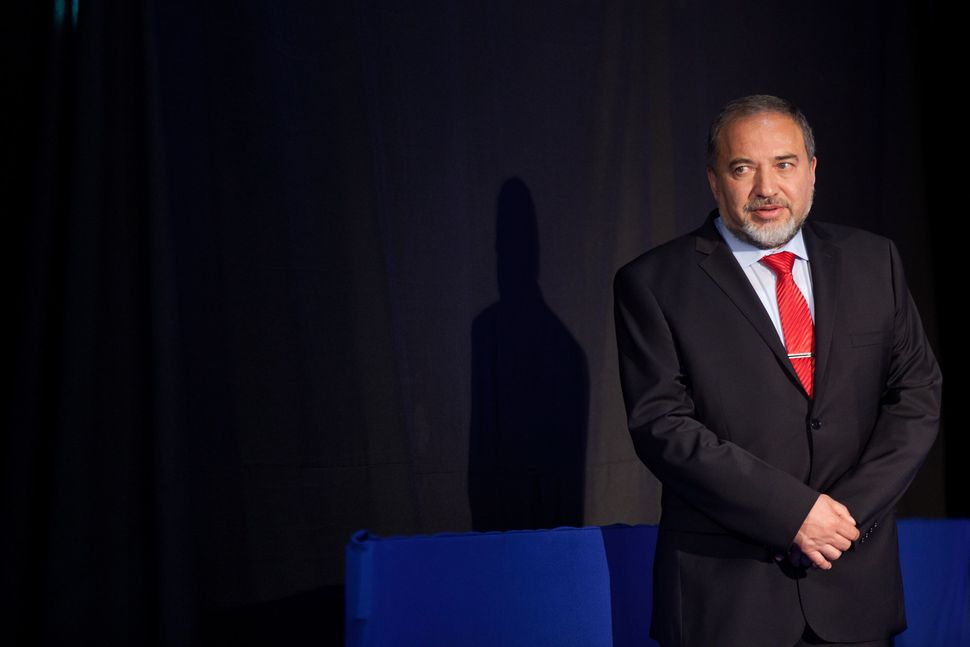 (JTA) – He was an outspoken politician with little military experience, appointed by a rival and promising to bring a new approach. Current and former officials at the Defense Ministry called his appointment an “enigma,” fretting that “it will take some time until he understands how things work” and that “he’ll have to undergo basic training.”

The subject of that criticism wasn’t Avigdor Lieberman, the hard-line nationalist with scant army experience who was offered the defense portfolio in a surprise move Wednesday. It was Amir Peretz, the last non-general to hold the post, briefly, from 2006 to 2007.

Peretz and Lieberman don’t actually have much in common. Before serving as defense minister Peretz, who hails from the Gaza border area, was the head of the Labor Party and the chairman of Israel’s Histadrut Labor Federation. He’s known as a dove who supports Israeli-Palestinian peace.

Lieberman, who lives in a West Bank settlement, is head of the hawkish Yisrael Beiteinu party. His peace plan includes drawing Israel’s border to exclude a large portion of its Arab citizens.

But Lieberman would do well to avoid the mistakes of Defense Minister Peretz, who is remembered for alleged mismanagement of the army and helping to launch a controversial war. Peretz campaigned in the March 2006 election on his forte, social and economic issues, but took the defense post after his party finished second at the ballot box and joined a coalition led by the centrist Kadima party.

He was challenged immediately when Hamas kidnapped Israeli solider Gilad Shalit on the Gaza border that June, and Hezbollah kidnapped and killed two soldiers on the Lebanese border in July. The 2006 Lebanon War that followed saw 165 Israelis die in what was seen as a poorly executed campaign.

Peretz resigned after a government-commissioned report in 2007 blamed Israel’s leadership for “serious failings and flaws in the lack of strategic thinking and planning.” One of the lasting images of his tenure was an infamous photo of Peretz surveying troops through binoculars with the covers still on the lenses.

Lieberman is a brash hawk who has inserted himself into Israel’s security discourse by lambasting Prime Minister Benjamin Netanyahu for allegedly hesitating during the 2014 Gaza war and by calling for instituting a death penalty for terrorists. In March, he came out in support of Elor Azaria, the soldier who shot and killed an immobilized terrorist in Hebron.

Just as defense officials challenged Peretz, the current defense minister, Moshe Yaalon, has not been afraid to suggest concern about his apparent replacement. On Thursday, he said Israel had “lost its moral compass.” Yaalon, a former left-winger who shifted right, has alienated his base by criticizing Azaria and defending an Israel Defense Forces official who compared Israel to 1930s Germany. But few doubted Yaalon’s security credentials.

Lieberman and Peretz aren’t the only defense ministers to take the post sans senior combat experience. Shimon Peres wasn’t a general, and neither was Moshe Arens, both of whom served in the 1990s. But Peres served as director general of the Defense Ministry in the 1950s, while Arens held a senior post in Israel Aircraft Industries, which supplies the military.

Despite his dearth of military chops, Lieberman has already won words of welcome from right-wing politicians, but will now face the challenge of proving he can handle Israel’s top security post. On Wednesday, Bar-Ilan political science professor Shmuel Sandler told JTA “Lieberman will have to be flexible to gain the trust of the army.”